Russian Defence Minister Sergei Shoigu has ordered his troops to withdraw from the west bank of the Dnieper River in the face of Ukrainian attacks near the southern city of Kherson, a significant retreat and potential turning point in the war.

Prior to the Wednesday order, Kyiv’s forces had made significant advances in recent weeks through Kherson province or oblast, the gateway to the Crimea Peninsula that Russia annexed in 2014.

Here is a timeline of key developments in Kherson:

March 5: Several thousand protesters demonstrate in the city’s main square, chanting: “Kherson is Ukraine”. Protests by residents continue on and off in the coming days and weeks.

March 15: Russia says its forces have taken full control of the Kherson region.

May 25: Putin offers fast-track Russian citizenship to residents of Kherson and the adjacent Zaporizhzhia region.

June 24: A senior official in the Russian-installed administration of Kherson is killed in an apparent assassination.

July 10: Ukraine urges civilians in the Kherson region to evacuate ahead of a planned counteroffensive by its forces.

July 20: The Antonivskyi bridge – one of only two crossing points for Russian forces into territory they have occupied on the western bank of the Dnieper – is damaged by Ukrainian shelling.

September 12: Ukraine’s southern military command says its forces have recaptured some 500sq km (193sq miles) of territory in the Kherson region as part of a wider counteroffensive. 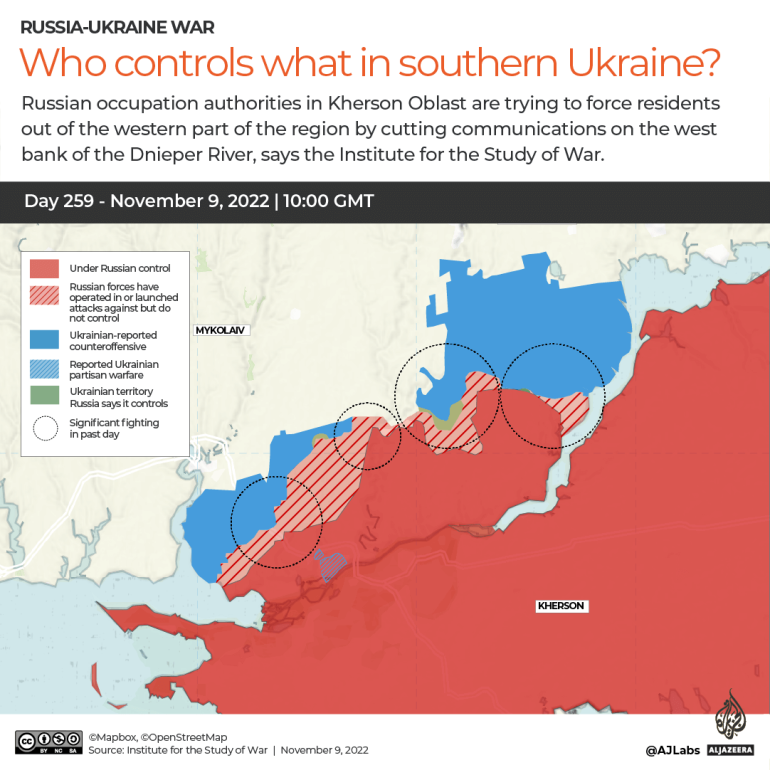 September 23-27: Russia stages what it says are referendums in four Ukrainian regions including Kherson on whether they wish to join Russia. Kyiv and the West condemn the votes as illegal.

September 30: Putin signs treaty documents formally annexing the four regions after Moscow said majorities of up to 99 percent had voted in favour of joining Russia.

October 3: Ukraine retakes a number of villages along the Dnieper River in its biggest breakthrough in the south since the war began, threatening Russian supply lines.

October 13: Governor Saldo urges residents in Kherson to take their children and leave for safety amid increased Ukrainian shelling.

October 21: Ukrainian President Volodymyr Zelenskyy urges the West to warn Russia not to blow up the Nova Kakhokva dam in Kherson, saying it would flood a large area of southern Ukraine. Moscow accuses Kyiv of planning to destroy the dam and then blame Russia for it.

Late October – Ukrainian forces who are dug into the north of Kherson city exchange regular rocket, mortar and artillery fire with Russian troops.

November 1: Russia orders civilians to leave a swathe of land along the eastern bank of the Dnieper. Kyiv says this amounts to a forced depopulation of occupied territory, a war crime.

November 3: Kirill Stremousov, the Russian-installed deputy civilian administrator of the Kherson region, says Russian forces are likely to abandon their foothold on the Dnieper’s west bank. If confirmed, this would signal a significant Russian retreat. Kyiv says it is still fighting in the area and is wary that Moscow could be setting a trap by feigning a pull-out.

November 4: Putin publicly endorses the evacuation of civilians from parts of the Kherson region.

November 6: The Russian-installed regional administration says that a number of settlements, including Kherson city, have lost water and power supplies, blaming an act of “sabotage”.

November 8: The Ukrainian military accuses Russian troops of continuing to loot and destroy infrastructure in Kherson.

November 9: Stremousov, the Russian administrator of Kherson, is reportedly killed in a car crash. Russian Defence Minister Sergei Shoigu orders his troops to withdraw from the west bank of the Dnieper River near Kherson city.