From intercontinental ballistic missiles (ICBMs) to hypersonic weapons that can potentially evade defences, and rockets fired from railcars, submarines and road-mobile launchers, North Korea has carried out a record number of missile tests this year.

It is also believed to be preparing for its first test of a nuclear weapon in five years.

For Leader Kim Jong Un, these weapons — which he has pursued in defiance of some of the world’s toughest sanctions — are crucial to defending his rule against any potential attacks from what he views as “hostile forces”, in essence, the United States and South Korea. Some analysts believe Kim’s ultimate goal may be to invade South Korea — as his grandfather Kim Il Sung unsuccessfully tried to do in 1950 — and to deter Washington from coming to Seoul’s aid in the event of war.

And although the 38-year-old leader initially appeared open to disarmament, he firmly shut that door in September, declaring North Korea’s status as a nuclear-armed state “irreversible” and approving a new law that enshrined the right to use a preemptive atomic attack.

“Through unheard of sanctions and blockade(s) … they are trying to lead us but to give up the nuclear weapons of our own accord,” Kim told a session of the country’s rubber-stamp parliament on September 8.

What will a seventh nuclear test involve?

Four of North Korea’s six nuclear tests have taken place under Kim, who assumed power in 2011.

All of these detonations have happened at the Punggye-ri site, a mountainous area in North Hamgyong province. The first atomic test in October 2006 measured less than one kiloton, while the last one in September 2017 had an estimated force, or yield, of up to 250 kilotons. That is at least 16 times more powerful than the 15- to 20-kiloton bombs that the US used to destroy Japan’s Hiroshima and Nagasaki in 1945. 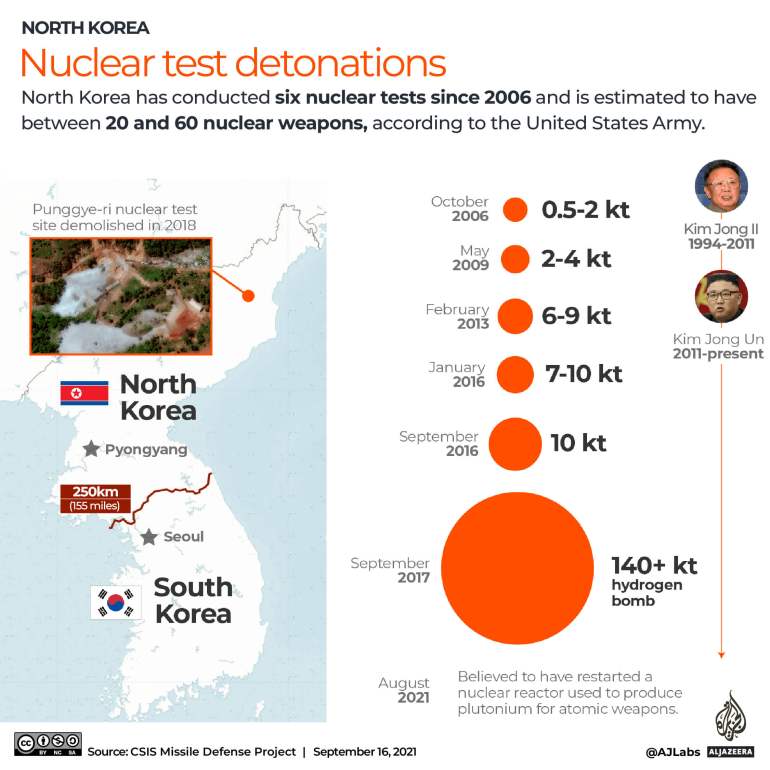 Hans Kristensen and Matt Korda at the Bulletin of the Atomic Scientists estimate that Pyongyang may currently possess enough fissile material — the core material in atomic bombs — to build 45 to 55 nuclear weapons and may now have assembled 20 to 30 warheads.

Others believe the numbers may be higher.

Vann Van Diepen, an expert on weapons of mass destruction and non proliferation at the Stimson Center, told Al Jazeera that the expected test could involve the detonation of a “super-sized” nuclear warhead with a larger yield than the last bomb. Or it could involve a smaller and more light-weight “miniaturised” warhead that can be fitted on short-range missiles for “tactical” or battlefield use. Possessing this ability could also allow North Korea to mount several such warheads on one ICBM, allowing a single missile to strike several targets at once.

Van Diepen said North Korea would need to engage in many more tests in order to obtain such a “tactical nuke”.

He also cautioned that even when the detonation takes place, “we may or may not be able to figure out what it is they tested, because on the outside, there’s very limited information available about what happens in one of these tests, and therefore, what they might be testing”.

Can North Korea strike South Korea, Japan and the US?

While North Korea has dozens of nuclear bombs, it is not clear if it has the ability to deliver those weapons to enemy targets in South Korea, Japan and the US.

Experts say this ability rests on several criteria. First, North Korea needs to develop missiles that can fly those distances, and second, it needs to be able to fit its nuclear weapons on to these short, medium and long range missiles.

They say it has had missiles that can strike its neighbours for decades now, and in 2017, demonstrated a capacity to fly a missile as far as continental US, with a successful test of the Hwasong-15, a rocket that reportedly has a range of 12,874km (8,000 miles). In March of this year, North Korea also claimed to have tested a missile with an even longer range, the Hwasong-17 or “monster missile”. 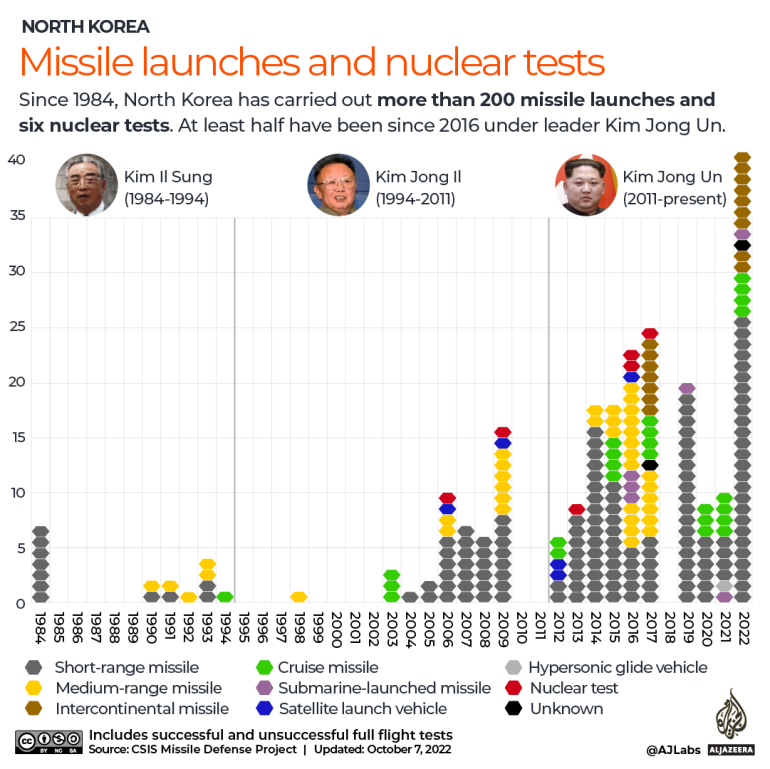 But there is uncertainty over whether North Korea can miniaturise its nuclear bombs so they can fit inside the nose of its missiles.

A United Nations panel of experts reported last year that an anonymous member state had assessed that North Korea does indeed have the ability to mount nuclear warheads on its short, medium, and long-range ballistic missiles.

If this is true, it means Pyongyang has nuclear-tipped missiles that can strike its neighbours.

But there remain additional questions over its ability to hit the US.

This third aspect has to do with its ICBM technology.

Once launched, these projectiles travel into outer space and then re-enter the Earth’s atmosphere before plunging rapidly to hit their targets.

Experts say Pyongyang is yet to show whether it can manufacture a heat shield capable of protecting a nuclear device during a violent atmospheric re-entry.

John Tierney, the executive director of the Center for Arms Control and Non-Proliferation, said some experts do not believe “North Korea has yet mastered any ability to actually miniaturise and place a weapon successfully” on an ICBM, and they also doubt whether it has perfected “an ability of the missiles to successfully withstand re-entry speeds and temperatures”. He noted that North Korea’s most recent ICBM test was judged to be a failure but said concerns exist as Pyongyang is “continuing to test and improve at a fairly quick pace”.

Others say that although North Korea has not yet tested a re-entry vehicle, it may still possess this capacity.

“They have not sent out vessels with telemetry capabilities to track missiles coming down into the water,” said Mark Fitzpatrick, associate fellow at the International Institute for Strategic Studies. “And because we have not seen this re-entry capability, some people say North Korea doesn’t know how to do it. But I believe they probably can, that their engineers, their scientists are capable. And they’ve done so many missile tests that even though they haven’t had a reentry test, per se, they probably can do it.” 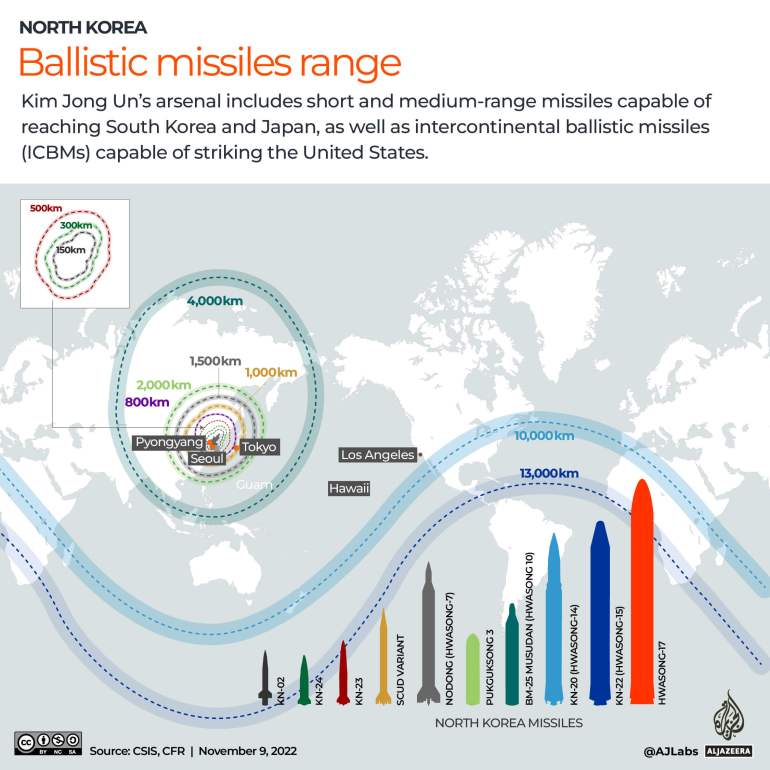 Other capabilities that North Korea has sought to advance this year include missile manoeuvrability or ability to evade defences, as well as launches from different platforms, including railway carriages and a new experimental submarine, all of which may make it difficult for enemies to detect and destroy these weapons.

North Korea has also tested missiles that are solid-fuelled, a technology that makes the rockets easier to transport and faster to launch than liquid-fuelled ones.

Despite these reported advances, experts note that the US – which has bases and troops in South Korea and Japan – retains an overwhelming nuclear and conventional military superiority over North Korea.

So, in effect, he said he expected there to be a kind of “mutual deterrence” in Northeast Asia, where “North Korea will deter US from launching a preemptive war and the US will deter North Korea from using nuclear weapons”.