Ukraine has accused Russia of looting empty homes in the southern city of Kherson and occupying them with troops in civilian clothes to prepare for street fighting ahead against Kyiv’s army.

In recent days, Russia has ordered civilians out of Kherson in anticipation of a Ukrainian assault to recapture the city, the only regional capital Moscow has seized since its invasion in February.

Kherson, with a prewar population of nearly 300,000, has been left cold and dark after power and water were cut to the surrounding area over the past 48 hours, both sides said.

Russian-installed officials blamed Ukrainian “sabotage” and said they were working to restore electricity. Ukrainian officials said the Russians had dismantled 1.5km (0.9 miles) of power lines, and electricity probably would not return until Ukrainian forces recapture the area.

Kyiv has described the evacuation of the area as a forced deportation, a war crime. Moscow says it is sending residents away for safety and denies abusing civilians.

Kherson lies in the only pocket of Russian-held territory on the west bank of the Dnieper River that bisects Ukraine. Recapturing it has been the main focus of Ukraine’s counteroffensive in the south, which has accelerated since the start of October.

Ukrainian forces on the nearby front line have told the Reuters news agency in recent days that they expect a bitter fight against Russian troops determined to exact a blood price before being forced out.

“While Kherson residents are being forcibly deported from their homes, talking about ‘evacuation’, ru-military and FSB officers are doing what they love most – robbing their houses,” Ukrainian presidential adviser Mykhailo Podolyak tweeted on Monday.

Ukraine’s military said in an overnight update that Russian forces, “disguised in civilian clothes, occupy the premises of civilians and strengthen positions inside for conducting street battles”.

The situation inside Kherson could not be independently confirmed.

Meanwhile, Ukraine announced on Monday that it had received more air defence systems from Western military allies, as officials in Kyiv said the situation with electricity supplies was “tense” after protracted Russian attacks on energy facilities.

“NASAMS and Aspide air defence systems arrived in Ukraine! These weapons will significantly strengthen the Ukrainian army and will make our skies safer,” Reznikov said on social media.

Attacks by Moscow’s forces, including with Iranian-made drones over the past month, have destroyed about 40 percent of Ukraine’s power stations and the government has urged Ukrainians to maximise electricity savings.

The defence ministry, meanwhile, said it was requisitioning several energy and manufacturing companies “of strategic importance” to guarantee sufficient supplies for the military to fend off Russia’s invasion. 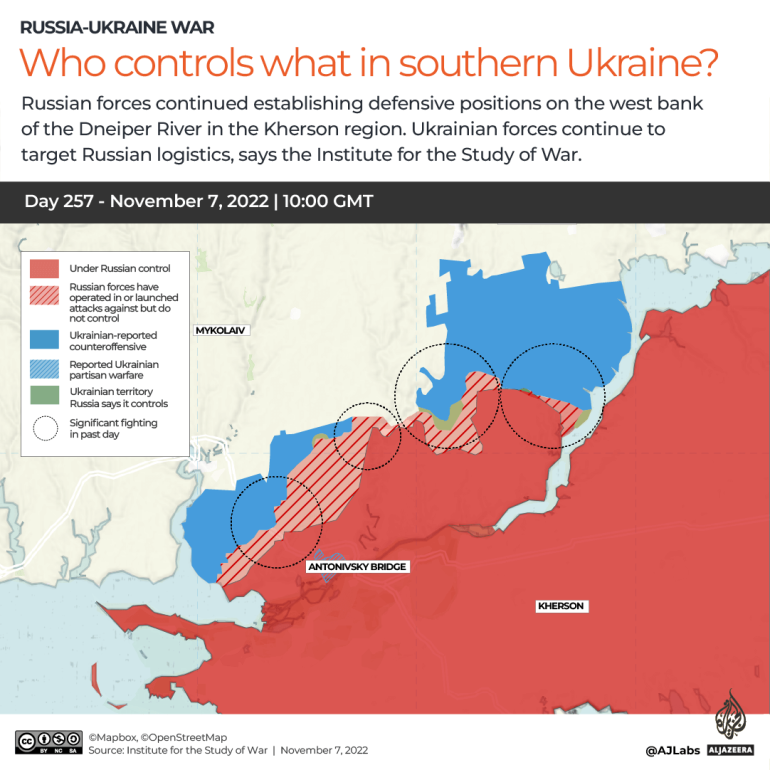 On the diplomatic front, both the White House and Kremlin declined to comment on a report in the Wall Street Journal that US National Security Advisor Jake Sullivan had held talks with aides to Russian President Vladimir Putin, aiming to reduce the risk of the war escalating.

Podolyak said Ukraine was ready to negotiate an end to the war with a future Russian leader but not Putin, after a Washington Post report that the United States had urged Kyiv to signal a readiness for peace talks to ensure it retains Western support.

“Ukraine has never refused to negotiate. Our negotiating position is known and open,” Podolyak said on Twitter, adding that Russia should first withdraw forces from Ukraine.

“Is Putin ready? Obviously not. Therefore, we are constructive in our assessment: We will talk with the next leader of [Russia],” he said.