Leaders of the Group of 20 (G20) major economies have issued a declaration deploring “in the strongest terms” Russia’s aggression against Ukraine.

The final communique, approved on Wednesday after a two-day summit in Indonesia, said the majority of members strongly condemned the war in Ukraine, but noted there were other views.

It was noteworthy in highlighting the invasion given the divisions among the group, which includes not only Russia itself but also countries such as China and India that have significant trade ties with Moscow and have stopped short of outright criticism of the war.

The statement acknowledged “there were other views and different assessments” and said the G-20 is “not the forum to resolve security issues”.

International law must be upheld, the communique said, also condemning the threat of the use of nuclear weapons. It welcomed the Black Sea grain initiative as the war has prevented much-needed grain heading to world markets.

“Many members… expressed concern about the damage caused by the conflict on critical health infrastructure, as well as casualties in health care workers, which have disproportionately affected the most vulnerable, women and children,” said the declaration.

The war on Ukraine was hurting the global economy, it added. The communique also said members’ central banks would continue to calibrate the pace of monetary policy tightening.

Russian Foreign Minister Sergey Lavrov, who headed the Russian delegation to the summit in the absence of President Vladimir Putin, earlier in the week condemned “politicisation” of the G20 meeting.

UN Secretary-General Antonio Guterres, also in Bali for the summit, warned it was “absolutely essential to avoid escalating the war in Ukraine”.

His comments came after an explosion in Poland, a NATO member, which immediately sparked concerns the alliance might be drawn directly into Russia’s nearly nine-month war against Western-backed Ukraine.

Confusion surrounded the incident as to which side fired a missile into Poland that killed two people.

The blast was an attempt to spark a direct clash between Russia and NATO, the head of the permanent mission of Russia to the United Nations said on Wednesday.

“There is an attempt to provoke a direct military clash between NATO and Russia, with all the consequences for the world,” Dmitry Polyansky said on his Telegram channel.

Ukrainian President Volodymyr Zelenskyy told G20 leaders on Wednesday there was a “terrorist state” among them.

Speaking by video link, Zelenskyy called the strike on Poland “a true statement brought by Russia for the G20 summit”.

Poland has said there is no clear evidence on who launched the missile. The Associated Press quoted unnamed US officials as saying the missile may have been fired by Ukraine forces in an attempt to shoot down a Russian missile. 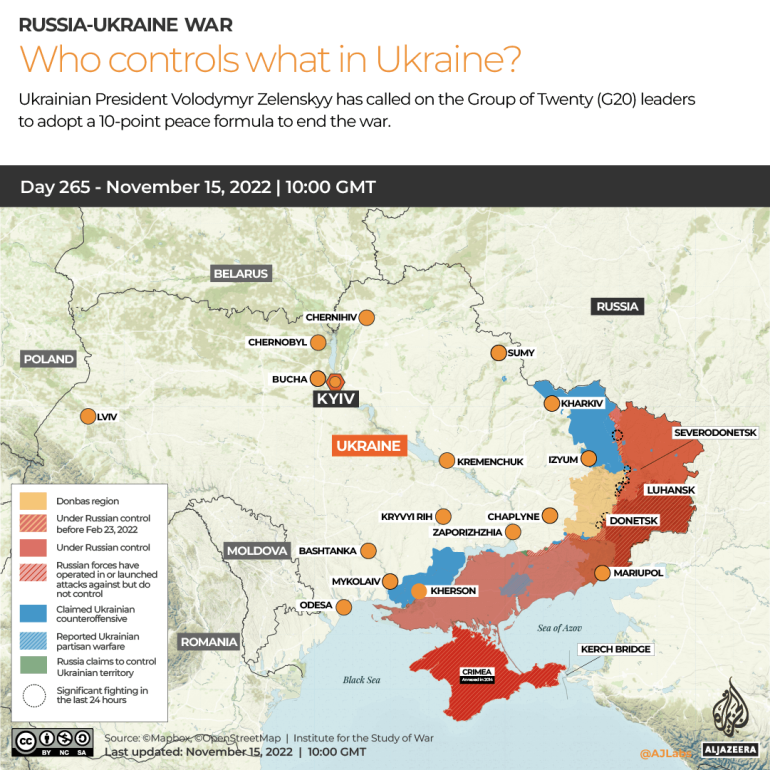 G20 leaders also agreed to pursue efforts to limit the rise in global temperatures to 1.5 degrees C (2.7 degrees F), including speeding up efforts to “phase down” the unabated use of coal.

“This will require meaningful and effective actions and commitment by all countries,” the declaration said.

International charity Oxfam denounced the G20 leaders for failing to address rising global poverty, noting the grouping represents two-thirds of the world’s population and four-fifths of the world’s economic power.

“In the midst of a debt, austerity and inequality crisis we expected far more from the world’s largest economies, especially given the meteoric rise of billionaire wealth in their backyards,” said Oxfam’s G20 lead Joern Kalinski.

“The world needs concrete action to avert economic disaster for poor people and countries, but all we were left with was a recycled assurances, a simmering debt crisis and vaccine and health steps as useful as putting a band aid on a broken leg.”