A Russian-made missile hit a Polish village near the border with Ukraine during the 38th week of the war, briefly raising the spectre of NATO involvement and a broader conflagration, as Russia faced losing even more ground in southern Ukraine after its withdrawal from Kherson.

Two people were killed on Tuesday when the missile hit NATO-member Poland.

It initially raised concerns that Russia had hit Poland either deliberately or with a stray missile, but on Wednesday, Warsaw and NATO said the explosion was likely an “unfortunate accident” caused by a Ukrainian air defence missile launched to intercept a barrage of Russian missiles.

NATO and Poland still said Moscow was ultimately responsible for the incident due to its attacks on Ukraine, and Warsaw said later it did not definitively rule out a “provocation” by Russia. Both Kyiv and Moscow have denied responsibility for the blast.

The incident came as Russia pummelled at least 12 cities across Ukraine with dozens of missiles on Tuesday, mainly targeting energy infrastructure and causing blackouts for millions of people.

Ukraine’s energy minister said it was the biggest bombardment of power facilities in the nearly nine-month-old Russian invasion.

The threat of a serious escalation in the war took place as China and the United States jointly condemned the threat of nuclear force on the sidelines of the G20 summit in Indonesia.

“[US] President [Joe] Biden and Chinese President Xi [Jinping] reiterated their agreement that a nuclear war should never be fought and can never be won, and underscored their opposition to the use or threat of use of nuclear weapons in Ukraine,” said a White House readout.

Ukrainian President Volodymyr Zelenskyy was strident in his condemnation of Russian nuclear threats in a virtual address to that summit.

“Russia has turned our Zaporizhzhia nuclear power plant into a radioactive bomb that can explode at any moment,” he said of Europe’s biggest nuclear plant, currently under Russian occupation.

While the West condemned the threat of nuclear war, it has continued to help Ukraine prosecute the conventional one.

The Netherlands said it would contribute 100 million euros ($104m) to a newly created International Fund for Ukraine (IFU) to finance military material for Ukraine.

On Tuesday, the European Union launched the EU Military Assistance Mission to Ukraine (EUMAM), whose initial purpose is to train 15,000 Ukrainian soldiers.

These initiatives, on top of other arms pledges, suggested Europe is preparing for months of war.

On the ground in Ukraine, Russia completed its latest retreat from territory it captured in February and March.

On November 9, Sergey Surovikin, the commander of Russian forces in Ukraine, said he was pulling out of the west bank of the Dnieper River and Kherson city in southern Ukraine. He planned to focus Russian strength on other fronts, he said.

On the same day as Surovikin’s announcement, Ukraine said it had recaptured 12 settlements in the Kherson region. By the following day, Ukrainian forces said they had advanced seven kilometres (4.4 miles) into that territory.

Ukrainian General Valerii Zaluzhny, was quick to claim Russia’s retreat as another victory.

“Significant efforts of our military are behind the so-called ‘goodwill gesture’ of the enemy. Just as the enemy retired from Kyiv and Kharkiv region, abandoned Zmiinyi [Snake] Island, the likely pullout from Kherson is the outcome of our active operations,” he said.

For weeks, Ukraine has been pounding Russian command bunkers and ammunition warehouses in the region with high-precision weapons.

By November 11, Ukraine’s general staff said their forces had reached the Dnieper River in several places in western Kherson, and exercised effective firepower over the rest of the territory west of the river.

By then, Russia claimed to have completed its retreat in an orderly fashion.

“All the Russian servicemen have redeployed to the left bank of Dnieper.”

“In the area of ​​the settlement of Dnipryany, a high-precision strike was carried out on a building where up to 500 occupants were located. According to its results, two trucks of dead invaders were taken to Tavriysk and 56 seriously injured people were taken to the nearest hospital, of which 16 more died soon after,” said a bulletin.

“Russian soldiers!” proclaimed a Ukrainian announcement. “Your commanders urge you to dress in civilian clothes and try to escape from Kherson on your own. Obviously, you can’t do this … Retreat paths of Russian occupants are under the fire control of the Ukrainian army … You have only one chance to avoid death – to surrender immediately.”

To slow the Ukrainian advance, Russia had destroyed two spans of the Antonovsky bridge and blown up the road running atop the Kakhovka dam – putting the two remaining routes across the Dnieper in Kherson out of action. 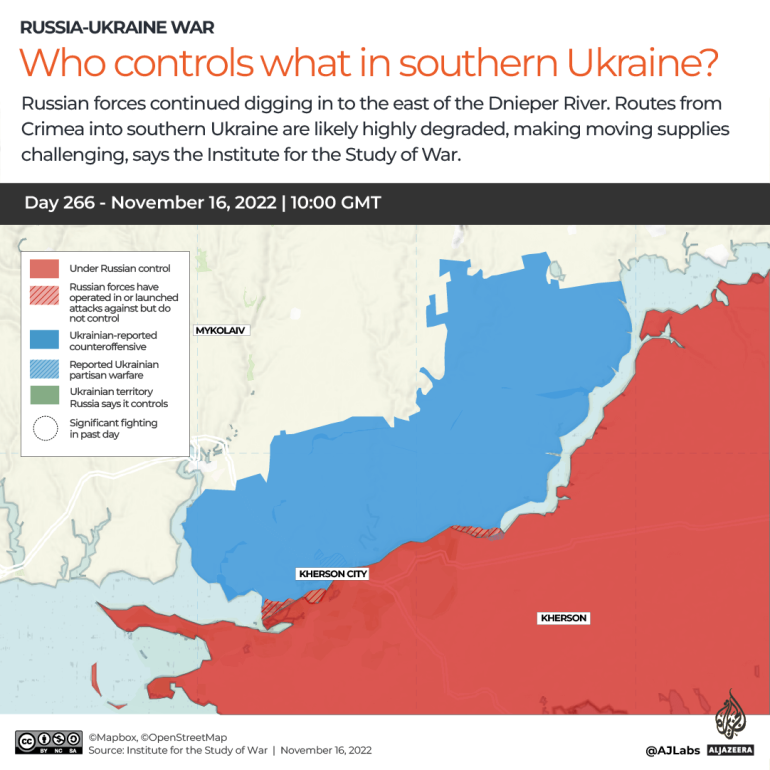 Ukrainian authorities are now working to make Kherson city safe from Russian mines, and to provide its remaining 80,000 residents with essentials such as heat, water, electricity, food and medicine as the harsh winter closes in.

Ukraine will likely next seek to drive east, through the rest of Kherson province. It could then head south into Russian-annexed Crimea, or continue east, into Zaporizhia.

Ukraine’s general staff reported an “increase in occupation troops in the Melitopol area,” the largest metropolitan area in Zaporizhia. “Fortifications and defensive buildings are being built around the perimeter of the city … columns are arriving at the city from the side of Tokmak.”

But Ukraine’s commander-in-chief has said he intends to recapture Crimea in 2023. Zelenskyy seemed to hint at that goal on Monday after he presided over the raising of the Ukrainian flag in Kherson city.

Zelenskyy said the liberation of Kherson city “can be compared with D-Day – the Normandy landings. It was not yet the finale in the fight against evil, but it already determined the entire subsequent course of events. This is exactly what we are feeling now. Now that Kherson is free”.