President Joe Biden’s Democratic Party has retained control of the United States Senate after winning a closely contested race in the state of Nevada.

Her victory over Republican challenger Adam Laxalt – who had been backed by former President Donald Trump – gives the Democrats the 50 seats they need for an effective majority. Vice President Kamala Harris will be able to break any ties in the 100-member chamber.

It was still unclear which party would control the House of Representatives as counting continued in razor-tight races in California and a smattering of other states. It could take several days or more before the outcome of enough House races is known to determine party control of that 435-seat chamber.

Democratic control of the Senate ensures a smoother process for Biden’s cabinet appointments and judicial picks, including those for potential Supreme Court openings.

The party will also keep control over committees and have the power to conduct investigations or oversight of the Biden administration, and will be able to reject legislation sent over by the House if the Republicans win that chamber. 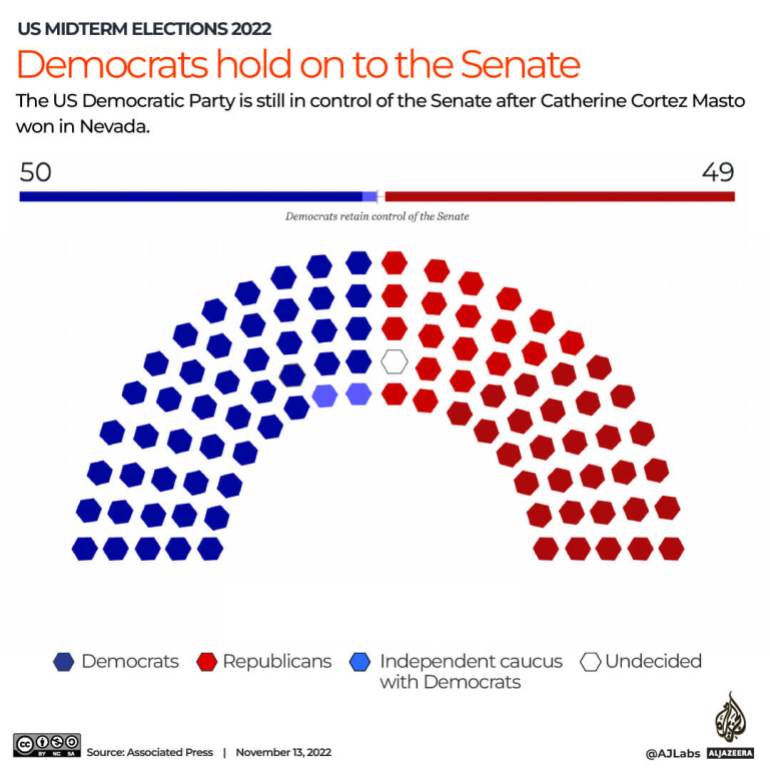 Biden, who was in Cambodia to attend a summit of Southeast Asian leaders, said he was feeling “good about where we are”.

“Again, I’m not surprised by the turnout. I’m incredibly pleased,” he told reporters. “And I think it’s a reflection of the quality of our candidates.

“We feel good about where we are. And I know I’m a cockeyed optimist.”

The Senate fight had hinged on a handful of deeply contested seats. Both parties spent tens of millions of dollars in Pennsylvania, Arizona, Nevada and Georgia, the top battlegrounds where Democrats had hoped that Republicans’ decision to nominate untested candidates — many backed by Trump — would help them defy national headwinds.

With the results in Nevada now decided, Georgia is the only state where both parties are still competing for a Senate seat. In the southern state, Democratic incumbent Senator Raphael Warnock will face Republican challenger Herschel Walker in a December 6 run-off.

A victory for Warnock would expand Democrats’ majority to 51-49.

“We got a lot done and we’ll do a lot more for the American people,” Senate Majority Leader Chuck Schumer said. “The American people rejected — soundly rejected — the anti-democratic, authoritarian, nasty and divisive direction the MAGA Republicans wanted to take our country.”

If Democrats now manage to pull off a win in the House, it would mean full control of Congress for Democrats — and another chance to advance Biden’s priorities, which he has said include codifying abortion rights.

Al Jazeera’s Mike Hanna, reporting from Washington, DC, said the Republicans continue to have an edge in the races for the House.

“But that lead has shortened somewhat, as there been some surprising Democratic Party wins in the past 24 hours,” Hanna said, referring to contests such as that in Washington’s third congressional district, where Marie Gluesenkamp Perez defeated Trump-endorsed Joe Kent.

“Even if Republicans do take control of the House, that will be by the slimmest of majorities,” Hanna added, noting this is far from the mighty “red wave” that the party had expected to ride heading into the midterm election.

Ahead of the vote, Republicans had focused relentlessly on the economy, a top concern for many voters amid stubborn inflation and high gas and food prices. But the Democrats were buoyed by voters angry about the Supreme Court’s decision in June that overturned the constitutional right to an abortion.

“Abortion played a much bigger role than we anticipated in motivating people over kitchen table or inflation issues,” said Adolfo Franco, a Republican Party strategist. “The second thing is only 7 percent of the electorate is now independent, four years ago was 12 percent. [This 7 percent] are heavily in favour of Democrats largely on social issues,” he told Al Jazeera.

Though the midterms failed to deliver Republican romps, Trump remains a key factor in the national party and plans to announce his third run for the presidency on Tuesday at his Mar-a-Lago estate in Florida — setting up a potential rematch for the White House with Biden.