Russia has again accused the United Kingdom of carrying out attacks on the Nord Stream undersea gas pipelines, with Moscow saying it is considering what “further steps” to take over the alleged acts of sabotage.

“Our intelligence services have data indicating that British military specialists were directing and coordinating the attack,” Kremlin spokesman Dmitry Peskov told journalists on Tuesday, without providing any evidence to support his claim.

“Such actions cannot be put aside. Of course, we will think about further steps. It definitely cannot be left like this,” he added.

Peskov’s remarks came after Russia’s defence ministry said on Saturday that British navy personnel had blown up sections of the Nord Stream 1 and 2 pipelines in September, when a series of ruptures caused major leaks, sending gas spewing out off the coast of Denmark and Sweden. 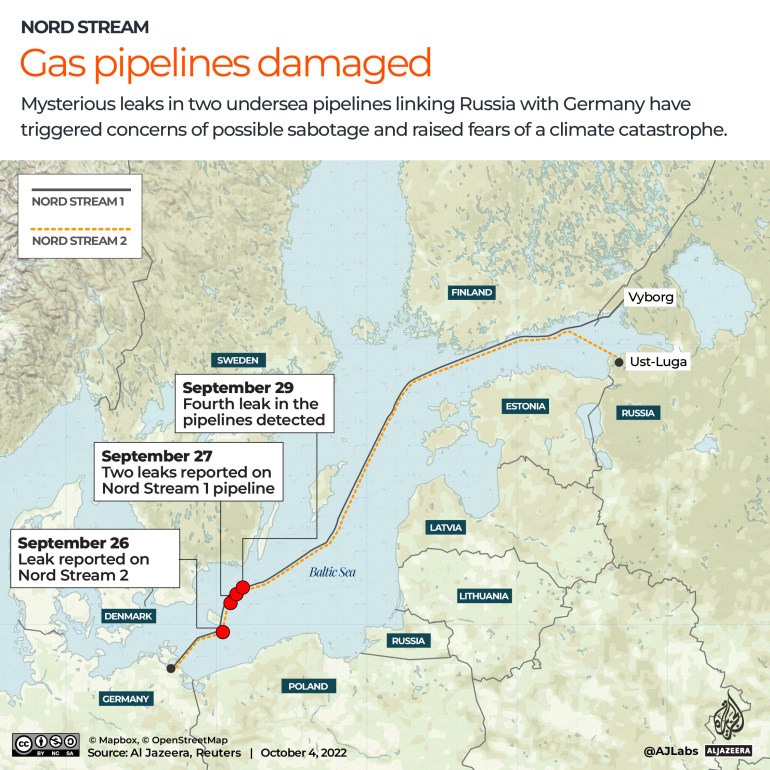 The UK has dismissed the allegations as false and said they are designed to divert attention away from Russian military failures in Ukraine, with British Prime Minister Rishi Sunak’s spokesman saying on Tuesday that the claims were part of the “Russian playbook”.

“Obviously, we’re carefully monitoring the situation, but it is right to not be drawn into these sorts of distractions which is part of the Russian playbook,” Sunak’s spokesman told reporters.

“They continue their indiscriminate bombardment of civilians and attacks on civilian infrastructure. That is our focus, and we will continue to provide support so that they lose this illegal war.”

The ruptures on the Nord Stream pipelines have threatened to put the multibillion-dollar gas link permanently out of use.

Peskov said no decision had been taken as of yet on whether to repair the Russian-controlled pipelines as Moscow is awaiting an expert assessment of the damage caused.

Sweden last week ordered additional investigations to be carried out on the damage.

Western officials have linked the ruptures to “sabotage”, but have held back from attributing responsibility for the blasts while investigations by German, Danish and Swedish authorities continue.

Russian President Vladimir Putin has repeatedly made unsubstantiated claims the United States and Ukraine’s Western allies were behind the explosions.