President Vladimir Putin has appointed General Sergey Surovikin to lead the war effort in Ukraine amid a series of military setbacks and growing discontent in Russia over the invasion of its neighbour.

The appointment on Saturday comes after the sacking of two Russian senior military commanders as Kyiv has won back territories lost to Russia in the northeast and south of Ukraine. It also comes as Moscow has suffered a big blow after the partial destruction of the Kerch Bridge – a key link between Russia and Crimea, which Russia annexed in 2014.

The general, born in 1966 in the Siberian city of Novosibirsk, was announced as the head of Russia’s southern military grouping in its war on Ukraine in June.

Surovikin received the title of Hero of Russia and was awarded a medal for his service in Syria in 2017, where he led the Russian military expedition as commander of the Aerospace Forces.

He is known for being totally “ruthless” in the Russian military, according to a report (PDF) by the Jamestown Foundation, a US defence policy think-tank.

“Surovikin made a stellar career in the top echelons of the General Staff and defence ministry after 2008, during the radical military reform that required ruthlessness,” read the report, adding that his “readiness to vigorously execute any orders trounced any potential questions about his checkered curriculum vitae”.

Surovikin was jailed twice. The first time was for six months after soldiers under his command killed three demonstrators in the Russian capital, Moscow, during the August 1991 coup that preceded the end of the Soviet Union. He was later released without trial. Four years later, he received a sentence – later overturned – for illegal arms trade.

The general was accused of overseeing a brutal bombardment that destroyed much of the city of Aleppo in Syria, where Russia intervened on the side of Bashar al-Assad. In a report published in October 2020, Human Rights Watch listed him as one of the commanders “who may bear command responsibility for violations” during the 2019-2020 offensive in Syria’s Idlib. 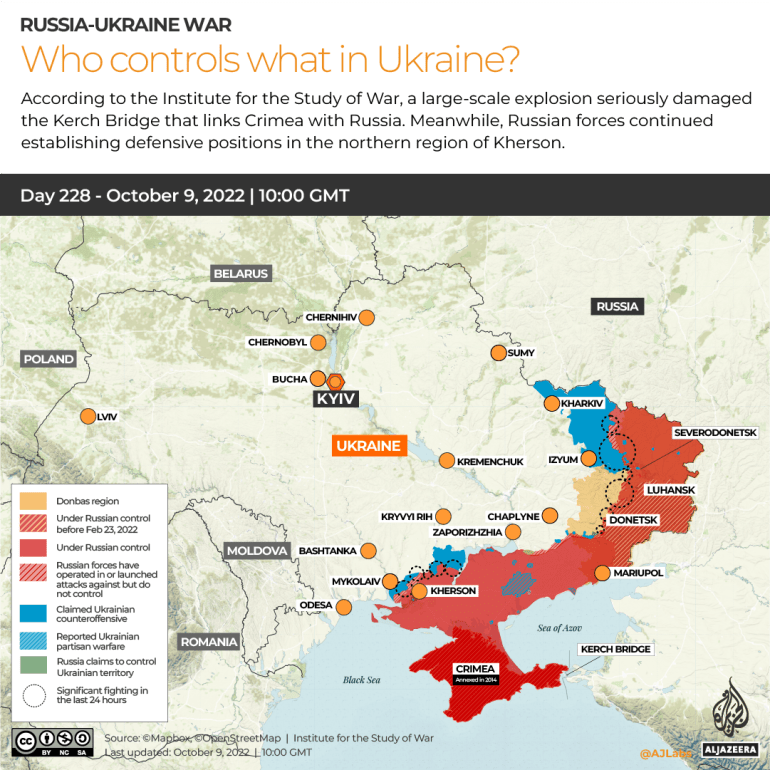 In a rare public comment, Yevgeny Prigozhin, founder of the Wagner mercenary group, which was heavily deployed in Syria, was quoted calling Surovikin “a legendary person”, by Live24 news agency. “Surovikin is the most competent commander in the Russian army”, he added.

‘A series of crushing defeats’

Russia has been reshuffling its forces in Ukraine as it tries to stem the losses it has been dealt as a result of a vigorous Ukrainian counteroffensive.

Some observers believe Surovikin’s appointment signals that Russia will concentrate its war effort on one area.

“It may be Luhansk, it may be Donetsk, it may be in the south. What we are seeing is a shrinking of the operation of Russia,” Alexandre Vautravers, from the Swiss Military Review said.

Russian forces were driven out of much of the northeastern Kharkiv region in early September by a Ukrainian counteroffensive that allowed Kyiv to retake thousands of square kilometres of territory.

Russian troops also lost territory in the southern region of Kherson as well as the Lyman transport hub in eastern Ukraine.

On Saturday, a Kremlin-backed official in Kherson announced a partial evacuation of civilians from the southern province.

Kirill Stremousov told Russia’s state-run RIA Novosti agency that young children and their parents, as well as the elderly, may be relocated to two southern Russian regions in anticipation of “a difficult period” to come for Kherson.

On Friday, Moscow said its forces captured ground in the eastern Donetsk region – the first claim of gains since Kyiv’s successful counteroffensive that has rattled Moscow’s military campaign.

Donetsk, partially controlled by Kremlin-backed separatists for years, is a key prize for Russian forces, which launched an invasion of Ukraine on February 24.