The ministry’s daily video briefing made no mention of any pullbacks on Tuesday, but the maps included showed that Russian forces were no longer in control of the village of Dudchany on the west bank of the Dnieper River, where Ukraine’s forces have been pushing to reclaim territory captured at the start of Moscow’s offensive.

In the northeastern Kharkiv region, defence ministry maps showed that Russian forces have left positions on the west bank of the Oskil River. They appeared to have retreated some 20km (12.4 miles) to the east, as far as the border of Luhansk province, in the aftermath this month of a counteroffensive by Kyiv’s army.

President Volodymyr Zelenskyy said on Tuesday that Ukraine’s military had made major, rapid advances against Russian forces and freed from occupation dozens of towns in the south and east of the country.

“The Ukrainian army is advancing in quite a rapid and powerful manner in the south of the country within the context of the current defence operation,” Zelenskyy said in his nightly video address.

He added that “dozens of population centres have been liberated. These are in Kherson, Kharkiv, Luhansk and Donetsk regions all together”.

The Ukrainian military claimed in a statement earlier on Tuesday that Russian forces in Kherson are “demoralised” and were falling back on their positions, destroying ammunition depots and bridges in their wake.

“All this in order to slow down the offensive of our troops,” the defence ministry said in their statement.

Ukraine’s Deputy Minister of the Interior Yevhen Enin said on Tuesday that Ukraine’s forces had recaptured 50 towns and villages in Kherson, without specifying when.

Kyiv’s forces have been slowly clawing back territory in Kherson for several weeks but the advance has accelerated in recent days.

With a population of one million before the war, Kherson is a key agricultural area and forms the gateway to the Crimean Peninsula – annexed by Russia in 2014.

The region’s main city, also named Kherson, was one of the first to fall to Russian forces after they launched what the Kremlin calls its “special military operation” in February.

Al Jazeera’s Hoda Abdel-Hamid, reporting from the central Ukrainian city of Kryvyi Rih, said Ukraine had taken Russia’s forces “by surprise” by advancing swiftly through the eastern Kharkiv region after announcing its intention to launch a major counteroffensive in Kherson.

“It was believed that it happened so quickly simply because the Russians had redeployed their forces from the northeast to the Kherson region, to reinforce their defensive lines there,” she said.

“But then, over the past few days, the Ukrainian army picked up momentum and managed to break through some of the Russian defensive lines in the north of the Kherson region.” 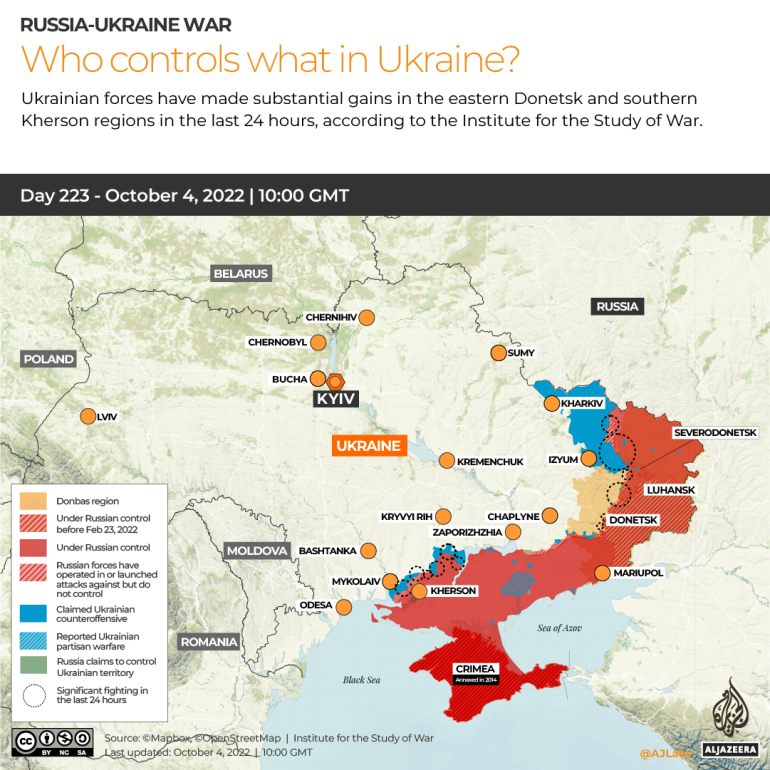 While the Ukrainian army has not released many details, there is evidence on social media of Ukrainian soldiers arriving at various towns and villages and posting the Ukrainian flag, according to Abdel-Hamid.

The Kremlin last week formally annexed the region along with three others even though Russian troops do not fully control it.

If Ukraine manages to take Kherson, it will be a “huge loss for the Russians because that region is needed to protect the Crimean Peninsula that Russia annexed back in 2014,” Abdel-Hamid said.

“It also takes away from Russia a land access to that peninsula,” she added.

Tuesday’s territorial losses would not be the first time that Moscow had acknowledged a withdrawal so obliquely.

On September 11, a map presented by the defence ministry showed that Russian forces had abandoned most of the parts of Kharkiv that they had controlled, as far east as the Oskil, after the lightning Ukrainian offensive.