Kyiv, Ukraine – The Russian general who lost a strategic town in eastern Ukraine should spill his blood on the front line to “wash away his shame”.

That’s what Ramzan Kadyrov, Chechnya’s leader and one of Russian President Vladimir Putin’s key allies, said of Alexander Lapin, the Russian colonel general who led the defence of Lyman in the Donetsk region and ordered a retreat last weekend.

Before he pulled back his troops, Lapin moved his headquarters to the separatist stronghold of Luhansk, 160km (100 miles) away from Lyman, Kadyrov said.

The Chechen leader accused Lapin of then failing to secure a supply of ammunition and communication equipment and said he did not coordinate his forces on the ground.

“Had it been up to me, I would have demoted Lapin to a trooper, took away his decorations and sent him to the front line with an assault rifle in his hands to wash away his shame with his blood,” Kadyrov wrote on Telegram on Saturday.

The Russian defence ministry said it had withdrawn its forces from Lyman to “better ground”.

The flight from Lyman reported by the Ukrainian military looked especially humiliating because it followed Putin’s announcement on Friday of the annexation of four Ukrainian regions – including Donetsk.

To Ukrainian observers, the Lyman defeat embodies the inherent faults of Russia’s entire military system, which still wages wars according to Soviet-era strategies.

“The times have changed, but the Russian army hasn’t, and that’s it,” said Ihar Tyshkevich, a Kyiv-based analyst. “When you are trying to use military instructions written in the 1970s, sooner or later happens what happened in the Kharkiv region and near Lyman.”

Lyman’s liberation could pave the way for Ukraine’s takeover of the oldest hotbeds of pro-Russian separatism in Donetsk and Luhansk, known collectively as the Donbas.

Ukraine seized a highway that served as the shortest supply line for all of Russian forces in Donetsk and Luhansk, a military analyst said.

According to Nikolay Mitrokhin, a Russia specialist at Germany’s Bremen University, the Ukrainians can now move east to liberate northern Luhansk and level out the successes of Russia’s advance there a few months ago.

They can “get the front line to the borders of Donbas before February 2022,” when the war began, he told Al Jazeera.

Meanwhile, something long unheard of is happening in Russia – a litany of complaints.

One of the critics is Yegveny Prigozhin, an oligarch known as “Putin’s chief”. He founded the Wagner mercenary group and personally toured dozens of Russian prisons to recruit thousands of inmates.

In a rare public comment, he praised how Kadyrov scorned Lapin.

“Kadyrov’s expressive statement is not my style, of course, but I can say, ‘Ramzan, you handsome devil, go on,'” he reportedly said.

A southern Siberian lawmaker said that local authorities “lost” 1.5 million uniforms and that newly mobilised civilians will have nothing to wear in winter.

“Everything was there and then just evaporated,” Andrey Gurulev from the Zabaikalsky region said on Telegram. “Nobody can explain it anywhere or anyhow.”

A former army general who fought during the Second Chechen War, Gurulev said that Russian forces should revert to total defence, “dig themselves in the ground” before the newly mobilised forces arrive at the front line in at least two months. 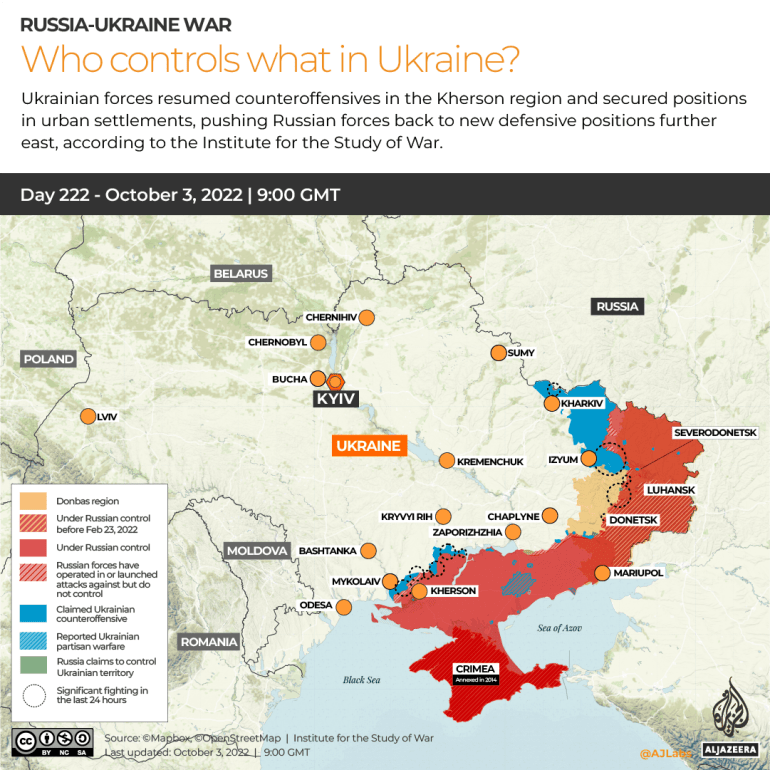 Russian war correspondent Alexander Kots compared the current situation with the February 1917 revolution that toppled Tsar Nicholas II and paved the way for the Communist takeover.

The Russian Empire lost “a war of nerves” because “in the rear, there were hesitations, depression, a search for domestic enemies,” the Komsomolskaya Pravda reporter wrote on Telegram on Monday.

Observers agree with him.

The mood among Russian soldiers resembles the panic that followed Russia’s losses during World War I, Bremen University’s Mitrokhin said.

“Disappointment in top brass, direct accusations of treason, verbal attacks on commanders – this is stage one,” he said.

“What’s next is disappointment in the commander-in-chief, who can’t improve anything,” he said. “The third stage is revolutionary with the already-lost war in the background.”

Anti-Putin statements ‘not far away’

An exiled opposition leader thinks the squall of criticism will soon be directed at Putin.

“We have long waited for the infighting to begin, and it has,” Gennady Gudkov told Al Jazeera.

“There are no anti-Putin statements yet, but they are not far away,” said the lawmaker expelled from the State Duma, Russia’s lower house of parliament, for his criticism of Putin’s policies. “The first stones are thrown, but not at Putin, only at his coterie.”

He predicted purges of some of the generals fighting in Ukraine.

“So far, it’s the Kadyrovs, Prigozhins who voice the blame, but soon, they will have to say who will be ‘appointed’ a scapegoat,” Gudkov said.

He compared the situation to the disastrous Russo-Japanese War of 1905 when the tsar’s armies suffered a devastating defeat.

“Japan was seen as a weak rival, a weak enemy,” Gudkov said. “The war was needed to return the public trust, approval ratings, the empire’s waning greatness.”

“We know what it all ended with,” Gudkov concluded.