Kyiv, Ukraine – Halyna Tarasevych is not coming back home to Kyiv.

The 38-year-old fled Ukraine with her two children in March, weeks after the Russian invasion began.

They spent three months in an overcrowded refugee centre in neighbouring Moldova until Switzerland granted them asylum.

The children, 12-year-old Olena and seven-year-old Mykola, recently started school. They are surrounded by caring teachers and classmates who help them adapt to a German-language education.

“They like it here. We’ve seen so much kindness,” Tarasevych, who has an art history degree, told Al Jazeera.

Back in the Ukrainian capital, she had helped her husband Oleh run a stationery shop. 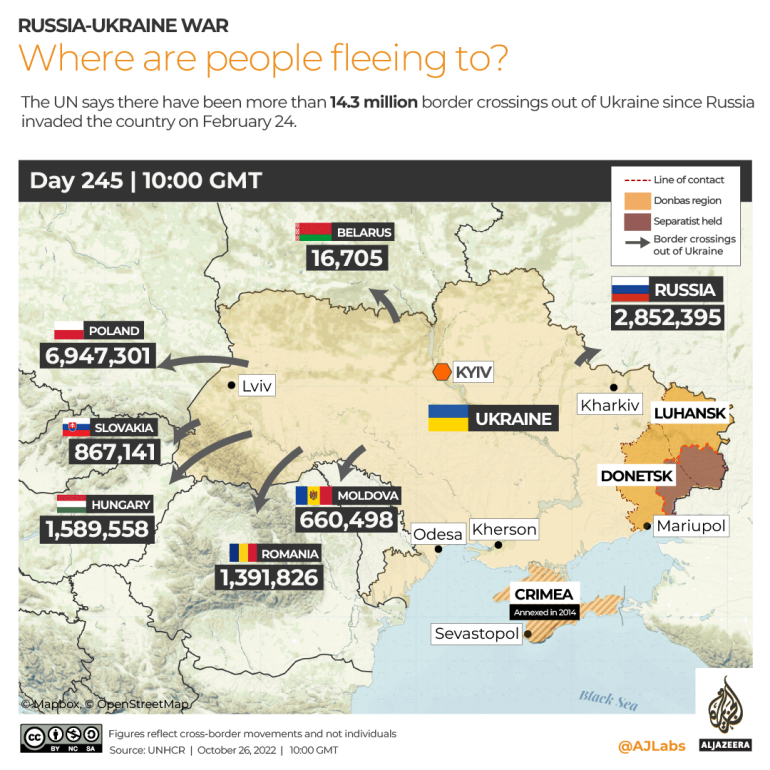 Oleh still works in the shop but will join his family as soon as Ukraine starts letting men aged between 18 and 60 out of the country.

Unlike millions of other Ukrainians uprooted by the war, the Tarasevyches have not lost their comfortable three-bedroom apartment or jobs. Thankfully, none of their relatives or friends have been killed in the conflict.

But they are committed to a new life in Switzerland.

“There’s no future in Ukraine,” Oleh told Al Jazeera, citing corruption and the economic free-fall that may shrink Ukraine’s gross domestic product (GDP) by a third this year.

His shop was not particularly profitable before the war and switching to another business was risky, he said.

He remembers basic, rudimentary German from his school days and is ready to spend the rest of his life working low-paying, menial jobs in Switzerland for the sake of his children’s future.

“All the best – to the children,” he said citing a Soviet-era slogan.

The emigration of the Tarasevych family is indicative of Ukraine’s dire demographic crisis, which began decades before the war.

At the dawn of independence in 1991, Ukraine’s population stood at 52 million.

The current official figure is 43 million, but the statistics are widely understood to be far from true.

The last census took place in 2001 and the current figures include more than 2 million in annexed Crimea, as well as several million in two separatist statelets – the Donetsk and Luhansk “people’s republics” in the southeast.

Before the war, at least 8 million Ukrainians worked in Europe full or part-time, thanks to the visa-free policy. It had also been relatively easy to obtain a work visa.

Many worked as seasonal farmhands, drivers, construction workers or cashiers and came home only for Easter or Christmas.

With each paycheque, they would set aside enough money for a new house or apartment in their hometown or village.

In nations such as Poland, where millions of young Poles moved westward, becoming the proverbial “Polish plumbers”, Ukrainians saw an opportunity in the shortage of blue-collar jobs.

And some young Ukrainians, familiar with life in the European Union, are now determined to build careers in the bloc.

“He visited Germany at 16 and told me right away: ‘I’m learning German and going to a university there’,” Kyiv resident Kateryna Mikhaylenko said of her 19-year-old son Aleksander.

These days, Aleksander studies civil engineering at Hamburg University. He has a Montenegrin girlfriend and a part-time job at a bowling alley.

He calls his parents at least once a day.

“Thank God for WhatsApp,” said his father Mikhaylenko, who earns less than $20 a day working at a grocery store.

The war in Ukraine has fuelled the largest European refugee crisis since World War II.

According to the United Nations, 7.7 million refugees from Ukraine have been registered across Europe since the war began, with most arriving in Poland.

But Ukraine’s irreversible demographic decline began in the Soviet era and stems from the catastrophic loss of population during World War II as well as rapid urbanisation.

“The return of refugees en masse is correlated to the war situation and, in the long term, to the strategy of economic development,” Aleksey Kushch, a Kyiv-based analyst, told Al Jazeera.

Ukraine needs a repatriation programme, but this is unfeasible without a booming economy, he said.

The boom is only possible if the entire economic model is reconsidered because Ukraine’s financial elites are too used to living off grain and steel exports, he said.

“Otherwise, a demographic crisis awaits Ukraine – a population of less than 30 million, 10 million of whom are retired,” Kushch concluded.

However, another observer said the shortage of working-age people could prove economically beneficial.

“Wages will be up for those who stay thanks to the deficit at the job market,” Nikolay Mitrokhin, a researcher at Germany’s Bremen University, told Al Jazeera.

Still somewhat “archaic”, the economy will have to be modernised, especially in the agriculture sector, where the shortage of farmhands is still high, he added.

No home to return to

A Russian bomb hit Maksim Kolesnikov’s apartment building on March 26, a week after he, his mother, wife and daughter had left the besieged southern city of Mariupol.

These days, Mariupol is under Russian occupation and Kolesnikov does not know for how long.

His family have settled in a tiny Polish village outside Krakow.

They live in one room and are mostly “bored and squabbling all day”, he said.

“But boredom is better than death,” the 49-year-old lawyer, who moonlights as a cabbie in Kyiv, told Al Jazeera.

He is ready to join them as soon as the borders open because restarting life from scratch in Kyiv is not an option.

Lawyers in the capital are very territorial and finding a good job without connections is nearly impossible, he said.

“I’ll never be able to earn enough for a new apartment,” he said with calm desperation.