UK Prime Minister Rishi Sunak has faced the opposition in the House of Commons for the first time since taking office, seeking to provide assurances that his new government will offer economic stability and continuity after his predecessor’s tax-cutting plans triggered market turmoil.

Sunak, who entered 10 Downing Street on Tuesday, has appointed a government that mixes allies with experienced ministers from the administrations of his two immediate predecessors, Boris Johnson and Liz Truss, as he tries to tackle Britain’s multiple economic problems.

One of his government’s first acts was to delay a key economic statement until November 17, saying it would deliver more accurate forecasts as the government seeks to tackle the cost-of-living crisis.

“We will have to take difficult decisions to restore economic stability and confidence,” Sunak told lawmakers during his first Prime Minister’s Questions (PMQs) session. “We will do this in a fair way. … I will always protect the most vulnerable. … We did that in COVID, and we will do that again.”

Opposition politicians focused on the baggage his new government carries: ministers from the cabinets of Johnson, who quit in July after a slew of ethics scandals, and Truss, whose government lasted just seven weeks.

A package of unfunded tax cuts that Truss unveiled last month spooked financial markets with the prospect of ballooning debt, drove the pound to record lows and forced the Bank of England to intervene, weakening Britain’s fragile economy and obliterating Truss’s authority within the Conservative Party.

Sunak is seen by Conservatives as a safe pair of hands who they hope can stabilise an economy sliding towards recession. They also hope he can stem the party’s plunging popularity.

Sunak brought in people from different wings of the Conservative Party for his cabinet. He removed about a dozen members of Truss’s government but kept several senior figures in place, including Foreign Secretary James Cleverly and Defence Secretary Ben Wallace.

He faced a backlash for reappointing Home Secretary Suella Braverman, who resigned last week after breaching ethics rules by sending a sensitive government email from a private account. She used her resignation letter to criticise Truss, hastening the then-prime minister’s departure. 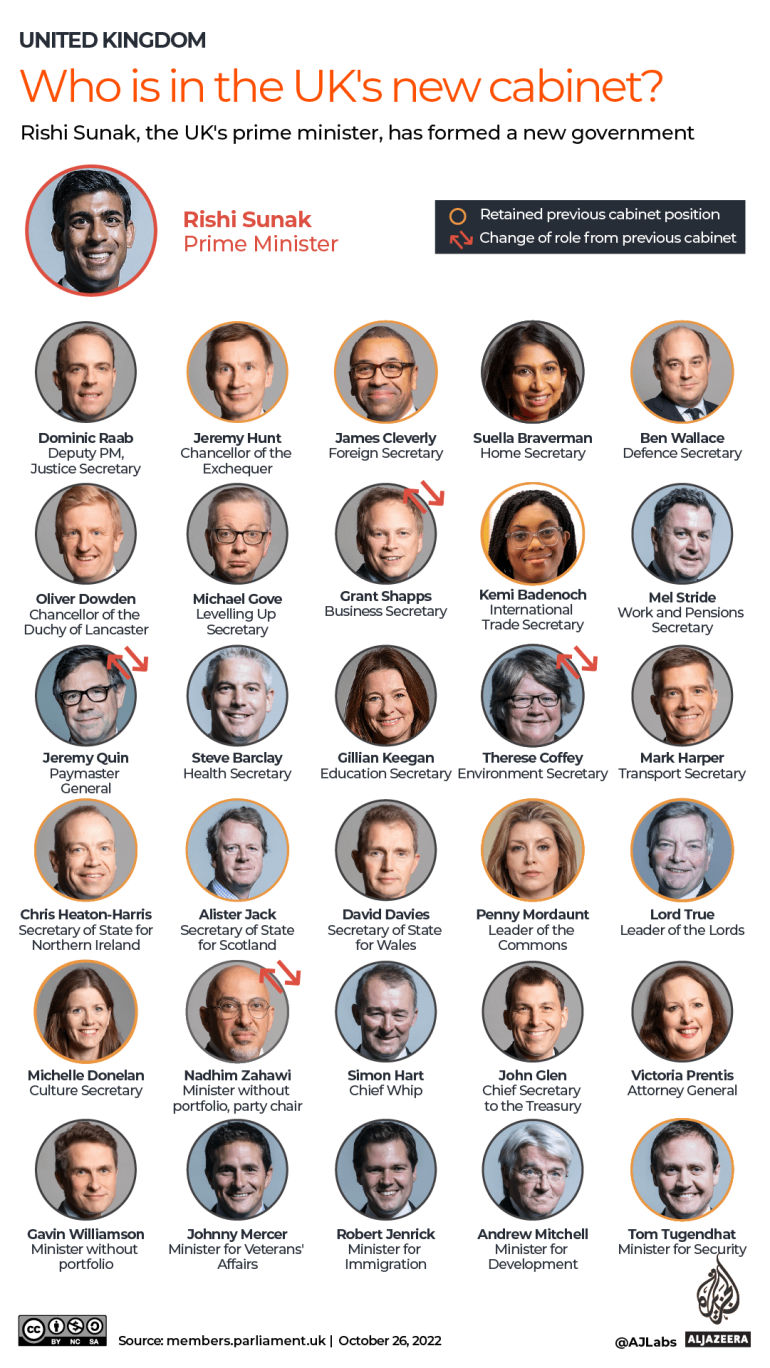 Braverman is a leading light of the Conservatives’ right wing who infuriates liberals. She is tasked with fulfilling a controversial, stalled plan to send some asylum-seekers arriving in Britain to Rwanda.

Sunak denied an allegation by Labour leader Keir Starmer that he had made a “grubby deal” with Braverman in return for her support in the leadership contest.

Opponents expressed astonishment that Braverman could be back in her job less than a week after her resignation and before an investigation of her ethics breach.

Al Jazeera’s Andrew Simmons, reporting from London, described Starmer as “very confident in his questioning” and “firm” while Sunak was fluent and authoritative “but he was really fighting a rearguard action towards the end”.

“It has to be said also that Sunak for his first outing for a PMQs, … he did lose out quite considerably, but then he did defend his home secretary, saying that she actually apologised and offered her resignation when she realised she had a mistake over that email,” he said.

“So the substantive issues haven’t really been fully addressed in this exchange,” he added. “It has been more of a fist fight on who can have the higher moral ground and indeed a higher political ground.”

Sunak also kept in place Treasury chief Jeremy Hunt, whom Truss appointed two weeks ago to steady the markets. His removal likely would have set off new tremors.

Hunt, who had planned to deliver a statement on October 31 about how the government will manage a budget shortfall, will now have a few more weeks to outline plans to fill the 40-billion-pound ($45.88bn) fiscal hole created by soaring inflation and a sluggish economy – and exacerbated by Truss’s tax plans.

British government bonds extended their losses on confirmation of the budget plan delay. Long-dated gilt yields hit new session highs as they rose 12 to 13 basis points on the day. Sterling was little changed by the announcement.

The delay will complicate the Bank of England’s job next week when it is due to publish forecasts for the economy without knowing the details of the government’s fiscal plans. It will also take its latest monetary policy decision.

The central bank is expected to raise its benchmark interest rate again on November 3, probably from 2.25 percent to 3 percent.