At least 13 people, including three children, have been killed after a supersonic fighter jet crashed into a residential building in the southern Russian city of Yeysk, near the border with Ukraine, creating an inferno.

Footage on social media showed a large fireball erupting from the nine-storey building on Monday, and as rescue efforts ended, the  Interfax news agency said 13 bodies had been pulled from the ruins.

“Rescuers have finished excavating the rubble (…) In total, 13 people died, including three children, while 19 people were injured,” according to the ministry of emergency situations, quoted by Russian agencies.

The crew of the Sukhoi Su-34 managed to eject before the plane crashed, according to the defence ministry.

“While climbing to perform a training flight from the military airfield of the southern military district, a Su-34 aircraft crashed,” a ministry statement said. “The cause of the crash of the aircraft was a fire in one of the engines during takeoff.”

Oksana, a resident who declined to give her last name, said the area had been cordoned off.

“There could be an explosion. Everything is burning inside. There is smoke,” she told the AFP news agency.

She said she was stuck in traffic when she heard the news.

“I’m in shock obviously. My child was alone at home. We already used to go to sleep with fear every day — Mariupol is just across from us,” she said, referring to the nearby Ukrainian port besieged earlier this year by Russian forces, and now occupied by Moscow.

Firefighters battled the blaze as loud bangs from the apparent detonation of the warplane’s weapons were heard.

Russia’s Interfax news agency quoted emergency services as saying five floors of the apartment building were on fire, the upper floors had collapsed, and about 45 flats had been damaged.

About 600 people usually live in the building, the local Krasnodar administration said on Telegram. “The governor ordered the whereabouts of each resident to be established,” it said.

The Kremlin said President Vladimir Putin was immediately informed about the crash, and he ordered ministers of health and emergency services along with the local governor to head to the site.

Hours after the crash, Governor Veniamin Kondratyev said emergency services managed to contain the fire. “Information about the dead and injured is being clarified. Ambulance crews are on the scene,” he said.

Officials say at least 4 people were killed after a Russian fighter plane crashed into a residential building in the city of Yeysk, near Russian-occupied territories in Ukraine.

Russia’s Investigative Committee, which deals with serious crimes, later announced it launched a criminal probe into the crash. “Military investigators are establishing the circumstances and causes of the incident,” it said.

Yeysk is located on the Tangarog Gulf in the Sea of Azov, which separates southern Ukraine and southern Russia.

The Su-34 is a supersonic twin-engine bomber equipped with sophisticated sensors and weapons that is a key component of the Russian air force, and has been widely deployed in the war in Syria and Russia’s invasion of the Ukraine.

Monday’s incident marked the 10th reported non-combat crash of a Russian warplane since Moscow sent its troops into Ukraine on February 24. 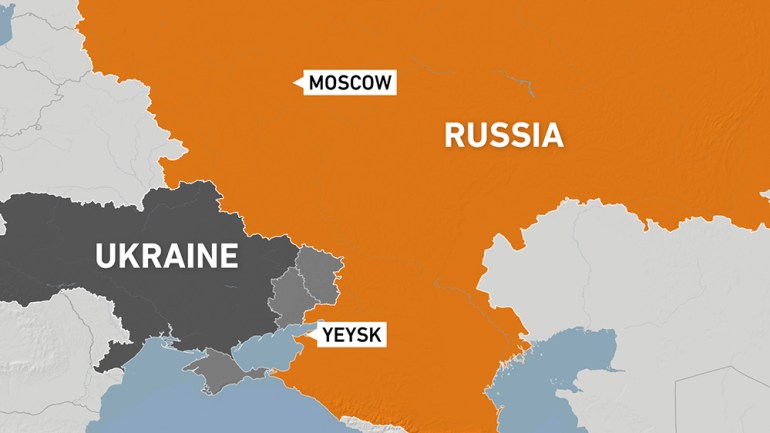