Lebanese President Michel Aoun has announced his country’s acceptance of the US-brokered maritime border deal with Israel, saying talks had come to “a positive end”.

The deal represents a “historic achievement” in which Lebanon regains 860sq km (332sq miles) of disputed maritime territory in the Mediterranean Sea that is home to offshore gasfields, Aoun said on Thursday.

However, he insisted it did not pave the way for the normalisation of relations with Israel.

The agreement to establish the maritime border followed months of talks mediated by senior US official Amos Hochstein. It represents a major breakthrough in relations between the two countries, which have formally been at war since Israel’s creation in 1948.

“This indirect agreement responds to Lebanese demands and maintains all our rights,” Aoun said in a televised speech.

Aoun made the announcement hours after meeting with caretaker Prime Minister Najib Mikati and Speaker Nabih Berri, who received copies of Hochstein’s latest iteration of the agreement this week.

US President Joe Biden on Tuesday said both countries agreed to “formally” end their maritime border dispute and their leaders told him they were ready to take the next steps.

Israel’s cabinet on Wednesday voted in favour of the US-brokered deal by a “large majority” The agreement will be forwarded to the Knesset, or parliament, for a two-week review before a final cabinet vote. 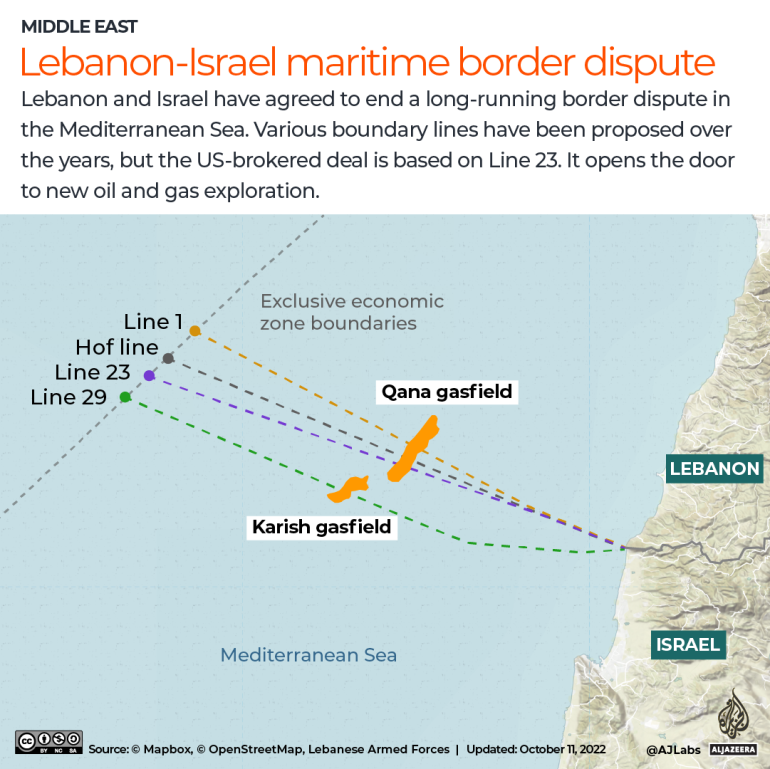 Lebanon hopes demarcating the border will pave the way for gas exploration and will help lift it out of its crippling economic crisis.

“I hope the end of these negotiations is the promising start to placing the cornerstone for the economic growth that Lebanon needs through extracting oil and gas, which would add stability, security and development that our nation Lebanon needs,” Aoun said.

Israel, meanwhile, also plans to exploit the gas reserves and hopes the deal will reduce the risk of war with Hezbollah, a Lebanese political party backed by Iran.

The agreement stipulates the disputed waters will be divided along a line straddling the Qana natural gasfield. Gas production would be based on the Lebanese side, but Israel would be compensated for gas extracted from its side of the line.

Lebanon has been working with French energy giant Total on preparations for exploring the field.