Russian President Vladimir Putin has hailed his country’s ties with the United Arab Emirates (UAE) during a meeting with the Gulf state’s leader, and welcomed a recent decision by oil-producing nations to limit production as key to stabilising the global energy market.

Speaking on Tuesday at the start of his talks in Saint Petersburg with UAE President Sheikh Mohammed bin Zayed Al Nahyan (MBZ), Putin described relations between the two countries as “an important factor of stability” in the region and the world “despite all the difficulties that exist in the international relations today”.

The Russian leader noted MBZ’s support for the decision last week of the OPEC+ group that includes Russia to slash oil production by two million barrels a day, despite pressure by the United States and other countries.

“Our decisions … aren’t directed against anyone,” Putin said.

“Our actions are aimed at ensuring stability in global energy markets to make both consumers of energy resources and those who deal with production and supplies feel calm, stability and confidence, to help balance supply and demand.” 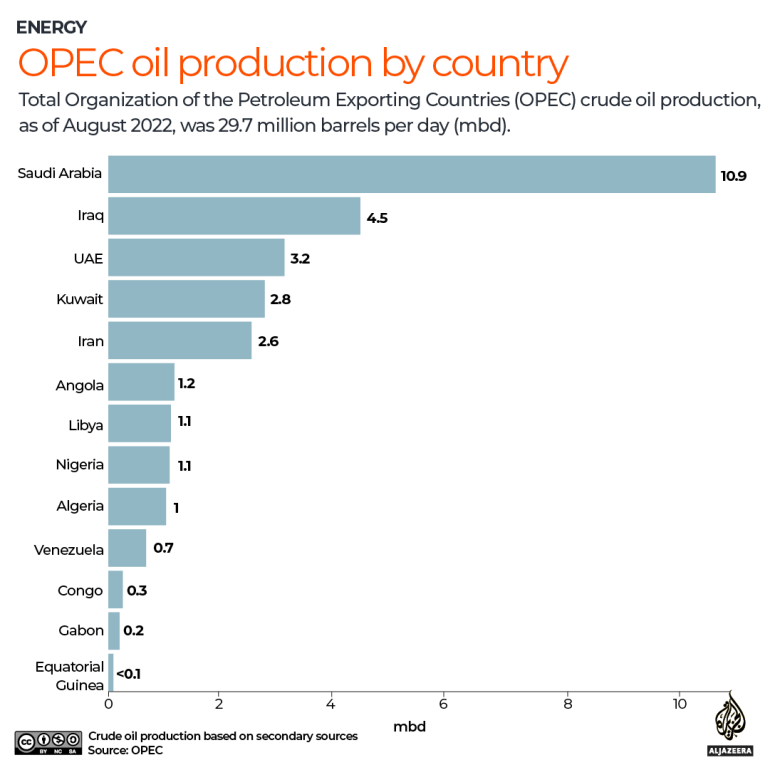 The decision by OPEC+ to slash production in order to shore up prices has angered Western countries, where many saw it as a move that would help Putin finance Russia’s military efforts in Ukraine. The production cut also risked saddling US President Joe Biden and Democrats with rising petrol prices just before the critical midterm US elections.

The UAE has maintained close business ties with Russia and sought to refrain from joining the sanctions imposed by the US and other Western allies in response to Moscow’s invasion of Ukraine.

Meanwhile, UAE state news agency WAM said that MBZ, during his meeting with Putin, “affirmed” his country’s aim to contribute to “strengthening the foundations of global peace and stability”, as well as to “reduce tensions and find diplomatic solutions to crises” in situations such as the war in Ukraine.

The two leaders “reviewed a number of regional and international issues and developments of common concern”, WAM said.

This was reiterated in a Twitter post, where the UAE leader said about his meeting with Putin: “We discussed several issues of mutual concern, including the Ukraine crisis, and the importance of engaging in dialogue to reduce tensions and arrive at a diplomatic solution.”

For his part, Putin hailed MBZ for mediation efforts that helped solve some “really sensitive humanitarian issues” in Ukraine.

“I’m aware of your concern about the development of the situation and your desire to contribute to the settlement of all disputed issues, including today’s crisis in Ukraine,” Putin said.