Dozens of people, including citizens and police officers, have been killed as protests continue to rage in Kazakhstan, the worst street unrest since the country gained independence 30 years ago.

Thousands have reportedly been arrested in Almaty and of the hundreds injured, at least 60 are in intensive care.

The protests began over the weekend, triggered by rising fuel prices, but have since morphed into anti-government riots, feeding off resentment of more than three decades of rule by ex-President Nursultan Nazarbayev.

He also invited troops from a Russian-headed military alliance of former Soviet states into Kazakhstan to restore order.

This live blog is now closed. Here are the updates for January 6:

The United States is closely monitoring reports that peacekeeping forces of the Russia-led Collective Security Treaty Organization have been deployed to Kazakhstan, State Department spokesman Ned Price has said.

“The United States and, frankly, the world will be watching for any violation of human rights,” Price told reporters.

“We will also be watching for any actions that may lay the predicate for the seizure of Kazakh institutions.”

Turkish Airlines has suspended all passenger service between Turkey and Kazakhstan through Sunday, the flag carrier announced.

The decision was made in light of protests that have rocked the country, the airline said.

The peacekeeping forces of the Collective Security Treaty Organisation (CSTO) sent to Kazakhstan will total about 2,500 personnel, the RIA news agency has reported citing the secretariat of the Russia-led security bloc.

These peacekeeping forces will stay in Kazakhstan for several days or weeks, RIA reported, citing the secretariat.

The peacekeepers have the right to use weapons in Kazakhstan in case they are attacked by “armed gangs”, it added.

Unrest in Kazakhstan will not affect plans for NATO’s talks with Russia next week over Ukraine, White House press secretary Jen Psaki has told reporters.

The US and its European allies are to hold three sets of talks involving the Russians next week starting with a meeting in Geneva.

World’s biggest uranium miner says it is unaffected by turmoil

Kazatomprom, the world’s biggest uranium producer, has said it was operating normally with no effect on output or exports despite the unrest.

Uranium prices have risen after turmoil began in Kazakhstan. Spot prices hit $45.50 per pound on Wednesday, the highest since November 30, according to a Platts assessment.

“Uranium mining is going according to plan. There have been no stoppages. The company is fulfilling its export contracts,” a Kazatomprom spokesperson said.

UK says it is concerned by clashes

The United Kingdom has said it is concerned by the violent clashes, saying protests should be peaceful and the law enforcement response proportionate.

“We call for calm and we condemn acts of violence and the destruction of property and buildings,” the British Foreign Office said in a statement.

“We also call for a resumption of internet services and for the Kazakh authorities to respect their commitments to freedom of speech and expression.”

They also cited the ministry as saying that 2,298 people have so far been detained.

Security forces in Kazakhstan have cleared Almaty’s central square, a key rallying point for protesters and where gunfire had been heard throughout the day, media reports have said.

In a phone call with his Kazakh counterpart, the Turkish president has expressed solidarity with Kazakhstan.

Recep Tayyip Erdogan told his Kazakh counterpart Kassym-Jomart Tokayev that Turkey is closely following the unfolding situation and stands in solidarity with the country, said a statement by Turkey’s communications directorate.

“In a phone call to Tokayev, our president expressed his wish for a new government to be established in Kazakhstan as soon as possible to end the country’s tension,” it added.

Oil production at Kazakhstan’s top field Tengiz has been reduced, its operator Chevron has said, as some contractors have disrupted train lines in support of protests.

Kazakhstan is a major oil producer with an output of about 1.6 million barrels per day (bpd) in recent months, and has rarely seen production disrupted by unrest or natural disaster.

“TCO production operations continue, however, there has been a temporary adjustment to output due to logistics,” Chevron, the largest foreign oil producer in Kazakhstan with a 50 percent stake in the Tengizchevroil (TCO) joint venture, said in a statement.

UN rights chief Michelle Bachelet has urged all sides in Kazakhstan to refrain from violence and to seek a peaceful resolution to their grievances.

Borrell expressed “great concern” about the situation and added: “Rights and security of civilians must be guaranteed … EU is ready to support in addressing this crisis.”

US Secretary of State Antony Blinken has spoken with Kazakh Foreign Minister Mukhtar Tileuberdi regarding the ongoing state of emergency in Kazakhstan, the US State Department has said.

“The Secretary reiterated the United States’ full support for Kazakhstan’s constitutional institutions and media freedom and advocated for a peaceful, rights-respecting resolution to the crisis”, the State Department said.

The continuing unrest in Kazakhstan has attracted the attention of the wider region, including neighbouring Russia and China, as well as Western powers.

For a review of the international reaction to the crisis to date, click here.

The troops arrived as part of a “peacekeeping force” deployed to Russia’s neighbour and ally by the CSTO at the request of Tokayev, who has accused foreign-trained “terrorist gangs” of driving the unrest.

Military units from fellow CSTO member states Armenia, Belarus, Tajikistan and Kyrgyzstan were also being sent, the secretariat said. However, the organisation, of which Kazakhstan is also a member, did not disclose the overall size of the force being deployed.

The price of Uranium has rocketed, given Kazakhstan is the world’s largest producer of the radioactive metal.

The country is also the world’s second-largest miner of Bitcoin after the United States. Bitcoin’s “hashrate” – the measure of the computing power of machines plugged into its network – dropped by more than 10 percent on Wednesday after Kazakhstan’s internet was shut off, according to cryptocurrency mining firm BTC.com.

Kazakhstan’s foreign ministry has denied a media report that the entry of foreigners into the country had been suspended, the Sputnik news agency quoted the government department as saying.

The rebuttal came after Russia’s state-run RIA Novosti news agency on Thursday quoted the Kazakh embassy in Uzbekistan as saying that Kazakhstan had temporarily suspended entry for foreigners amid the widespread protests.

People wounded in shooting at main square in Almaty

Witnesses cited by Tass, the Russian news agency, say people have been wounded by shooting in the main square in Almaty. 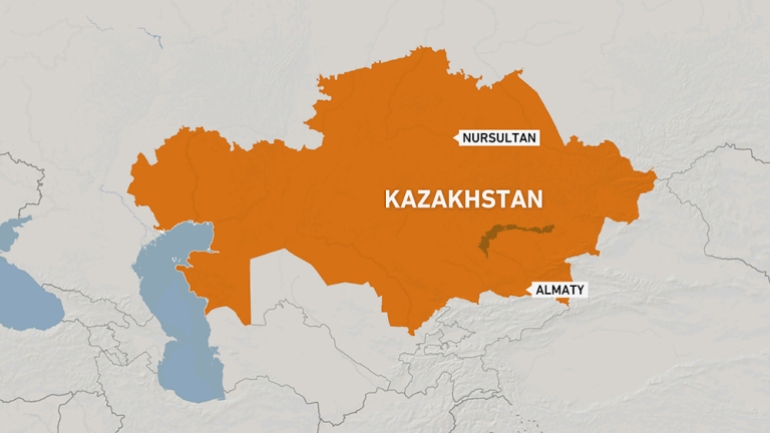 According to Kazakhstan’s Ministry of Healthcare, more than 1,000 people have been injured since the protests began, with 400 taken to hospital. Of these, 62 had to be treated in intensive care units.

Thousands arrested in a matter of days

About 2,000 people have been arrested so far in the anti-government protests rocking Almaty and more yet are being taken into custody, local media reports, citing Kazakh authorities.

It was unclear how many have been detained across Kazakhstan.

An explosion and gunfire are heard near Almaty’s main square, Reuters correspondents report from the scene.

Military vehicles were also seen moving towards the square, according to Reuters witnesses.

How the Kazakhstan crisis may have a ripple effect

Read our analysis on where Russia stands on the crisis and why leaders in other Central Asian nations are keeping a close eye on developments.

Kazakh firm Kazatomprom, the world’s biggest uranium producer, says it is operating normally with no effect on output or exports.

“Uranium mining is going according to plan there have been no stoppages. The company is fulfilling its export contracts,” a Kazatomprom spokesperson said.

Uranium prices have soared in recent days amid the unrest in Kazakhstan.

The EU says Russia must respect Kazakhstan’s sovereignty and independence as Moscow deploys paratroopers to the former Soviet republic.

The European Commission, the EU’s executive arm, also urged restraint on all sides.

“The violence must be stopped. We are also calling for restraint from all parties and a peaceful resolution of the situation. Now obviously, the EU is ready and willing to support a dialogue in the country,” an EU spokesperson said.

Russia says it will consult with neighbouring Kazakhstan and other allies on possible further moves to support a “counter-terrorist” operation there and unblock critical infrastructure.

“We regard the recent events in a friendly country as an attempt, inspired from the outside, to undermine the security and integrity of the state by force, using trained and organised armed formations,” the Russian foreign ministry said in a statement.

Russia has already sent troops to Kazakhstan as part of a peacekeeping force deployed by the Moscow-headed CSTO military alliance.

Russia’s TASS news agency quotes the Kazakh health ministry as saying that more than 1,000 people have been injured since the protests started, and more than 400 of them are in hospital.

The Caspian Pipeline Consortium, a group that runs Kazakhstan’s main crude oil blend to export terminals, says it is continuing to operate normally.

CPC is owned by a consortium that includes Russia’s Transneft, Kazakh KazMunayGas, Chevron Caspian Pipeline Consortium Company and LUKARCO BV among other firms.

CPC’s facilities in Kazakhstan are based in the province of Atyrau.

‘Authorities have hit back hard’

Al Jazeera’s Robin Forestier-Walker, reporting from Georgia, says internet restrictions in Kazakhstan make it difficult to determine exactly what is taking place on the ground.

“We are also aware of gunfire on the streets and I have seen video, unconfirmed, of morgues full of bodies of young men, [who were] presumably protesters … and the government are also saying that they have suffered casualties … so, unfortunately, it’s looking like a bloodbath is taking place in Kazakhstan at the moment.”

Police spokeswoman Saltanat Azirbek says that demonstrators attempted to storm government buildings overnight in the country’s largest city, Almaty, and that “dozens of attackers were liquidated”.

Meanwhile, state television reported that 13 members of Kazakhstan’s security forces had died, including two who had been decapitated.

A military alliance of former Soviet states says it has sent paratroopers into Kazakhstan as part of an international peacekeeping force to quell the unrest.

Tokayev had appealed for the CSTO – which counts Russia, Armenia, Belarus, Kazakhstan, Kyrgyzstan, and Tajikistan as its members – to intervene.

“Peacekeeping forces of the Collective Security Treaty Organisation were sent to the Republic of Kazakhstan for a limited time to stabilise and normalise the situation,” the CSTO secretariat said in a statement posted online by the Russian foreign ministry spokeswoman Maria Zakharova.

Explainer: What is behind the protests rocking Kazakhstan?

The chaos in tightly controlled Kazakhstan, a former Soviet republic, was triggered by a sudden spike in the price of car fuel at the start of the year.

But the roots of the mass discontent run much deeper, with protesters venting fury over the entire political system.

For an in-depth explainer on what’s really driving the demonstrations, click here.

A FlyDubai spokesperson said the airline had cancelled its two return Dubai-Almaty services scheduled for Thursday due to the “situation on the ground”, with the route suspended until at least January 8. A return FlyDubai flight from Dubai to Kazakhstan’s capital, Nursultan, was due to operate, however.

The website for Air Arabia showed its return Sharjah-Almaty flights scheduled for Thursday as cancelled.