Washington, DC – A year after Donald Trump urged thousands of his supporters to “fight like hell” just hours before the US Capitol building was overrun on January 6, 2021, authorities in the United States are still prosecuting accused rioters.

More than 700 people have been arrested over the incident, which Democrats often describe as an insurrection that aimed to violently prevent the certification of President Joe Biden’s election victory.

Trump was impeached by the US House of Representatives for “inciting” the riot. But last month the former president remained defiant, rejecting any criticism of his role in an attack that he said was a “completely unarmed protest of the rigged election”.

While Trump appears to have escaped legal repercussions for the Capitol riot so far, many of his supporters have not. 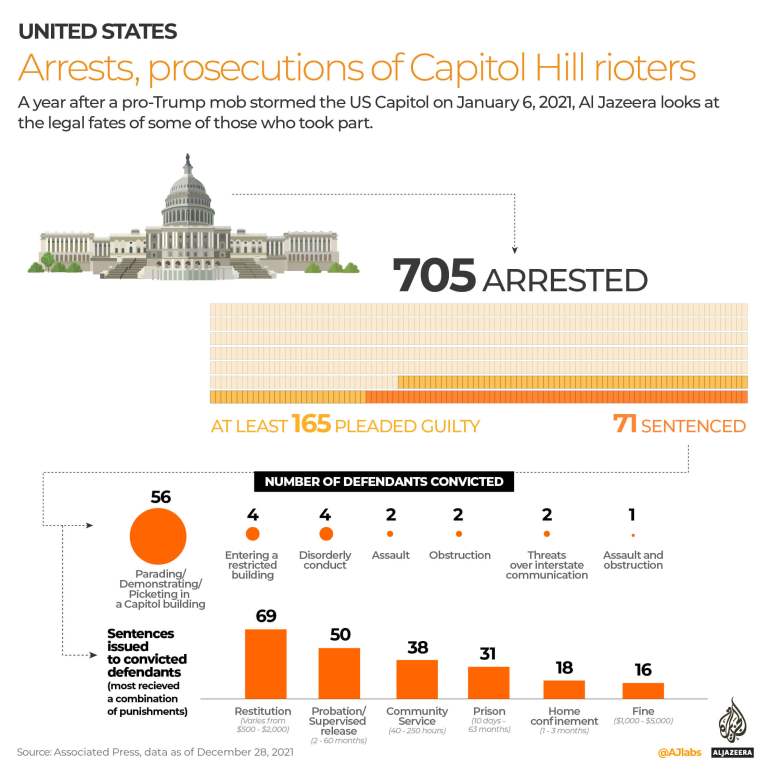 Federal authorities have levelled a myriad of charges against suspected rioters, ranging from entering a restricted building to more serious counts such as assaulting officers with dangerous weapons.

Here, Al Jazeera examines the legal cases involving some of the most memorable faces from January 6.

With a pointy beard, an American flag painted on his face, and horns sticking out of his fur hat, the shirtless and heavily tattooed, self-described “QAnon Shaman” rapidly rose to internet fame after the riot.

Images showing Jacob Chansley shouting while standing inside the Capitol building quickly became synonymous with the events that unfolded that day.

Chansley, who is from Phoenix, Arizona, was arrested on January 9 and initially faced a six-count indictment.

He was accused of scaling the Senate dais and “taking the seat that Vice President Mike Pence had occupied an hour earlier” when Congress was attempting to certify the election.

In February, he released a statement through his lawyer apologising for his actions during the riot and voicing disappointment with Trump for failing to pardon him and other January 6 suspects before leaving office.

“I am sorry for having aroused fear in the hearts of others. That was wrong. Period,” he wrote.

Chansley eventually pleaded guilty to obstruction of an official proceeding in a deal with the prosecution that saw the other charges dropped. He was sentenced on November to 41 months in jail.

His defence lawyer, citing Chansley’s “mental health infirmities” that were diagnosed in 2006 and 2021, painted his client as a vulnerable individual, accusing Trump of inciting the riot “by and through his actions and words”.

“Mr. Chansley is not a political prisoner. He does not seek to be labeled such. Rather, this case is about a frail and vulnerable human,” Konder Watkins, the lawyer, wrote in a court filing in November.

Holding a Confederate battle flag inside the US Capitol, Kevin Seefried, of Laurel, Delaware, instantly became one of the recognisable faces of the January 6 riot.

The flag was used by southern states that seceded from the US in 1861 to maintain slavery, sparking a bloody four-year civil war. It is seen as a symbol of hate and racism, but supporters of the flag say it represents southern heritage.

Seefried was taken into custody with his son Hunter on January 14. In April, a joint federal indictment against the pair was unsealed.

The older Seefried faces five counts relating to unlawfully entering the Capitol, the most serious of which – corruptly obstructing, influencing and impeding an official proceeding – carries a maximum jail sentence of 20 years. Hunter was charged with eight counts, including engaging “in an act of physical violence within the United States Capitol Grounds and any of the Capitol Buildings”.

“Defendant Kevin Seefried told law enforcement that he had traveled with his family from Delaware to the District of Columbia to hear President Trump speak, and that he and Hunter Seefried participated in a march from the White House to the Capitol led by an individual with a bull horn,” an affidavit by the FBI on the Seefrieds says.

Seefried, who has been free on bond, pleaded not guilty in May. In October, a federal judge in Washington, DC set his trial for June 2022, according to the Reuters news agency.

Nancy Pelosi, the speaker of the US House of Representatives, is the most powerful legislator in the US; she is third in the line of succession for the presidency, and virtually nothing gets a vote in the lower chamber of Congress without her approval.

On January 6, 2021, Trump supporter Richard Barnett, who goes by the name “Bigo”, was photographed with his feet on her desk in a picture that captured the chaos of the riot.

“I put a quarter on her desk even though she ain’t f*****g worth it,” he later said outside the Capitol in a viral video that has been cited in the legal case against him. “And I left her a note on her desk that says ‘Nancy, Bigo was here, you b***h’.”

In the video, Barnett also held up an envelope that he said he took from Pelosi’s office.

He was arrested two days after the riot and spent more than three months in pre-trial detention. Prosecutors, who had accused him of bringing a stun gun into the Capitol, argued that he posed a threat to the community.

“The defendant entered the office of Speaker Pelosi where he seems to have posed for photographs before taking her mail and allegedly leaving her a disturbing note – and telling the media about it,” they wrote in a court filing in January 2021.

“Then, the defendant acted swiftly to remove his numerous firearms and the stun device from his residence prior to his arrest, supporting the inference that he intends to retain control of them.”

A federal magistrate judge agreed with them in a January 28 ruling, saying that Barnett came to Washington, DC from his home in northwestern Arkansas on a “critical day under our constitution, prepared with a weapon and cloaked with entitlement”.

The defendant was released late in April after an appeals court ruled against pre-trial detention in a case similar to his.

Barnett faces seven federal charges, including entering and remaining in a restricted building or grounds with a deadly or dangerous weapon, which carries a maximum sentence of 10 years in jail if proven beyond a reasonable doubt. He has pleaded not guilty, and a date has not been set for his trial.

Since his release, Barnett has been outspoken in criticising the conditions of his imprisonment in the first half of 2021. “As far as apologies or regret … no comment,” Barnett told a local Arkansas news outlet in November. “You can pretty much guess how I feel, but I can’t comment on it.”

Aaron Mostofsky, who wore fur pelts inside the Capitol

Aaron Mostofsky’s outfit – brown fur pelts and a wooden staff – earned him the nickname “caveman” after his photos went viral during the riot.

But other accessories he carried – a body armour vest and a riot shield – may land him up to 10 years in jail, as federal prosecutors allege the items belonged to US Capitol Police and have charged him with theft of government property.

Mostofsky, the son of a prominent Brooklyn judge, was arrested on January 12, 2021. He faces eight federal counts, including obstructing official proceedings and assaulting, resisting or impeding an officer.

Mostofsky, who has been free on bond, pleaded not guilty in March, and his trial is scheduled for January 22, according to the US Justice Department.

On the day of the riot, Mostofsky told the New York Post that he felt cheated by the election results. “I don’t think 75 million people voted for Trump — I think it was close to 85 million. I think certain states that have been red for a long time turned blue and were stolen, like New York,” he said in an interview cited in an FBI affidavit.

Jennifer ‘Jenna’ Ryan, who posed next to broken Capitol window

Despite not facing more serious charges that could have carried years in jail, Jenna Ryan became one of the faces of the January 6 riot after posting a photo of herself posing with a peace sign next to a broken Capitol building window.

“We just stormed the Capital. It was one of the best days of my life,” Ryan wrote in a still undeleted tweet at 6:42pm local time on the day of the riot. She would later insist that she did nothing wrong, stressing that she will not go to jail in a social media post that invoked her “blonde hair” and “white skin”.

Late last month, Ryan reported to a federal detention facility in Texas to serve a 60-day jail sentence after pleading guilty to a charge of parading, demonstrating or picketing in the Capitol.

Ryan, a Texas realtor, flew by private jet to Washington, DC, to participate in a protest against the US election results, which took place before the riot.

Ryan’s lawyers have argued that she was inside the Capitol for two minutes, going no more than three metres (10 feet) inside the doorway. But prosecutors say she was aware of violence at the Capitol, illustrating the “nature and seriousness of the offense she joined”.

In the year following the riot, Ryan has repeatedly portrayed herself as a victim. “Just like they did that to the Jews in Germany. Those were scapegoats,” she told NBC News last month. “And I believe that people who are Caucasian are being turned into evil in front of the media.”

Last month, she said in a TikTok video that she will try to lose weight, work out, practise yoga and “detox” in prison. In a December 14 newsletter, she also shared tips on prison life that she said she acquired through research. “Keep your head down and do your time with no drama,” she wrote.