Clashes between Kurdish-led forces and ISIL (ISIS) fighters who assaulted a prison complex in northeast Syria are ongoing, despite prior announcements that the attack had been quelled.

Battles broke out anew on Saturday in the vicinity of the prison between the Syrian Democratic Forces (SDF) and members of ISIL who were hiding in the area, the Syrian Observatory for Human Rights said.

According to the UK-based war monitor, which relies on a network of sources inside Syria, four ISIL fighters took a local official and three civilians hostage for hours, holding them in a residential building near the prison. Kurdish forces later freed the hostages and killed three ISIL gunmen.

Assailants broke into the sprawling Ghwayran prison complex near the city of Hassakeh on January 20, sparking days of heavy fighting that killed 270 people.

The SDF announced that it had recaptured the prison on Wednesday, but “mop-up operations” continued. About 3,500 ISIL members surrendered, but others barricaded themselves inside the prison.

ISIL gunmen are in “cellars that are difficult to target with air strikes or infiltrate”, the Syrian Observatory said. SDF officials estimate between 60 and 90 ISIL fighters are still in the basement and the ground floor above it.

Twenty surrendered on Saturday, the Syrian Observatory said, adding that the SDF killed another five in an exchange of fire inside the prison.

Kurdish forces have repeatedly called for ISIL gunmen to surrender. “Our forces have not used force with them so far,” Farhad Shami, who heads the SDF’s media office, told the AFP news agency.

Shami said the bodies of the fighters would be buried in “remote, dedicated areas” under SDF control.

The violence prompted 45,000 people to flee Hassakeh, the UN said. Many took refuge in relatives’ homes, while hundreds more have slept in the city’s mosques and wedding halls.

Residents say recent high-profile ISIL operations only confirmed what they have known and feared for months.

“We would think it is over and they’re not coming back. Then suddenly, everything turns upside down again,” one Syrian man told The Associated Press on condition of anonymity, fearing for his safety.

They are “everywhere”, he said, adding that the fighters mostly operate at night in flash attacks on military posts or targetted killings carried out from speeding motorcycles.

“It is always hit-and-run,” he said. “Everyone is afraid of assassinations. They have prestige, they have a reputation. They will never go away.” 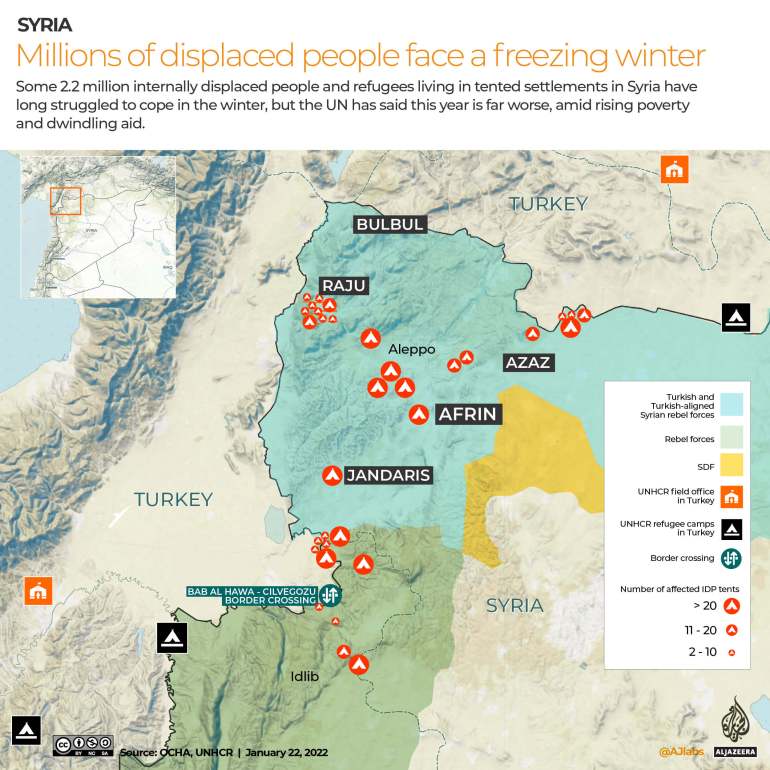 On its online channel, Aamaq, ISIL has put out videos from the prison attack while glorifying other operations in an intensified propaganda campaign. The aim is to recruit new members and “reactivate quasi-dormant networks throughout the region”, according to an analysis by the Soufan Group security consultancy.

Dareen Khalifa, a senior Syria analyst for the International Crisis Group, said the SDF’s dependence on an “unpredictable US presence” in fighting ISIL is one of its biggest challenges.

She said the SDF is viewed as “a lame duck” that makes local residents reluctant to cooperate with anti-ISIL raids or provide intelligence on cells after the group threatened or killed many suspected collaborators in the past.

Moreover, the Kurdish authorities’ claim to be able to govern and provide services to the region and its mixed population “has taken a blow in 2021 as the economic conditions in the area deteriorated”, Khalifa said.

The fighting also raised concerns among NGOs about the fate of some 700 children of ISIL fighters housed in the prison, who the SDF calls “Caliphate Cubs”.

The SDF has called on the UN to urge countries that have ISIL nationals detained in Syria to “accelerate the pace of their repatriation” – primarily children and women.

UN Under-Secretary-General Vladimir Voronkov told the Security Council on Thursday the deadly prison siege underscored the need to deal with those allegedly linked to the armed group in prisons and camps in Syria’s northeast.

ISIL lost its last patch of territory near Baghouz in eastern Syria in March 2019. Since that time, it largely went underground and waged a low-level battle, including roadside bombings, assassinations, and hit-and-run attacks mostly targeting security forces.

In eastern Syria, fighters carried out 342 operations over the last year, many attacks on Kurdish-led forces, according to the Syrian Observatory.

The prison break in Hassakeh was its most sophisticated operation yet. It was part of a recent uptick in attacks that have stoked fears the armed group is gaining momentum in Syria and Iraq.

Hours after the attack began on January 20, ISIL gunmen in Iraq broke into a barracks in mountains north of Baghdad, killed a guard and shot dead 11 soldiers as they slept.

The attacks were some of the boldest since the group lost its last sliver of territory in 2019 with the help of a US-led international coalition, following a years-long war that left much of Iraq and Syria in ruins.