Almost two years into the pandemic, some countries have declared their intention to start treating COVID-19 like other endemic diseases, such as seasonal flu.

Despite witnessing relatively high infection rates amid the frenetic spread of the Omicron variant, which appears to cause less severe disease but is highly transmissible according to early studies, countries including England and Ireland have drastically loosened restrictions on public life.

Denmark has announced plans to lift all restrictions next week, as its health ministry announced that COVID “will no longer be categorised as dangerous to society.”

Official messaging from political leaders in Spain, the United Kingdom, and elsewhere has stressed that societies need to learn to live with the virus.

“COVID is not going away. It’s going to be with us for many, many years, perhaps forever, and we have to learn to live with it,” Sajid Javid, the UK health minister, said last week.

“I think we are leading Europe in the transition from pandemic to endemic and we’re leading the way in showing the world how you can live with COVID.”

However, officials from the World Health Organization have warned that it is too early to treat COVID-19 as an endemic disease, stressing that the evolution of the virus is uncertain and noting that on a global scale the pandemic continues to rage.

“We still have a huge amount of uncertainty and a virus that is evolving quite quickly, imposing new challenges. We are certainly not at the point where we are able to call it endemic,” WHO’s senior emergency officer for Europe, Catherine Smallwood, told a press briefing.

The Omicron variant continues to cause surges of infection, which have increased pressure on public health systems. According to the WHO, 21 million new coronavirus cases were reported globally last week, the highest number of weekly infections since the pandemic began. The Pan American Health Organization (PAHO) said on Wednesday that the Americas region saw its highest number of infections since the pandemic started, with more than eight million new cases.

Meanwhile, much of the global population has not been fully vaccinated against COVID, increasing the chances of more severe disease among them. Low vaccination rates in many countries also make the emergence of a new variant more likely, which could derail attempts to treat COVID as endemic.

What does endemic mean?

The United States Centers for Disease Control and Prevention (CDC) defines endemic “as the constant presence and/or usual prevalence of a disease or infectious agent in a population within a geographic area”.

“In public health [during endemicity] we have an expected and anticipated number of cases over a time period in a geographical region.”

An epidemic is defined as a disease that affects a large number of people within a community, population and region. A pandemic is an epidemic that has spread to multiple countries or continents.

When authorities decide to transition to treating a disease as endemic, it sometimes affects the measures that were previously implemented during the pandemic stage.

“If something is a pandemic or an epidemic, we have to take certain precautionary measures against it to limit its spread. And with an endemic, those same measures aren’t needed or required,” Dr Anna Blakney, an assistant professor in the Michael Smith Laboratories and School of Biomedical Engineering at the University of British Columbia, told Al Jazeera.

In the case of COVID, Blakney said this could mean governments are starting to imply they would like to do “less to control this as far as restrictions, testing, masking or any of the measures that have been shown to work against COVID”.

Is COVID-19 transitioning to an endemic disease?

Any potential transition would vary from country to country, depending on several factors such as how widespread the disease is within national borders and the level of immunity within the population.

“When you say that a disease [has] transitioned from epidemic to endemic, there are no hard and fast rules to determine that,” Dr Amesh Adalja, a senior scholar at the Johns Hopkins Center for Health Security, told Al Jazeera.

However, he said one marker could be when you do not see the disease undermining hospital capacity.

“Once COVID-19 loses that ability through enough immunity … I think the world is going to get to endemicity, but it’s going to be on different timelines depending upon where you are at,” he added.

According to Adalja, endemicity is inevitable in the case of COVID.

“I think that from the very first day in the COVID-19 pandemic, it was always going to be the case that this became an endemic respiratory virus,” Adalja said.

He added that the main priority was to get more tools, like vaccines, antivirals, and monoclonal antibodies, that would help to reduce the strain on hospitals and health systems.

“Omicron has accelerated this process … we are basically at the cusp of endemicity and it may be the case that after Omicron surge washes over the countries of the world, we will be clearly in the endemic phase,” Adalja added. 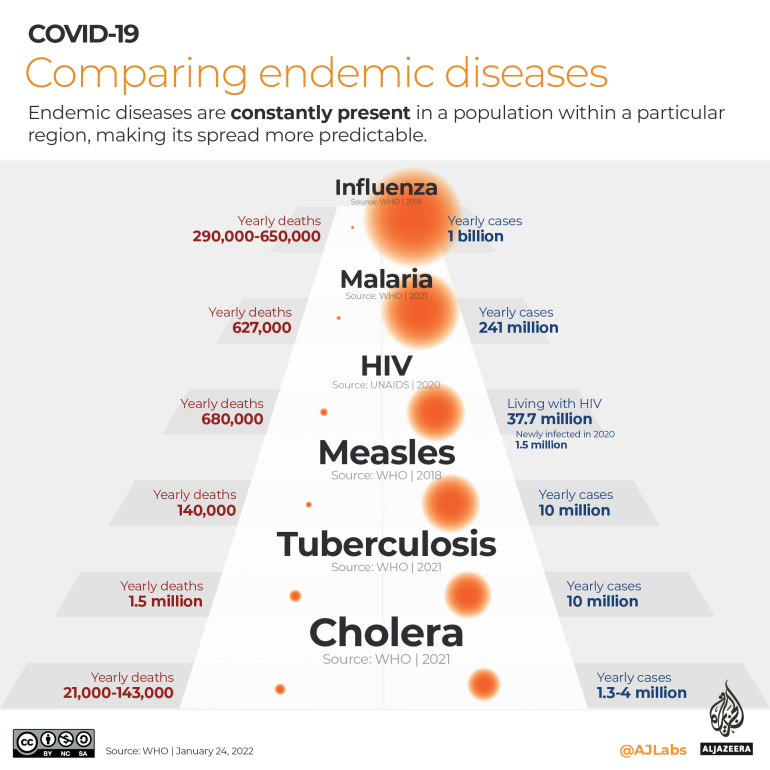 How close is the world to exiting the pandemic phase?

Hans Kluge, the WHO Europe director, said on Sunday the Omicron strain has moved Europe into a different stage of the pandemic.

“It’s plausible that the region is moving towards a kind of pandemic endgame,” Kluge told news agency AFP in an interview, adding that Omicron could infect 60 percent of Europeans by March.

He said Europe could expect months of global immunity once the current wave subsides due to the vaccines or the infection.

“We anticipate that there will be a period of quiet before COVID-19 may come back towards the end of the year, but not necessarily the pandemic coming back,” Kluge said.

But the following day, WHO Director-General Tedros Adhanom Ghebreyesus appeared to shoot down Kluge’s comments.

“It is dangerous to assume that Omicron will be the last variant, or that we are in the endgame … globally the conditions are ideal for more variants to emerge,” he said.

Okereke shares a similar outlook, noting a lack of knowledge about the coronavirus that is needed for the world to be able to predict the behaviour of new strains and enter endemicity.

“I don’t believe we know enough about SARS-Cov-2 to say that if a new variant emerges, this is how it will behave, or to say new variants will not emerge, we don’t know,” Okereke said.

“The key thing to reduce the emergence of new variants is to ensure that we optimise vaccination programmes globally.

“Until we do that, we run the risk of having new variants, whose behaviour we currently cannot predict,” she added.

Rates of vaccination against COVID-19 have remained low in Africa, with about 8 percent of the continent’s population fully vaccinated against the disease.

“In Africa … we do not have the luxury of significant population proportions of our population being immunised enough for us to start to say, we’ve got this, we are in a pandemic endgame,” Okereke said.

Experts warn there is still not enough information to know with precision what follows next, particularly with new strains.

“If the virus starts becoming a milder virus, we would be okay,” Blakney said. “But if it suddenly becomes really contagious and lethal then we’re not going to be in a good place.”

What does the early data around the Omicron variant tell us about the pandemic?

Omicron was first discovered in South Africa in late November and early research has found the strain appears to be highly transmissible. Symptoms of the infection appear to be less severe than in other variants, while early studies indicate that the symptoms experienced by vaccinated patients seem to be milder than among the unvaccinated.

Its high transmissibility has also proven to be a challenge. Its spread has caused a significant strain in health systems, with many countries struggling with an influx of patients.

“Omicron is so widespread that we’re still seeing a spike in the hospitalisations and deaths from it,” Blakney said.

The current situation “tells us that as long as there is a risk of significant transmission and emergence of new variants we have to keep our guard up”, Okereke said.

” It tells us that, although our vaccines may not be the perfect solution … they have a significant role in reducing the severity of illness in the vaccinated.

“But the Omicron variant also shows us that we can’t let our guard down, we need to continue to improve the tools we have in our portfolio to manage this pandemic,” she added.

How can the world exit the pandemic?

There is a consensus among most health experts that a way of ending this pandemic is by making vaccines and treatments available on a global scale.

“We need to keep making new vaccines, and understanding how long that immunity lasts. We also need to scale up the production of every tool that we have, antivirals, testing, monoclonal antibodies, and make sure they are widely accessible.

“We have the tools, it is just a matter of making them accessible to people all around the world,” she added.