Two Tajik civilians have been killed during overnight clashes at Tajikistan’s contested border with Kyrgyzstan, where a ceasefire has since been established.

As a result of the latest deadly flare-up, “10 people were injured on the Tajik side, of which six were servicemen and four were civilians,” Tajikistan’s national security committee said in a statement.

Tajikistan added that the two dead were a man born in 1986 “killed by a mortar shell fired by Kyrgyz soldiers into his yard” and an ambulance driver born in 1964.

Asia Plus, a private Tajik news agency, reported that as many as 17 Tajiks had been injured.

Kyrgyzstan’s health ministry said Friday that at least 11 of its citizens were being treated for moderately serious injuries.

Close to 1,500 Kyrgyz citizens were evacuated from villages near where the conflict took place at the intersection of Sughd province and Kyrgyzstan’s southwestern Batken province, the emergencies ministry said.

Kyrgyzstan’s national security committee said Friday that it had reached an agreement for “a complete ceasefire” with Tajikistan during a meeting at the border between provincial governors and border service representatives.

The neighbours also agreed to withdraw forces, coordinate patrols of the frontier and ensure the flow of traffic along a strategic road that passes between both countries.

“At present, the situation on the state border of Tajikistan and Kyrgyzstan is stable, the causes and factors of the border conflict are being studied by a joint commission of the relevant structures of both parties,” a statement from the Tajik national security committee said. 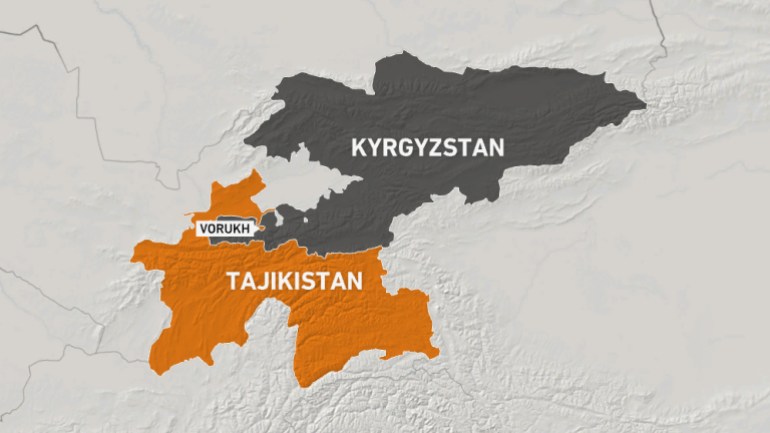 The violence that broke out Thursday evening was the bloodiest escalation between the countries since clashes that killed dozens last year.

Kyrgyz authorities said Tajik citizens had blocked a road between the provincial centre Batken and the Kyrgyz village of Isfana.

Border guards on both sides managed to get the road unblocked, but then fighting broke out.

The area surrounding Tajikistan’s Vorukh, an enclave surrounded by Kyrgyz territory, is a key flashpoint.

Almost half of the pair’s 970-kilometre-long border (600 miles) is disputed and progress on delimitation in recent years has been glacial.

The border between the two countries, both of which host Russian military bases and are closely allied with Moscow, is poorly demarcated.

At least 49 people were killed in fighting between the two countries last April which escalated from a similar border clash and ignited fears of a wider conflict.