The escalation of tensions between Yemen’s Houthi rebels and the United Arab Emirates (UAE) prompted humanitarian organisations on the ground to sound the alarm, as the United Nations forecasts January will “almost certainly” be a record-shattering month for civilian casualties in the country.

Doctors Without Borders (Medecins Sans Frontieres, or MSF) warned the recent air raids launched by the Saudi-led coalition following drone and missile attacks on the Emirati capital mark a dramatic escalation in violence.

“We expect another wave of internally displaced people, increased number of casualties, access constraints due to air strikes … these are some of the things we expect at the moment,” Ahmed Mahat, MSF’s head of mission in Yemen, told Al Jazeera.

The UN special envoy for the country, Hans Grundberg, and humanitarian coordinator David Gressley warned on Tuesday that January will likely record the highest monthly death toll in the conflict after air raids and missile attacks hit hospitals, telecommunication infrastructure, airports, a water facility and a school.

According to a joint statement by Grundberg and Gressley, the escalation is exacerbating an already severe humanitarian crisis, complicating efforts to provide relief, threatening regional security, and undermining efforts to bring an end to the conflict.

Since the beginning of January, eight million Yemenis have received reduced assistance, the UN said, because of the spike in violence.

On the ground in the capital Sanaa, Mahat confirmed the UN’s assessment. “The front line is really active, more than ever,” the MSF head of the mission said. “This year we thought the situation would be calmer, that there would be negotiations, and the Yemenis would be spared more agony. Instead, we have seen an escalation.”

Yemen is in the throes of a fourth wave of COVID and has seen a resurgence of preventable diseases, including polio, measles and diphtheria. Additionally, a fuel blockade by the Saudi-led coalition is causing acute shortages and crippling Yemen’s already frail health system.

“We use generators to power our hospitals, so fuel is a big issue,” Mahat said. “No fuel in the tanks also means less people in need of medical assistance can reach the hospitals in the first place.”

Air attacks have also made intervention treacherous or impossible. Parts of the country remain inaccessible, including Yemen’s energy-producing Marib region, which Houthi rebels have been fighting to seize for months.

MSF said it fears a surge in the number of internally displaced people in the Marib region in dire need of humanitarian assistance, as funds and resources dwindle.

The World Food Programme (WFP) warned more than five million people in Yemen are on the brink of famine, and 50,000 others were living in famine-like conditions. In December, the UN agency said it was running out of funds to continue to provide food assistance to 13 million people.

“We call on all parties to the war to refrain from escalating the conflict and to respect international law,” Mahat said. 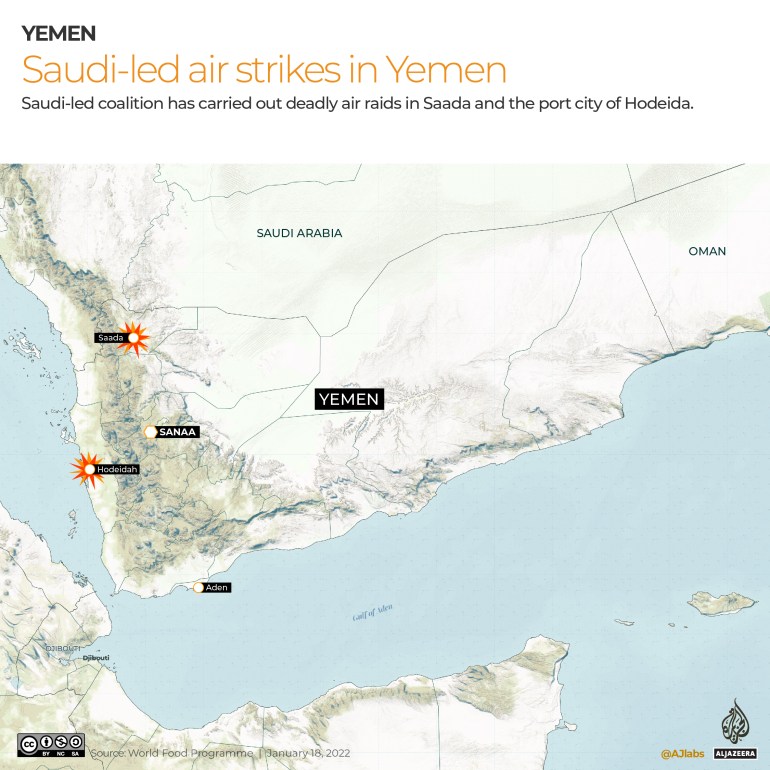 The UAE on Monday said it intercepted and destroyed two ballistic missiles over Abu Dhabi that were fired by Yemen’s Houthi rebels, stoking tensions even as the Gulf nation said it had intercepted the threat.

Monday’s attack came a week after another Houthi drone-and-missile attack on the capital killed three civilians.

The UAE, a member of a Saudi-led military coalition backing Yemen’s government in its seven-year fight against the Houthis, announced it would retaliate while taking measures in accordance with international humanitarian law to protect civilians.

MSF has been vocal in denouncing a Saudi-led coalition air attack on Saada City Remand Prison in the early hours of January 21 that killed 91 people and wounded more than 200, according to Yemen’s health ministry.

A coalition statement called reports the prison had been hit and detainees hurt “baseless and unfounded”.

MSF staff based in Saada who witnessed the attack said the raid was “undeniable”.

“At around 2:30am we heard the first air strike, then five minutes later the second air strike and a big explosion,” an MSF staff member, who declined to be named for security reasons, told Al Jazeera.

Then a third air raid hit Saada city. “There is no way to deny that this is an air strike, everyone in Saada city heard it,” the MSF staff member said. “I live 1 kilometre from the prison and my house was shaking from the explosions.”

The local Gumhouriyyeh Hospital was soon overwhelmed with the wounded. MSF’s unit in Saada sent emergency supplies to the hospital, but soon another truckload had to be dispatched from the capital.

“The escalation is not something new, it was like this since the beginning,” the MSF staffer said, adding Saada has set a grim record for the number of air attacks it has witnessed in the seven-year conflict.

Living in the city has meant accepting the bouts of violence that come whenever tensions flare up. “It’s the nature of the war.”

On Wednesday, Amnesty International said the Saudi-led coalition used a precision-guided munition made in the United States to hit the detention centre.

“The laser-guided bomb used in the attack, manufactured by US defence company Raytheon, is the latest piece in a wider web of evidence of the use of US-manufactured weapons in incidents that could amount to war crimes,” the humanitarian watchdog said.

The UN chief has called for an investigation into the attacks in Saada. “The secretary-general calls for prompt, effective and transparent investigations into these incidents to ensure accountability,” Antonio Guterres’s spokesman, Stephane Dujarric, said.

The International Rescue Committee has also condemned the air attack, saying it was the worst civilian casualty incident in three years. “Additional attacks risk harming more civilians and will further restrict humanitarian organisations’ access to those most in need,” IRC said in a statement on Wednesday.

Grundberg and Gressley called for restraint.

“We remind the parties that being at war does not absolve them of their obligations under international humanitarian law, which strictly prohibits disproportionate attacks and requires that all feasible precautions be taken to avoid civilian harm,” the UN officials said, adding they had been in contact with all sides to rekindle dialogue and reach a political settlement.

“We urge all parties to engage with these efforts immediately and without preconditions.”