Only first names have been used in some instances to protect identities.

Nobody in Russia wants a war, says Ekaterina, a 25-year-old master’s student at Moscow’s Higher School of Economics.

“Everyone is quite worried that there will be a third world war, and everyone hopes the conflict will be resolved peacefully,” she told Al Jazeera by phone from the Russian capital, as tensions over Ukraine showed no sign of easing.

“Lately, more and more people are also becoming increasingly upset about how Russia and Russians are portrayed in most foreign media, like villains or some poor, weak-willed people or drunkards. It is simply not true.”

For Roman, a 53-year-old businessman, the current crisis is far from novel.

He hails from a city – known as Gorlovka in Russian and Horlivka in Ukrainian – in the self-proclaimed Donetsk People’s Republic (DNR) run by Russia-backed separatists but now lives in Moscow.

“There’s shelling [there] every day,” he said. “I talk to my former classmates in Donetsk a lot and they say that Ukrainians are shooting at Donbas every day,” he added, referring to the conflict-ridden region where the DNR lies.

As Western powers fretted over a significant Russian buildup of troops at the Ukraine border, fearing Moscow is planning an attack, DNR officials recently said there were some 120,000 Ukrainian troops stationed near the line of contact with the Donbas, and more military equipment was arriving every day.

“People in Donbas have a negative opinion of Ukraine’s leadership,” said Roman. “If you were being fired at every day, how would you feel?”

Roman says his brother, a separatist fighter, was killed in 2017 while covering another fighter from mortar fire.

“He was 42. He died on January 8, my birthday,” he said. “He was in the separatist militia from the very beginning.”

Roman is convinced that if it comes to military action in Donbas, Russia is more likely to attack Ukraine.

But he hopes that common sense will prevail and that an all-out war can be avoided.

While Russia has repeatedly claimed that it has no military designs on Ukraine, these denials have done little to ease Western concerns.

NATO members have sent military equipment to support Kyiv and Western powers, led by Washington and London, have toughened threats of sanctions should Moscow make a move towards an attack.

Russian diplomat Konstantin Gavrilov said recently that over the past few years, the West has claimed that Russia has invaded Ukraine “at least 21 or 25 times”.

According to Maxim Suchkov, acting director of the Institute for International Studies at Moscow’s MGIMO University, “the Russian military deployments alongside the Ukrainian border at this moment are not about invading Ukraine”.

“There are no clear political goals behind that intervention. And I haven’t heard anyone clearly explain what the political goals could be because, ultimately, wars are fought to achieve certain political goals, not just for the hell of it.”

He believes there are two possible motivations for Russia’s buildup – to deter Kyiv from further offensives in the separatist Donbas, and to compel the West to ultimately accept its security proposals.

Last December, Russia sent a list of demands for security guarantees to the US, saying that fulfilling them would de-escalate the crisis.

Primarily, it wants NATO to permanently block Ukraine from becoming a member. The Kremlin also calls for the end of NATO drills near Russia’s borders and for NATO to withdraw from Eastern Europe.

Moscow received US and NATO responses on Wednesday, which it said failed to address these key points.

Yevgeny Popov, a member of the Russian State Duma, said possible NATO expansion towards Ukraine is meant to put “further pressure on Russia”.

“[Our demands] are necessary conditions for guaranteeing the safety and security of our citizens,” he told Al Jazeera.

“A NATO country armed with ballistic missiles on our borders is a direct threat to our citizens.”

In Russia’s view, its security demands are not negotiable.

Others in Russia agree that NATO bases appear to have “surrounded” Russia.

“When Putin said that Russia is cornered or pushed against the wall and has no way to retreat, I don’t think that was a metaphor, but rather a real reflection of how the Russian leadership feels at the moment,” said Suchkov.

“Because if Ukraine is in NATO, then it is not just at Russia’s doorstep, it literally is on the threshold.”

A recent survey by the Levada Center, an independent Russian pollster, suggests that 50 percent of Russians believe the US and other NATO countries are responsible for aggravating the situation in eastern Ukraine.

Sixteen percent believe it is Ukraine’s fault while about 4 percent blame Russia.

“We are seeing how Ukraine is being pumped full of weapons at an incredible scale,” said Popov. “Ukraine, whether it wants it or not, is ready for a full-scale war.

“But in Russia, no one is talking about a full-scale invasion of Ukraine. Our troops are on our territory. We are conducting exercises, but this is merely in response to the aggressive statements, to threats of sanctions and threats to ‘cripple our economy’, as [US Secretary of State Antony] Blinken has put it.”

For many in Russia and Ukraine, the latest frictions are simply another chapter of a long saga.

According to the Levada Center, most Russians believe that a war between Russia and the West has been around for a long time: an invisible, cold, information war.

Some believe the US and the West are deliberately trying to drag Russia deeper into conflict.

At the same time, the prevailing opinion is that Russia will be forced to respond.

Levada Center quotes one respondent as saying: “America and Britain are pushing Ukraine to take aggressive action towards Donbas, and by doing so, they are trying to force Russia to stand up for Russian citizens who live there, in order to justify further sanctions.”

Popov describes the situation as “dangerous”.

“It is obvious that if Ukraine begins an offensive against the Donetsk and Luhansk People’s Republics, Russia will intervene. We are obliged to protect their lives and safety.” 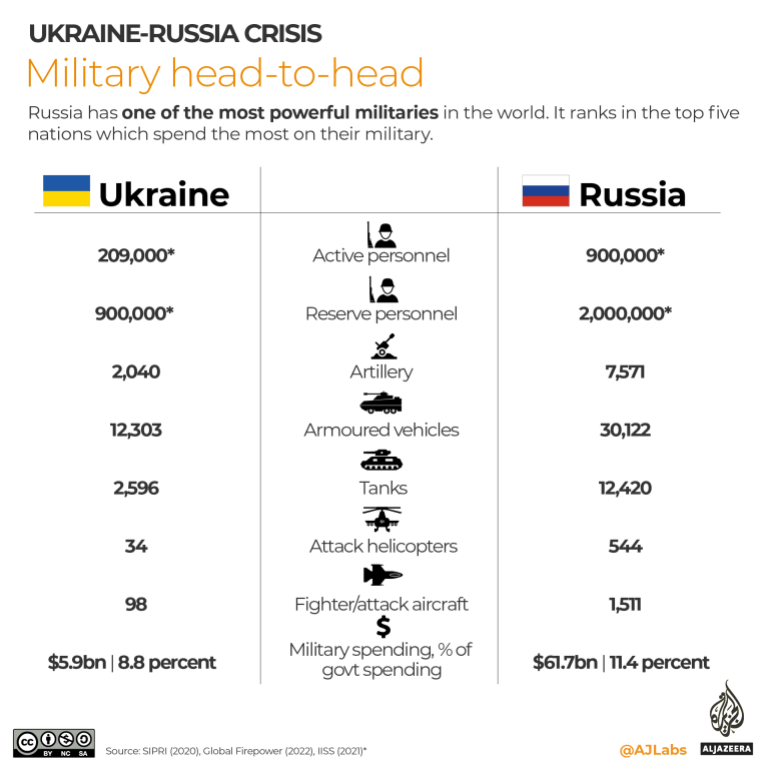 He stressed again, however, that there are no plans to attack Ukraine: “We still consider Donbas to be Ukrainian territory.”

Suchkov also warned that an attack on Donbas could derail any attempts at dialogue.

“US and NATO are supplying weapons and military trainers to Ukraine, military contractors are filling up the country,” he said. “It may embolden the leadership in Kyiv – or other actors in Ukraine willing to derail these talks – to launch a military offensive on Donbas that would provoke a response from Russia.”

This scenario is, therefore, not entirely off the table.

“This could quickly escalate into a major conflict,” he said.