*Only first names have been used in some instances to protect identities.

Kharkiv, Ukraine – Ukrainian soldiers shuffle through a sprawling post-Soviet factory. They enter a dusty auditorium, laughing as they fumble around in the dark.

“We still don’t know if there are lights in here,” one says.

This factory was recently given to Kharkiv’s Territorial Defence Forces, just one of many being opened across the country as Ukraine looks to ramp up its reserve forces in the face of increased Russian aggression.

“The main idea behind these forces is to prepare Ukrainians for a big national resistance,” explained Mykhailo, a member of the Ukrainian Special Forces.

The Territorial Defence team in Kharkiv, which is about 40km (25 miles) from the Russian border, comprises a diverse group of soldiers with different skills and reservists who can prepare the local population to protect their homes and the city in the event of an invasion.

Although they only moved in a few days ago, the building’s dilapidated walls are filled with notices.

Echoes ring through the building as stern-looking reservists in combat uniforms rush about clasping folders.

According to some experts, Kharkiv, a city of more than one million people, is located at a potential entry point that Russian Forces might use if they decided to invade Ukraine. 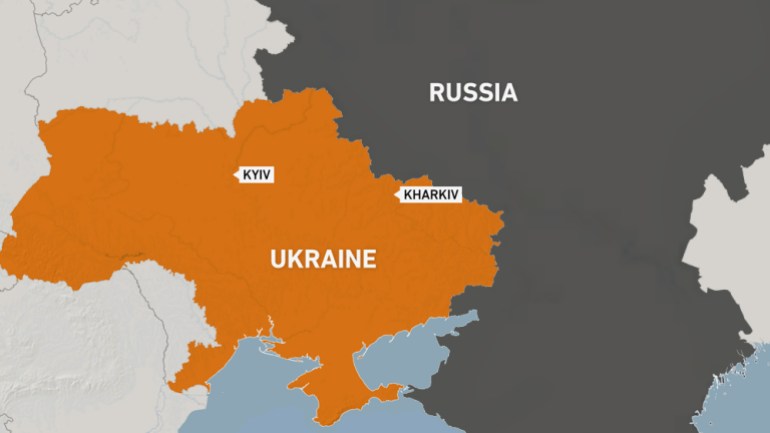 Last Thursday, Volodymyr Zelenskyy, Ukraine’s 43-year-old president, further increased fears in the city by suggesting that Kharkiv “could be occupied” by Russian forces.

Zelenskyy stated that in this case, Russia would use the pretext that it was protecting the city’s Russian-speaking population.

As fears of an invasion stalk the city, interest in the reserve forces has swelled.

“To fight for the protection of your own house is a big motivation,” said Mykhailo. Locals are also learning how to use anti-military weapons, stage resistance groups, and perform sabotage activities in the event of occupation by Russian Forces.

The new Territorial Armed Forces bases popping up all over the country are the result of a law introduced during an earlier round of tensions last year.

The latest escalation has sparked a similar response, with the Ukrainian Government announcing a new law that permits the use of hunting rifles in acts of territorial defence.

According to Mykola Levchencko, an officer in the reserves, many people he has trained with have purchased personal weapons and ammunition, often imported from the US, Israel or Turkey.

Vasily, a major in the Territorial Forces in Izyum, a city near Kharkiv, believes that Russia would face a well-trained force that could protect the key cities.

“A lot of the local population have front-line experience,” he said. “They are prepared psychologically for combat in the event of an invasion.”

In central Kharkiv and away from these hidden preparations, there would be nothing to indicate that the city is at the forefront of a potential invasion.

Instead, cafés and restaurants are packed, a winter fairground is in full swing, and international students throng the streets.

But the threat of an attack is something that Kharkiv residents have had to face and learned to live with since Russian-backed separatists invaded Eastern Ukraine and Crimea in 2014.

At a temporary ice-rink constructed in the city’s main square, a group of friends aged 16 and 17 chat as they skate among families enjoying a day out.

Like many of the city’s young people, they are aware of the current tensions.

“This is a big world war, and we are stuck in the middle; something will happen sooner or later,” said Alina.

But it is a feeling she has learned to cope with over the years; now, she wants to live a normal teenage life, listening to music, hanging out with friends and studying.

Many of the Territorial Defence Forces’ latest recruits talk of a sense of duty.

“I promised my family I would protect them,” said Roman, a 27-year-old recruit from Izyum. He now believes there is a much higher risk of an invasion – about 50 percent – than in previous years.

Despite the ongoing preparations, there is no appetite for a war with Russia among the reservists.

“No one wants this, not me, not my family,” said Vasily.

Instead, Roman says, they would like to see a peaceful resolution.

“In my opinion, fighting makes no sense; we all should talk and communicate.”