Tonga is calling for “immediate aid”, with an urgent need for fresh water and food, as it assesses the damage caused by Saturday’s eruption of Hunga-Tonga-Hunga-Ha’apai.

The volcano exploded in a massive eruption on Saturday – said to be the biggest since Pinatubo in the Philippines in 1991 – triggering a tsunami and blanketing the Pacific island nation in volcanic ash.

“Communications remain down and the full extent of the harm to lives and property is currently unknown. What we do know is that Tonga needs immediate assistance to provide its citizens with fresh drinking water and food,” Parliament Speaker Lord Fakafanua said in a statement shared on social media.

The appeal came as experts detected another eruption at Hunga-Tonga-Hunga-Ha’apai.

The Darwin Volcanic Ash Advisory Centre said the volcano erupted at 22:10 GMT on Sunday, with the Pacific Tsunami Warning Centre saying it had detected large waves in the area: “This might be from another explosion of Tonga volcano. There are no known earthquakes of significant size to generate this wave.”

Australia and New Zealand on Monday sent surveillance flights to assess the damage in Tonga and said they were coordinating with the United States, France and other countries on the humanitarian response.

Our P3 Orion has been dispatched to Tonga to support the assessment of the extent of damage caused to Tongatapu and outer islands. This is a significant event and NZ🇳🇿 will do all it can to offer its support and assistance. Our thoughts and prayers are with the people of Tonga 🇹🇴

Australia’s Minister for the Pacific, Zed Seselja, said initial reports suggested there had been no mass casualties and that the airport “appears to be in relatively good condition”, but there was “significant damage” to roads and bridges.

One British woman was reported missing, he said.

The surveillance flights would assess the situation in outer islands where communication is completely cut off.

The Red Cross has offered its assistance and the Pacific Islands Forum said it was ready to assist in what it described as a “once in a millennium natural disaster”.

“In the coming hours and days we will get a clearer picture of the situation in Tonga, as well as the rest of the Blue Pacific Continent,” Secretary General Henry Puna said in a statement. 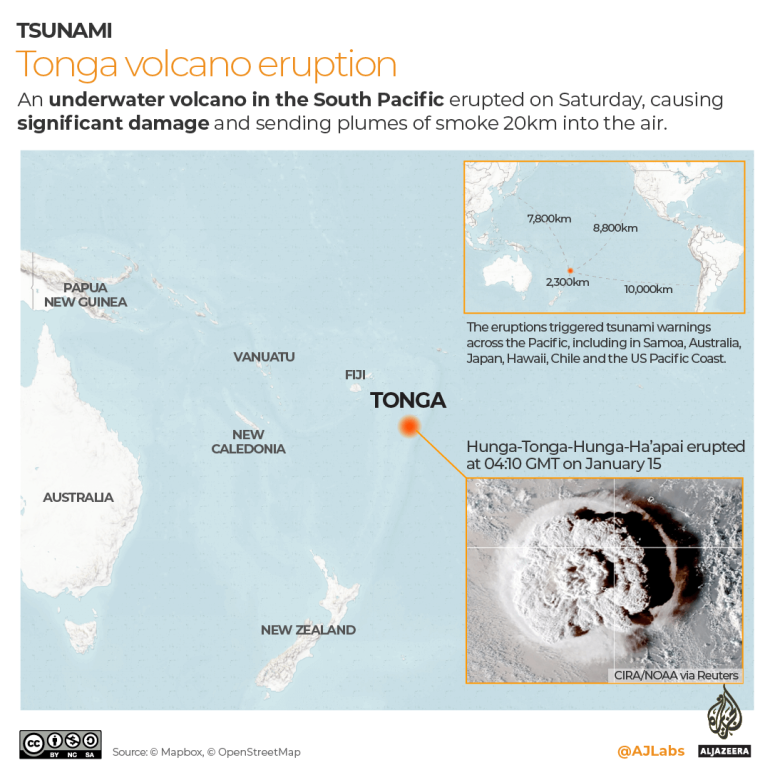 International communication has been severely hampered by damage to an undersea cable, which could take more than a week to restore, and Australia and New Zealand were assisting with satellite calls, according to Curtis Tu’ihalangingie, a top Tongan diplomat to Canberra.

Telephone networks in Tonga have been restored but ash was posing a major health concern, contaminating drinking water.

“Most people are not aware the ash is toxic and bad for them to breath and they have to wear a mask,” Tu’ihalangingie told the Reuters news agency.

Crippled communications left Tongans outside of the country desperate for news of loved ones.

“I cannot reach my family, there is no communication,” Filipo Motulalo, a journalist with Pacific Media Network, told AFP.

“Our home is among those close to the area that was flooded already so we don’t know how much damage there is.” 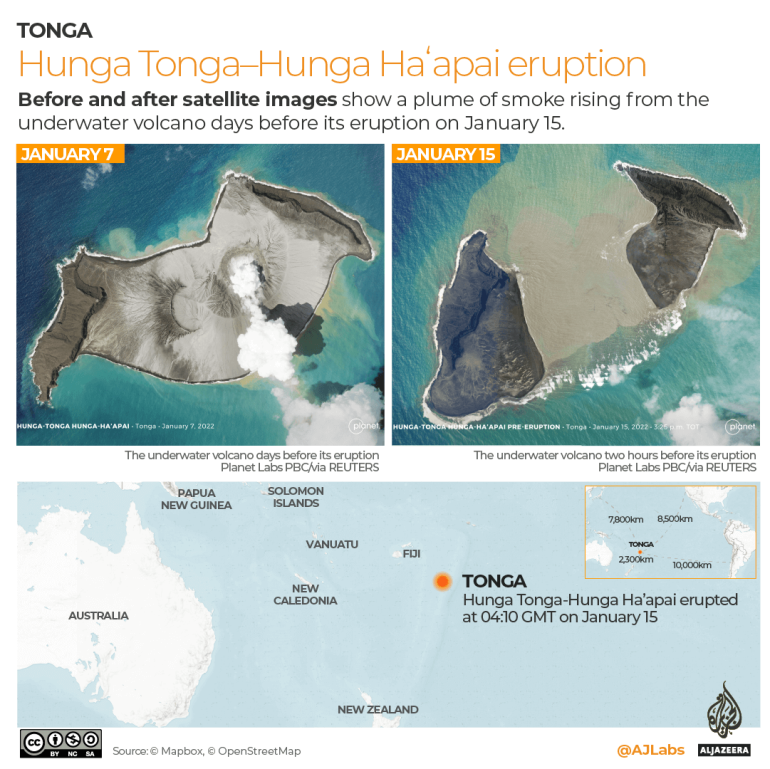 “I think the worst part is the blackout and the fact that we know nothing,” he added. Many fretted about elderly relatives coping in volcanic dust-filled air.

Samiuela Fonua, who chairs the board at Tonga Cable Ltd., which owns the cable that connects Tonga to the outside world via Fiji, said the cable appeared to have been severed about 10 to 15 minutes after the eruption.

He said the cable lies atop and within coral reef, which can be sharp.

Fonua said a ship would need to pull up the cable to assess the damage and then crews would need to fix it. A single break might take a week to repair, he said, while multiple breaks could take up to three weeks.

He added that it was unclear yet when it would be safe for a ship to venture near the undersea volcano to undertake the work.

The effect of Saturday’s eruption was felt across the Pacific, in other island nations such as Fiji, where video shared on social media recorded the explosive sound of the eruption, and in North and South America.

A vast cloud of ash is now spreading westwards towards Australia.