Tongans have fled to higher ground after an undersea volcano erupted, sending tsunami waves crashing onto the South Pacific island and triggering warnings as far as the US West Coast.

There were no immediate reports of injuries or the extent of the damage as communications in the island nation – home to about 100,000 people – remained down on Saturday.

A tsunami wave measuring 1.2 metres (4 feet) was observed in Tonga’s capital Nuku’alofa, according to Australia’s Bureau of Meteorology.

Tonga Meteorological Services said the tsunami warning was in effect for all of Tonga.

New Zealand’s military said it was monitoring the situation and remained on standby, ready to assist if asked.

The Islands Business news site reported that a convoy of police and military evacuated Tonga’s King Tupou VI from his palace near the shore. He was among many residents headed for higher ground.

The volcano also erupted on Friday, when small tsunami waves of up to 0.3 metres (1 foot) were recorded, the Tonga Meteorological Office said.

Dramatic images from space showed the moment the latest eruption of the Hunga Tonga-Hunga Ha’apai sent a mushroom of smoke and ash into the air and a shockwave across the surrounding waters.

Earlier, the Matangi Tonga news site reported that scientists observed massive explosions, thunder and lightning near the volcano after it started erupting early on Friday.

The site said satellite images showed a 5km-wide (3-mile) plume of ash, steam and gas rising into the air to about 20km (12 miles).

The eruption was so intense it was heard as “loud thunder sounds” in Fiji more than 800km (500 miles) away, officials in Suva said. Authorities in nearby Fiji also issued a warning, telling people to avoid the shoreline due to strong currents and dangerous waves. 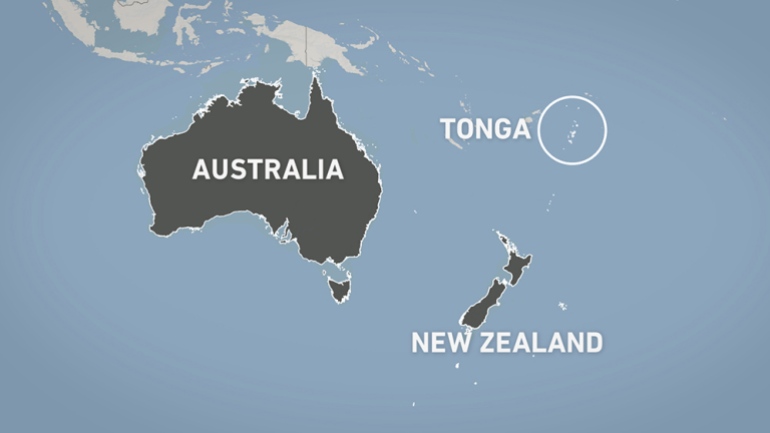 More than 2,300km (1,400 miles) away in New Zealand, officials warned of storm surges from the eruption.

New Zealand’s emergency management agency issued an advisory on tsunami activity for its north and east coasts with the areas expected to experience strong and unusual currents, and unpredictable surges at the shore.

The National Emergency Management Agency said some parts of New Zealand could expect “strong and unusual currents and unpredictable surges at the shore following a large volcanic eruption”.

Late on Saturday, the Pacific Tsunami Warning Center said the threat to American Samoa appeared to have passed, although minor sea fluctuations could continue.

Japan’s meteorological agency issued tsunami warnings in the early hours on Sunday and said waves as high as three metres (9.84 feet) were expected in the Amami islands in the south. Waves of more than a metre were recorded there earlier.

Volcanologist David Rothery at Open University told Al Jazeera that those on the the beach or very low lying coastline in affected areas should move away from the shore.

“Basically just keep up the beach if you’re worried about the tsunami risk, as you should be. You should heed those risks. ” he told Al Jazeera from Silverstone, UK.

“I expect the biggest tsunami from this eruption has now happened. In terms of the volcanology because there is a lot of ash in the sky. There’s going to be ash fall in Tonga. That’s a hazard,” he added.

The volcano is located about 64km (40 miles) north of Nuku’alofa. Back in late 2014 and early 2015, a series of eruptions in the area created a small new island and disrupted international air travel to the Pacific archipelago for several days.

Warnings in the US

In Hawaii, Alaska and along the US Pacific coast, residents were asked to move away from the coastline to higher ground and pay attention to specific instructions from their local emergency management officials, said Dave Snider, tsunami warning coordinator for the National Tsunami Warning Center in Palmer, Alaska.

The first waves to hit the continental United States were measured at about 0.3 metres in Nikolski, Atka and Adak, Alaska.

The wave was about 0.2 metres (0.7 feet) at Monterey, California, the US National Tsunami Warning Center said in a tweet.

The National Weather Service said there were reports of waves pushing boats in Hawaii. Sea level fluctuations were also beginning in Alaska and California, according to the National Tsunami Warning Center.

Beaches and piers were closed across Southern California as a precaution but the National Weather Service tweeted there were “no significant concerns about inundation”.

Strong rip currents were possible, however, and officials warned people to stay out of the water.