Benin, a small coastal country in West Africa, has been relatively unscathed from a security crisis that has wreaked havoc in its northern neighbours across the Sahel region for much of the past decade.

However, fears are growing over a spillover of violence within its borders as armed groups operating in the landlocked Sahel countries push for expansion into coastal states.

Last month, President Patrice Talon pledged his government will be “more determined and more vigilant” in the face of growing threats. It came after Beninise military officials said two soldiers were killed and several others wounded when fighters attacked a military post in the northern Atacora region, near the border with Burkina Faso.

The al-Qaeda-linked Jama’at Nusrat al-Islam wal-Muslimin (JNIM) armed group claimed responsibility for the attack, saying in a message shared across social platforms it killed four soldiers. Two other attacks have been reported in recent months in the same border area where JNIM has been active, although these have not been confirmed.

Michael Matongbada, a Beninese researcher at Institute for Security Studies (ISS), said the rare hit-and-run on Atacora was the first attack to be claimed by an armed group in the country.

“The expansion of groups beyond their initial areas of operation and influence in the Sahel region is a reality to be acknowledged,” Matongbada told Al Jazeera. 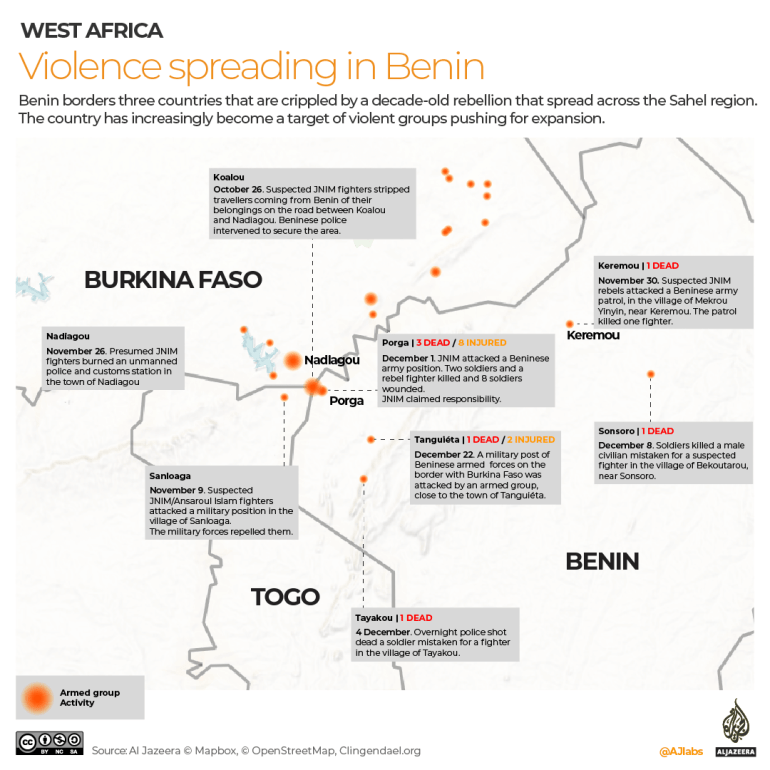 Such an expansion, however, has not affected only Benin. A number of other West African coastal states have faced a growing number of border attacks, raising fears over the expansion of armed groups affiliated with ISIL (ISIS) and al-Qaeda in the region.

In a rare public appearance last year, the head of France’s foreign intelligence service Bernard Emie said al-Qaeda-linked fighters were working on plans to extend their attacks in the Gulf of Guinea, particularly in Benin and Ivory Coast.

Seven members of Ivory Coast’s security forces died in five separate attacks in the north of the country last year. And the year before that, the country was hit by a cross-border assault that killed 14 security personnel in the same region. Although there have been no claims of responsibility, the assault was a shocking reminder for Ivory Coast that it is still a prime target, although it has imposed additional security measures following an al-Qaeda-claimed beach resort attack in 2016 that killed 19 people.

Neighbouring Togo has also been on a high alert against the possible incursion of armed groups. Security forces in Togo said they repulsed an attack last November by unidentified armed men who had crossed its northern border with Burkina Faso. It was the first-ever face-off Togo had with fighters since it deployed in 2018 hundreds of soldiers all over its northern borders with Burkina Faso and Benin.

Experts say infiltrating coastal countries offers vital advantages for the armed groups in Burkina Faso and Mali, such as creating new supply lines for food and equipment and unlocking new sources of income from banditry.

“West African coastal countries serve as supply or transit zones, particularly for motorcycles, spare parts and fertiliser. They are also sources of finance such as the sale of stolen livestock for consumption,” researcher Matongbada said.

Kars de Bruijne, a senior research fellow at Clingendael Institute, said gaining the upper hand in the Sahel battlefields might be another reason for the armed groups’ expansion of operations further south.

“The militant groups seek to prevent the concentration of military force of West African states and their Western partners. This is best viewed as a semi-guerilla strategy that spreads the forces of your opponent thin. Hence, attacks everywhere warrant protection everywhere and prevent large-scale military operations,” de Bruijne told Al Jazeera.

In large swaths of the Sahel region, the armed groups have exploited local dissatisfactions, lack of governance and security deficits in order to grab territory, impose their rule and control economic activities. Analysts say similar vulnerabilities are also present in parts of the coastal nations, thus posing a greater risk for increased violence.

“Throughout the northern provinces in Benin, there are serious farmer-herder tensions that are not sufficiently addressed,” de Bruijne said. “There are also problems around land ownership with overlapping land systems that lead to competition between local authorities and results in winners and losers, as well as tensions over the management of the natural parks.”

In Ivory Coast, a regional powerhouse that still binds up its wounds from a brutal civil war a decade ago, there are grievances that the fighters could tap into, observers warned.

“We need to take seriously dissatisfaction from certain ex-combatants from the Ivorian civil war who have not been able to get the expected benefits from the integration process,” Marc-Andre Boisvert, a researcher on Sahelian security at FrancoPaix Research Centre, told Al Jazeera.

“Also, northern Ivory Coast witnesses sporadic conflicts between farming and herder communities”, which increases frustration about governance and creates “a growing sense of marginalisation”, he said.

Burkina Faso said in November last year that its army had conducted a joint five-day military operation with Ivory Coast, Ghana and Togo which resulted in the arrest of more than 300 suspects and the seizure of weapons, ammunition, vehicles and drugs.

Nonetheless, Boisvert believes, the coastal states remain vulnerable as long as they continue to see armed groups only as a security problem, and not address longstanding governance or political issues.

“The focus is on ‘hard security’, while few efforts have been done to prevent or to find political solutions to what is now a regional problem,” he said. “Countries that see the attacks only as an ‘external problem’ makes it easier to simply focus on security, and ignore these issues that can be exploited by militants.”