Brazilian President Jair Bolsonaro is to meet by videoconference on Thursday with truckers leading blockades of highways in multiple states across the country, the infrastructure ministry said.

Stirred up by the president’s call to action against the Supreme Court at Tuesday’s political rallies, the trucker protests had partially blocked highways in a half dozen states early on Wednesday, but gained steam as Bolsonaro was hesitant to publicly denounce them.

By Thursday morning, the infrastructure ministry said there was congestion on federal highways in 14 states due to the protests with blockades in five states: Bahia, Maranhao, Minas Gerais, Mato Grosso do Sul and Santa Catarina.

Bolsonaro, who has overseen the world’s second deadliest coronavirus outbreak and is down in the polls as he grapples with rising inflation and stubborn unemployment, has long sided with truckers over high fuel prices.

Bolsonaro has in recent months repeatedly attacked the Supreme Court for preventing him from being able to govern. He has called for the replacement of some justices whom he accuses groundlessly of supporting an electoral system that is vulnerable to fraud. The trucker protest is in part to support this call.

Faced with this tough conundrum, Bolsonaro has yet to speak publicly about the strikes. On Wednesday night, an audio message from the president circulated in truckers’ messaging groups.

“Speaking to the truckers out there, who are our allies, these blockades hurt our economy,” Bolsonaro said in the message reviewed by Reuters. “They cause supply shortages, inflation and hurt everyone, especially the poorest.”

In a subsequent video message, Infrastructure Minister Tarcisio Freitas said Bolsonaro’s message was genuine, saying it “showed the president’s concern about this blockade”.

Freitas said the trucker strike would pressure the economy, fan inflation and hurt the poorest. Many are concerned about the state of the country, he added, “but we can’t try to sort out one problem by creating another”.

An 11-day truckers’ strike in 2018 caused food prices to surge, grocery market shelves to empty of some products and gas stations to run out of fuel. It caused billions in losses and revealed the vast power that organised truckers possess.

Some truck drivers who stopped on major highways said they were forced to come to a halt by pro-Bolsonaro colleagues who had vandalised their vehicles so they could not leave.

Bruno Rodrigues, 32, carrying auto parts, said he was stopped one hour south of Sao Paulo at 4am [07:00 GMT] by men who threatened to smash his windscreen with rocks.

“They slashed my tyre. It’s outrageous. If the stoppage had some benefit, OK, but they are hurting their own brothers of the road,” Rodrigues said. He said he was losing time for deliveries and would have to pay the tyre repair out of his pocket.

Photos on social media showed cars lining up at gas stations in several states amid concern fresh shortages could be in store. 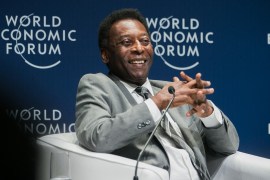 The 80-year-old, who has been in poor health in recent years, is due out of intensive care on Tuesday, hospital says. 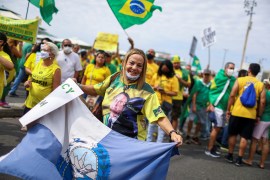 Rallies for and against Bolsonaro on Brazil national day

Thousands have converged on Brazil’s cities for pro and anti-Bolsonaro demonstrations on Independence Day. 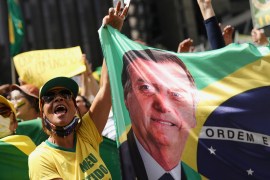