In a move that caps decades of activism, crews have removed one of the United States’ largest remaining Confederate statues – a towering statue of Robert E Lee in Richmond, Virginia.

Gathered spectators cheered as the 6.4-metre (21-foot) tall bronze statue Lee, the commander of the Confederate Army during the US Civil War, riding a horse was hoisted off its 12-metre (40-foot) pedestal on Wednesday, 131 years after it was erected in the former capital of the Confederacy as a tribute to the Civil War leader.

Activists have called for the statue’s removal for years, saying it glorified the US South’s slave-holding past. However, officials had long resisted its takedown, as have some residents of Virginia who argued moving the monument would be akin to erasing history.

Still, 10 days after George Floyd, an unarmed Black man, was killed under the knee of a Minneapolis, Minnesota police officer in May 2020, sparking nationwide protests against police brutality and racism, Democratic Governor Ralph Northam announced plans to take down the statue.

WATCH LIVE: As the removal of the Robert E. Lee monument in Richmond takes place. https://t.co/ylZytLmLck

Two subsequent lawsuits stalled the removal for more than a year, but rulings last week by the Supreme Court of Virginia cleared the way for the statue to be taken down.

“This was a long time coming, part of the healing process so Virginia can move forward and be a welcoming state with inclusiveness and diversity,” Northam said once the statue was lowered to the ground.

He added the removal represents “more than 400 years of history that we should not be proud of.”

Black Lives Matter signs were seen in the crowd, with some spectators chanting: “Whose streets? Our streets!” and singing “Hey hey hey, goodbye.”

The city has removed more than a dozen other Confederate monuments on city land since Floyd’s death, but the Lee statue – one of the largest and most recognisable Confederate statues in the country – is considered particularly significant.

“We put things on pedestals when we want people to look up,” Northam said in June 2020 when he announced the removal plan. “Think about the message that this sends to people coming from around the world to visit the capital city of one of the largest states in our country. Or to young children.”

Plans for the future

The removal began Wednesday with a large crane hoisting the 11-tonne statue off its pedestal as about 200 spectators looked on from a distance.

The sculpture is expected to be cut into two pieces for transport, although the final plan is subject to change, said Dena Potter, a spokeswoman for the state’s Department of General Services.

After the statue is taken down, crews on Thursday will remove plaques from the base of the monument and will replace a time capsule that is believed to be inside.

The Lee statue was created by the internationally renowned French sculptor Marius Jean Antonin Mercie and is considered a masterpiece, according to its nomination to the National Register of Historic Places, where it has been listed since 2007.

When the monument arrived in 1890 from France, an estimated 10,000 Virginians used wagons and rope to haul its pieces more than two kilometres to where it now stands.

The statue was the first of five Confederate monuments to be erected on Richmond’s Monument Avenue in the wake of the US Civil War, which ended in 1865. They were erected as Jim Crow racial segregation laws were on the rise in the South.

The Northam administration has said the government would seek public input on the statue’s future.

The pedestal will be left behind, at least in the short term, amid efforts to rethink the design of Monument Avenue.

Some racial justice advocates have said the graffiti-covered pedestal should remain as a symbol of the protest movement that erupted after Floyd’s killing. 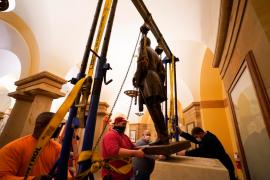 The statue of Robert E Lee is to be replaced with a statue of civil rights activist Barbara Johns. 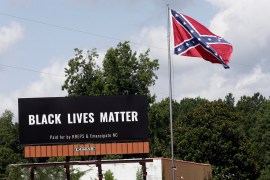 US: Maryland repeals Confederate call to arms as state song

The Civil War-era song has for decades been a subject of debate that gained new urgency amid racial injustice protests. 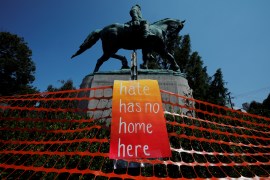