Moroccan voters have headed to the polls to choose a new parliament and local leaders in elections that have been reshaped by the pandemic, amid widespread disillusionment with the political system.

About 18 million people were expected to cast their ballots on Wednesday, the third time since a new constitution was introduced in 2011 in the wake of the February 20th Movement, the local version of the Arab Spring.

However, as few political reforms have materialised since the popular uprising, the turnout rate is expected to be as low as 35 percent, Al Jazeera’s Bernard Smith reported from the capital, Rabat.

“It is an indication really of the apathy that there seems to be over these elections,” he said.

As of 5pm (16:00 GMT), two hours before polls closed, around 36 per cent of registered voters had cast their ballots.

Morocco is a constitutional monarchy where the king holds sweeping powers. He picks the prime minister from the party that wins the most seats in parliament and appoints key ministers.

The palace also sets the economic agenda for the country of 37 million people and has commissioned a new development model that the new government is asked to implement.

The new constitution adopted in 2011 was supposed to move the country closer to a system of constitutional monarchy, but it did not alter the king’s central role. As a result, regardless of who holds elected office, major decisions come from the palace, including during the coronavirus crisis.

“Why should I vote? I do not expect voting to improve my situation because politicians care only about themselves,” said Khalid, a worker at a hotel in Rabat, who gave only his first name. 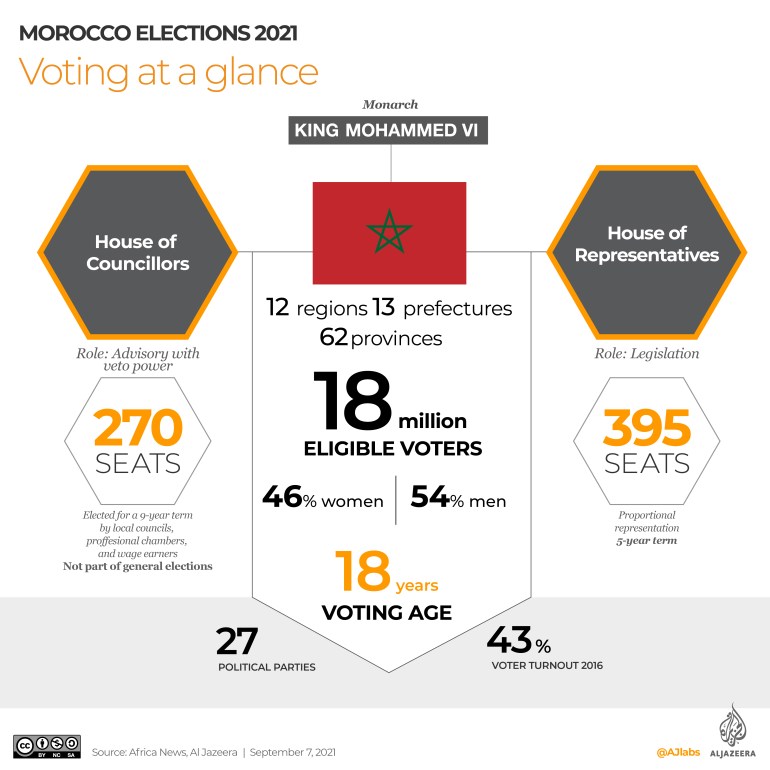 Sitting Prime Minister Saad Eddine el-Othmani of the Justice and Development Party (PJD) cast his vote in Sale, near Rabat, but questions loom on whether this is going to be his last as prime minister because of a change in the electoral system.

“It’s difficult to give a precise prediction,” he told Al Jazeera. “There are four parties that are contesting for parliamentary majority and we are one of them.”

El-Othmani said the election laws and reforms were introduced to reduce the PJD’s share of votes.

“These parties failed in competing with us through engagement with the people and that’s why they united to introduce a law that doesn’t take into consideration the popular vote and instead divides seats in an unfair way,” he said.

Voters will choose 395 deputies in the house of representatives and 678 seats in regional councils under a new law that calculates the allocations of seats based on the number of registered voters, rather than the number of those who actually cast a ballot.

Such an electoral system could make it harder for the ruling PJD to remain in power. Though election polls are banned, analysts expect the PJD to lose ground to its more pro-establishment rivals, the National Rally of Independents (RNI) and Authenticity and Modernity (PAM) parties, which define themselves as social democrats.

Abdellatif Wahbi, the head of the Authenticity and Modernity party, told Al Jazeera the election results would likely be “extremely close”.

“I believe there won’t be more than two or three seats separating the winner from second place,” he said.

Wahbi said voter apathy is not the result of a loss of faith, but rather the fact that the elections are taking place during unique times.

“It’s a global pandemic so we haven’t been able to organise large rallies like we used to. But in our direct meeting with people we have been able to connect with them and the process will be a smooth one.”

Mohammed Masbah, president of the Moroccan Institute for Policy Analysis and an associate at Chatham House, said while the change in the electoral system will allow smaller parties to gain access to the parliament, it will pave the way for more division in national and local politics.

“Political parties will find it very difficult to fill coalitions and find consensus when you have a large number of political parties, for example, leading a municipality or a government,” said Masbah. 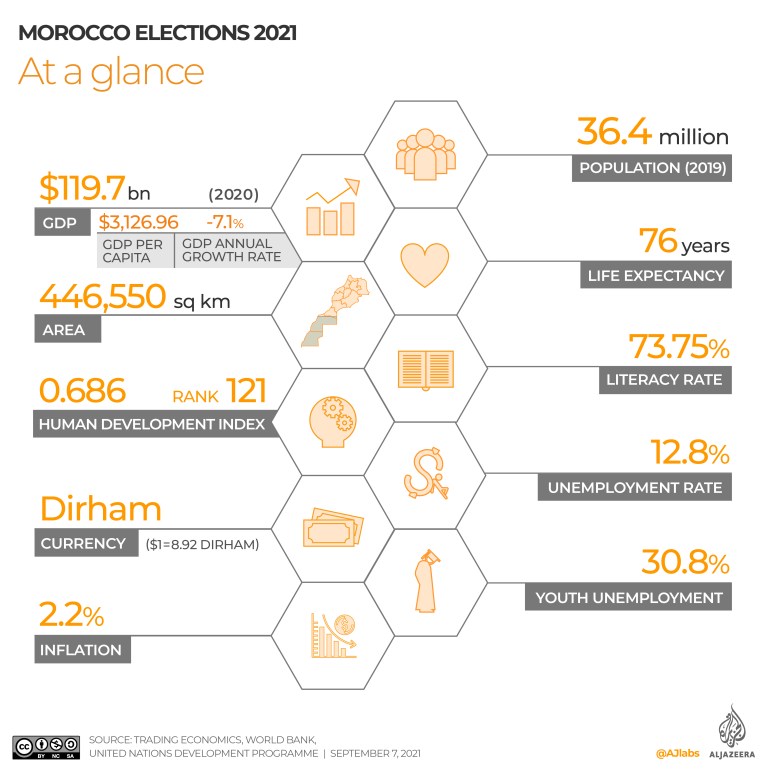 A battered economy is another key issue the new government will have to face. While the coronavirus pandemic has greatly affected the country that heavily relies on tourism, analysts argue systemic problems need to be addressed.

“Structural problems with the economy linked to high levels of youth unemployment and corruption need to be added to the pandemic,” Masbah told Al Jazeera.

The plan’s major aims include reducing the country’s wealth gap and doubling per-capita economic output by 2035.

Morocco’s economy is expected to grow 5.8 percent this year after it contracted by 6.8 percent last year under the combined effects of the pandemic and drought.