Afghanistan’s former President Ashraf Ghani has said it was never his intent to “abandon the people” as he apologised to Afghans for the way his rule came to an end when he fled the country last month on the same day the Taliban entered the capital, Kabul.

In a statement published on Twitter on Wednesday, Ghani said he left on August 15 at the urging of the palace security to avoid the risk of bloody street fighting, and again denied stealing millions from the treasury.

“Leaving Kabul was the most difficult decision of my life, but I believed it was the only way to keep the guns silent and save Kabul and her 6 million citizens,” he said.

Ghani took the opportunity to deny the claims that he had taken millions of dollars out of the country when he fled, even saying that he was ready to be investigated to prove his innocence.

The claims originated with a former Afghan ambassador to neighbouring Tajikistan, Zahir Aghbar, who alleged Ghani took about $169m with him when he left the country.

Ghani, who is currently in Abu Dhabi, lamented that, like his predecessors, he too had been unable to bring peace and prosperity to the war-torn country.

“It is with a deep and profound regret that my own chapter ended in a similar tragedy to my predecessors,” he said. “I apologize to the Afghan people that I could not make it end differently.”

Taliban fighters took over Kabul after a lightning-fast offensive launched in May as the United States and NATO began withdrawing troops.

In the space of 10 days before taking the capital, the Taliban had seized a string of other cities, meeting little or no resistance in a staggering rout.

In an interview with Afghan outlet TOLO News, US Secretary of State Antony Blinken said Ghani had told him the night before he fled Afghanistan that he was “prepared to fight to the death”.

Responding to another question, Blinken said he did not know whether Ghani had taken millions of dollars in cash with him.

“That, I don’t know. What I do know is that he left the country, and again, in a very short period of time. The security forces as an institution collapsed and so did the government.”

Ghani’s statement came a day after the Taliban announced their new interim government, with established hardliners in all key posts and no women, despite previous promises to form an inclusive administration.

Separately on Wednesday, the president of the International Committee of the Red Cross appealed to other humanitarian organisations to return to Afghanistan and for the World Bank to unlock funds to support the country’s weak healthcare system. 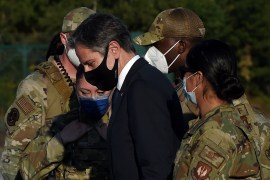 Top US diplomat criticises new Afghan government but says administration’s engagement with the Taliban will continue. 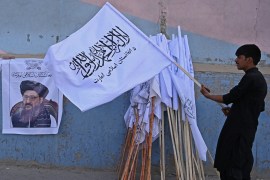 US expresses concern over ‘track record’ of people named to top posts, while UN agency decries exclusion of women. 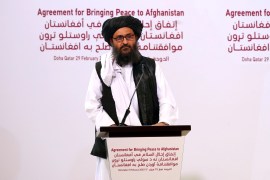 Who are the men leading the Taliban’s new government? 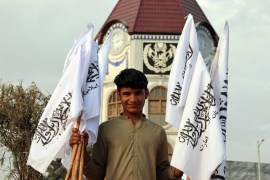 Afghanistan: What’s next for those who stayed?

The Stream looks at what life is like for ordinary Afghans in the wake of the chaotic US withdrawal.