Ever since the United States declared a so-called global “war on terror” in response to the September 11, 2001, attacks on New York and Washington, the mission and goals of the effort have gone through many iterations as the level and scope of the threat changed over the decades.

“Our war on terror begins with al-Qaeda, but it does not end there,” former US President George W Bush told Congress days after the attacks, on September 20, 2001. “It will not end until every terrorist group of global reach has been found, stopped and defeated.”

Twenty years later, after two US-led wars in Iraq and Afghanistan that killed tens of thousands of civilians, and trillions of dollars spent, the threat of attacks on the US still looms, although it looks different than it did in 2001. The power of groups that utilise mass killings as a tactic around the world has waxed and waned since. The goal of national powers to eradicate them completely remains unfulfilled.

Organisations with the power to launch a successful attack on US soil like that of al-Qaeda on 9/11 may have been reduced, splintered or weakened, but groups with similar ideological sympathies have spread to other parts of the globe, particularly in Africa, the Middle East and Asia.

While many of al-Qaeda’s leaders targeted by the US following the 9/11 attacks were captured or killed – most notoriously Osama bin Laden, who was killed in an American raid on his Pakistan compound in 2011 – al-Qaeda has remained resilient, with affiliated groups in as many as 17 countries.

“We’ve seen repeatedly over the past 20 years how we counter a terror threat in one region and then, opportunistically, a concatenation of events enables terrorists to migrate and take hold of another region,” said Bruce Hoffman, a senior fellow for Counterterrorism and Homeland Security at the Council for Foreign Relations.

Not being predominantly centred in one part of the world, their geographic proliferation makes these fighter groups more challenging to track and contain. These groups lack the ability to orchestrate a wide-scale attack on the US comparable to 9/11, but their continuing spread speaks to the challenge of carrying out Bush’s stated goal of stamping out “terrorist groups”.

“They’re in more places than they were in 2001. There’s no question,” said Seth G Jones, director of the International Security Program at the Center for Strategic and International Studies.

While the ability of these groups to flourish again in Afghanistan is still yet to be seen, the risk of it becoming a safe haven without a dominant US presence has risen substantially.

“The emergence of a Taliban government does raise prospects about Afghanistan again becoming a sanctuary for terrorist groups. I think we’re at a point where we may start to see a resurgence of Salafi jihadist organisations,” said Jones.

“The war is not over in any way, shape or form. Targeted killings are ongoing. There will be active resistance. The policy moving forward is a combination of diplomatic and developmental efforts, plus military intelligence. These wars are not going away. This is at least a generational struggle.”

Tactics to combat prospective attacks have changed, as nations like the US have learned what is and is not effective.

In 2001 and the years that followed, the US responded to attacks in part by waging a full-scale military invasion of Afghanistan, which harboured al-Qaeda. In the case of the war in Iraq, the US used its “war on terror” as a smokescreen to justify its invasion and presence.

However, the appetite for, and the assumed effectiveness of, that level of all-encompassing warfare has diminished significantly in recent years.

“The war in Afghanistan has ended with a repudiation of the era of major military operations to remake other countries,” said Stephen Wertheim, a senior fellow at the Carnegie Endowment for International Peace.

In 2021, however, the more pressing concern may be for threats coming from home, not abroad. Domestic threats in the US have grown in recent years, particularly among right-wing groups that rose in membership during former President Donald Trump’s administration and continued to be an increased risk.

A report conducted by the US Office of the Director of National Intelligence released in March warned that US “domestic violent extremism poses heightened threat”.

The growth of domestic threats combined with the spread of groups with affiliations or affinity to al-Qaeda and ISIL and further destabilisation in Afghanistan ensure that – despite two decades of consistent efforts to combat them since 9/11 – attacks on the US, whatever form they take, remain a continuing concern.

“It’s hard to look at the world today from the United States and feel any sense of safety, security or any kind of contentment,” said Hoffman. “Unfortunately, I think the sad truth and the irony is, we’re less safe, given the multiplicity of threats to the United States today.” 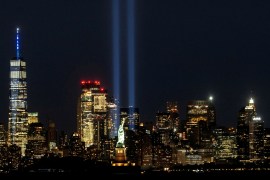 Survivors push for clarity as the 20th anniversary of the al-Qaeda attacks that killed nearly 3,000 nears. 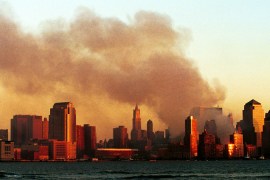 Twenty years ago, for a brief moment, the soul of the American people feared what the world fears all the time. 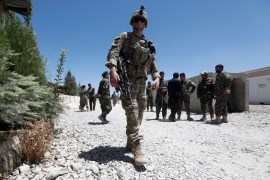