Kabul, Afghanistan – Hundreds of protesters took to the streets of the capital Kabul chanting anti-Pakistan slogans and calling for “freedom”, a day after resistance leader Ahmad Massoud called for an “uprising” against the Taliban rule.

The demonstrations – which ranged in size from several hundred to a few dozen – began on Tuesday morning and continued into the afternoon before they were dispersed by the Taliban fighters firing into the air, protesters told Al Jazeera.

Journalists also said that they were prohibited from filming, with TOLONews, a private broadcaster based in Kabul, saying at least one of their cameramen was detained for filming the protests.

A source in the traffic police from the previous administration speaking to Al Jazeera from near the entrance to the Presidential Palace, said they saw the Taliban destroy several cameras and arrest journalists as they followed protesters towards the palace.

Shakib Ghori, one of the protesters who marched towards the Presidential Palace, said that the crowd of hundreds were only calling for “freedom” and criticising the “intrusion” of neighbouring Pakistan into Afghanistan’s domestic affairs.

Ghori said though the protesters were demanding an inclusive government and that the rights of women be respected, none of their gatherings was meant to be explicitly anti-Taliban.

“We were asking for our rights. A political system that respects all Afghans. And an end to Pakistan’s constant interference in Afghanistan, that’s it,” Ghori said adding that he saw no reason for the Taliban to try and break up the protest.

“We didn’t say anything about the Taliban, so why would they fire?”

Ghori said the Taliban also began to hit people, and he was also hit by the butt of a gun. He also said that he transferred at least two injured protesters to nearby hospitals.

Demonstrators at other gatherings also reported having seen injured people. At least four protests were reported in Kabul. However, Al Jazeera could not independently verify those claims.

Protesters said their movement will continue into the coming days with more and more gatherings being planned online.

The demonstrations began late on Monday evening with hundreds of people in Kabul and the central province of Daikondi rallying and chanting anti-Pakistan slogans.

The protests came after the Taliban chief spokesman Zabihullah Mujahid warned against any challenge to their rule after capturing the Panjshir Valley, completing their control in all the 34 provinces of the country.

“No one is allowed to create chaos in any corner of the country,” Mujahid said at a news conference in Kabul on Monday.

Daroush Rahmani started his day at another protest in the north of Kabul. He said the crowd started to gather in the Khair Khana neighbourhood around 10:45am local time (06:15 GMT) and within 35 minutes the number of people grew from a few dozen to hundreds.

By 11am (06:30 GMT), he said the peaceful protest was confronted by the Taliban, firing weapons into the air. “It became a warzone, everyone was running,” the 32-year-old told Al Jazeera.

As with the other demonstrations, people in Khair Khana were chanting “Long live, Afghanistan! Death to Pakistan,” as they marched through the streets of the Afghan capital. For years, Afghanistan has accused its southern neighbour of aiding and abetting the Taliban and other armed groups in the country.

The claims of Pakistani involvement have gathered steam once again during the weekend. Supporters of the resistance front in Panjshir province accused Pakistan of providing airpower in support of the Taliban in its victory in the holdout province.

On Sunday, Pakistan’s spy chief Faiz Hameed visited Kabul, but there was no confirmation if he met Taliban officials.

Late on Tuesday, the Taliban announced that veteran leader Mullah Mohammad Hasan Akhund will lead the new government. Akhund had served as deputy foreign minister under the Taliban regime in 1990s.

That accusation gained greater traction when Massoud, the leader of an armed resistance against the Taliban, sent a voice message on Monday asking Afghans to rise up against the Taliban. He also claimed that “strangers” could be seen fighting alongside the Taliban in Panjshir. However, he provided no proof in support of his accusations.

Those reports could not be independently verified by Al Jazeera, but were consistently cited by protesters and some Afghans on social media. Days before the Taliban’s military sweep in August, #SanctionPakistan trended on Twitter, showing anti-Pakistan sentiment in the country.

There was no immediate comment from Pakistan, but it has consistently rejected the accusations of meddling in Afghanistan’s affairs. Islamabad has instead accused Kabul of proving safe havens to Pakistani armed groups.

Zalmai Nishat, a senior policy expert at the German development agency, GIZ, said the rallies were a show of the people’s “overwhelming support of Ahmad Massoud’s call for everyone inside and outside the country to stand with the National Resistance Front in any way they can.”

Nafisa Hamidi, a public school teacher who attended a smaller afternoon protest in central Kabul, mirrored that sentiment when she said what led her and her daughters to the rally.

“If we can’t fight in the resistance, we can at least raise our voices,” she said, echoing Massoud’s own statement nearly word-for-word.

“As long as we are living, we will continue to fight for our freedom,” Hamidi told Al Jazeera.

Hasan Rouhani, the organiser of the protest in Kartei Parwan neighbourhood, said he saw what transpired in the earlier demonstrations, when the Taliban began to shoot, but that the violence would not deter him from raising his voice.

“If we, the youth stay quiet, then the nation will stay quiet,” he said as the protesters headed in the direction of the Ministry of Foreign Affairs.

“We are talking about our nation, our freedom. How can we be afraid when it comes to that?” Rouhani asked. 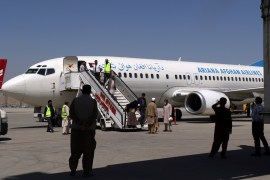 Some flights resume after a technical team from Qatar reopened Kabul airport for aid and domestic services. 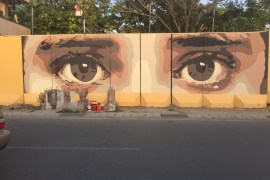 Blast walls adorned with various murals in tribute to individuals and pop art are being painted over by the Taliban. 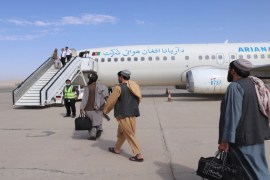 Can the Taliban ensure Kabul airport is safe to fly?

The Kabul airport is a vital gateway for humanitarian aid and crucial for the revival of Afghanistan’s economy.