The United States Justice Department has promised to protect women seeking abortions in Texas after a state law that went into effect last week banned the procedure after six weeks of pregnancy.

US Attorney General Merrick Garland said on Monday that his office is “urgently” examining its options to challenge the Texas legislation.

He also pledged to cooperate with the FBI to respond to any threats to abortion clinics, citing the FACE Act, a federal law that prohibits attacks on facilities that offer reproductive health services.

“We will continue to protect those seeking to obtain or provide reproductive health services pursuant to our criminal and civil enforcement of the FACE Act,” Garland said in a statement.

The Texas legislation, known as SB8, incentivises private citizens to sue anyone who provides or assists in an abortion after six weeks of pregnancy.

That enforcement mechanism is an apparent effort to evade judicial challenges under the federal right to privacy, which allows abortions up to 22 weeks of pregnancy.

Last week, the US Supreme Court, the top judicial authority in the country, refused to block SB8 from going into effect despite acknowledging “serious questions regarding the constitutionality of the Texas law at issue”.

The ruling said the novel approach of the law makes it unclear who is enforcing it, stressing that “federal courts enjoy the power to enjoin individuals tasked with enforcing laws, not the laws themselves.”

“By allowing a law to go into effect that empowers private citizens in Texas to sue health care providers, family members supporting a woman exercising her right to choose after six weeks, or even a friend who drives her to a hospital or clinic, it unleashes unconstitutional chaos and empowers self-anointed enforcers to have devastating impacts,” the White House said in a statement.

For his part, Garland said on Monday that the federal government “will not tolerate violence against those seeking to obtain or provide reproductive health services, physical obstruction or property damage in violation of the FACE Act”.

Every woman has the constitutional right to basic health care. SB8 is the most extreme, dangerous abortion ban in half a century & its purpose is to destroy Roe v. Wade, and even refuses to make exceptions for cases of rape and incest. This ban necessitates codifying Roe v. Wade.

Texas Governor Greg Abbott’s office did not immediately respond to a request for comment from the Reuters news agency on Monday.

US civil and immigrant rights groups have denounced the Texas law, saying Black women and other minorities, as well as low-income community members, would be hardest hit by the prohibition.

Julia Kaye, a lawyer with the American Civil Liberties Union’s Reproductive Freedom Project, told Al Jazeera last week that “devastation and chaos” prevailed in the state after the law came into effect.

“There are thousands of pregnant Texans who are sitting at their kitchen tables trying to crunch the numbers and figure out how they can possibly travel hundreds of miles out of state, in order to get time-sensitive medical care,” Kaye said.

For its part, the Refugee and Immigrant Center for Education and Legal Services (RAICES), an immigrant support centre in Texas, has said it will not abide by what it described as “archaic and sexist law”.

“RAICES assisted and gave financial support to immigrants seeking abortion in Texas for years, and will continue to do so – no matter what,” the group’s CEO and President Jonathan Ryan said in a statement last week.

“We stand in solidarity with reproductive justice organizations on the ground in Texas and we recommit to continuing the fight to help people access safe and legal abortions,” he said.

The ban on abortion in Texas is an abomination.

We want to send a very clear message: RAICES will not obey this archaic and sexist law.

We’ve funded & supported access to abortions for immigrants in Texas for years and will continue to do so.

Some laws are meant to be broken. 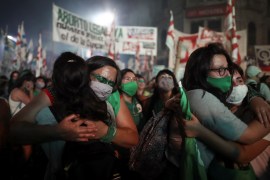 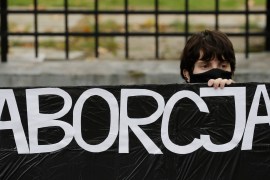 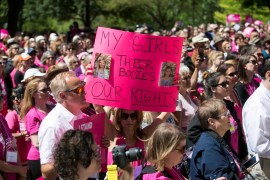