A precarious ceasefire held in the city of Deraa on Monday after negotiators for rebel forces and the Syrian government tried to close to a comprehensive peace agreement to end a three-month siege.

The tense negotiations to finalise the deal came after new government demands to deploy nine military checkpoints in Deraa, for the fighters to hand over more weapons, and to allow government forces to search the city for wanted people.

The agreement had collapsed on Friday over the new demands, and the city of Deraa was subjected to large-scale government shelling from Saturday night until Sunday afternoon, killing three people.

Negotiators for the rebel forces called on the Syrian government and its Russian ally on Friday to transfer all residents from the besieged city to Jordan or Turkey, further escalating tensions.

“The regime was negotiating in a threatening manner during the day and bombing the city overnight, causing significant losses to civilian property,” Adnan al-Masalmeh, spokesman for the rebel negotiators, told Al Jazeera.

“Regime forces targeted a delegation of elders from Deraa province as they entered the besieged area on Saturday to discuss the latest developments with the besieged residents.”

“There are still major challenges and great risks facing civilians in the city of Deraa,” she told Al Jazeera.

“Water and electricity are very rare. Civilians have difficulty obtaining basic materials such as bread, medicine and food. The Syrian government does not observe international laws, so its attacks in Deraa did not differentiate between rebels or civilians.”

Deraa, the capital of Deraa province, was the first city to protest against the rule of Syrian President Bashar al-Assad about 10 years ago.

Late last month, negotiators reached an agreement on the exit of some former rebels from Deraa to northwestern Syria. But after about 70 people were transferred, including civilians, the deal collapsed.

In early 2018, government forces took control of Deraa province and rebels surrendered their heavy and light weapons in exchange for a halt to operations and the ability to settle in Deraa city. Since then, however, dozens of fighters have been killed in ambushes and anonymous attacks.

The government has violated all agreements and besieged three neighbourhoods in Deraa since late June. Opposition forces rose up and attacked government positions in most parts of the province.

‘Preparing for a long war’

The rebels say their light weapons are needed to protect their property. Civilians say the deployment of military checkpoints will disrupt their lives and they fear Syrian forces will seize their homes during searches for wanted people.

“Since last week, rockets have been falling on the city like rain. We don’t have any lines of gun supplies, food, or medicine, and yet we were fighting fierce battles,” one rebel told Al Jazeera on condition of anonymity for security reasons.

“We trust the efforts of the elders and the local committee, but we are still monitoring the continuation of regime forces along with Iranian militias digging trenches and fortifying their positions around the city as if they were preparing for a long war.

‘I would rather die in Deraa’

About 38,000 civilians have been displaced to the outskirts of Deraa, while another 12,000 refuse to leave. Some expressed doubts about the new agreement, and rejected transfers to the rebel stronghold under Turkish control in northwestern Syria.

“We are the owners of the land. I would rather die in Deraa in my house than go out into northern Syria,” a woman in the besieged city told Al Jazeera, requesting not to be identified.

“Civilians have the right to stay in their homes and refuse displacement, and the Syrian government is responsible for all violations that may affect them,” said Kayyali. 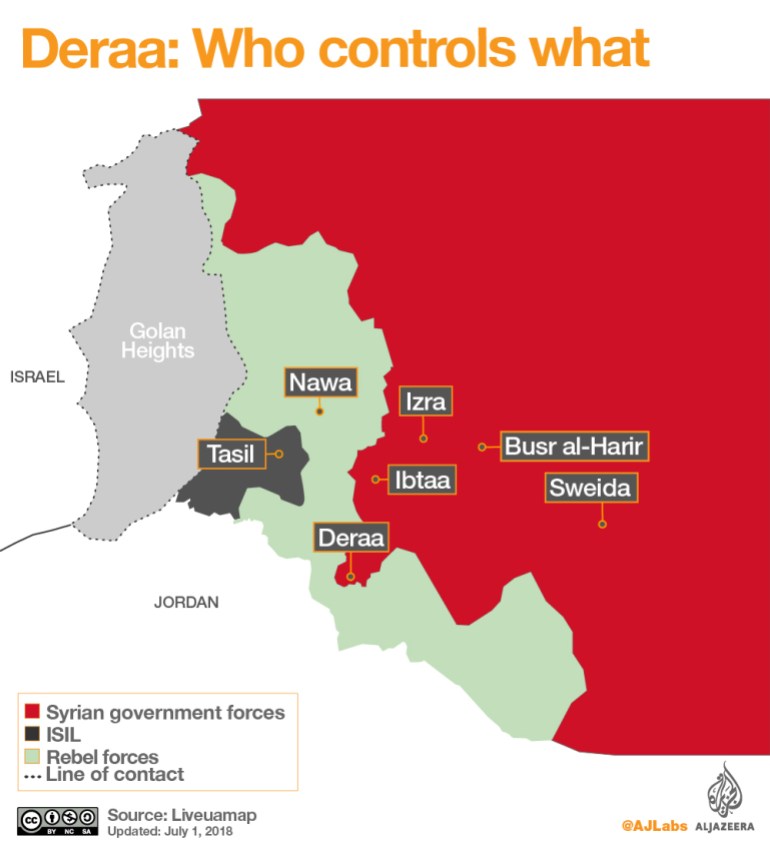