Taliban and opposition forces continue to battle to control the Panjshir Valley north of Kabul with resistance fighters saying they captured hundreds of Taliban troops.

The National Resistance Front (NRF) of Afghanistan, grouping forces loyal to local leader Ahmad Massoud, said on Sunday it surrounded “thousands of terrorists” in Khawak Pass and the Taliban abandoned vehicles and equipment in the Dashte Rewak area. 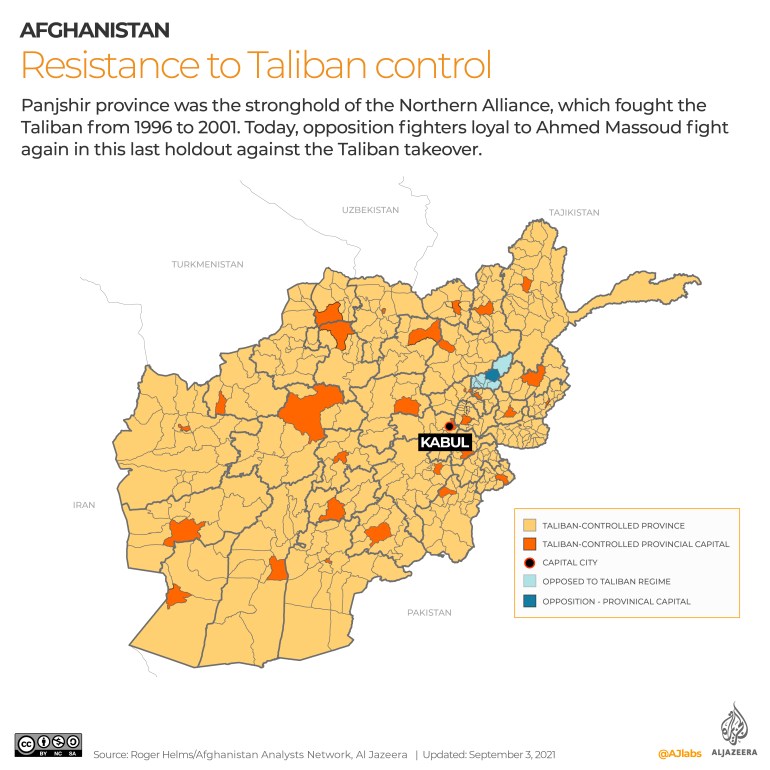 Al Jazeera’s Charles Stratford, based in the capital Kabul, reported sources on the ground said hundreds of Taliban fighters had been taken prisoner on Sunday.

“Sources within the valley are saying the NRF are claiming to have captured about 1,500 Taliban. Apparently, these fighters were surrounded,” said Stratford.

Dashti wrote on Twitter that Paryan district had been completely emptied of Taliban fighters.

Nearly 1,000 Taliban fighters were either killed, wounded, or taken captive after the exit route behind them was closed off, Dashti said. The information could not be verified independently.

Meanwhile, Taliban spokesman Bilal Karimi said on Twitter on Sunday its forces seized five of the province’s seven districts. Karimi said Khinj and Unabah districts had been taken, he said.

“The Mujahideen [Taliban fighters] are advancing toward the centre [of the province],” he wrote.

Panjshir is the last Afghan province holding out against the armed group that swept to power last month.

Both sides claimed to have the upper hand in Panjshir but neither could produce conclusive evidence to prove it. The Taliban was unable to control the valley when it ruled Afghanistan from 1996 to 2001.

US General Mark Milley, chairman of the Joint Chiefs of Staff, underscored the tenuous situation.

“My military estimate is, is that the conditions are likely to develop of a civil war. I don’t know if the Taliban is going to be able to consolidate power and establish governance,” Milley said.

If the Taliban cannot quash resistance, it will “in turn lead to a reconstitution of al-Qaeda or a growth of ISIS or other myriad of terrorist groups” over the next three years, said Milley.

Emergency, an Italian medical aid organisation, said Taliban forces had pushed further into the Panjshir Valley on Friday night, reaching the village of Anabah where the group has medical facilities.

Bill Roggio, managing editor of the US-based Long War Journal, said on Sunday there was still a “fog of war” with unconfirmed reports. Both sides claim to have inflicted heavy losses on each other.

“The Taliban army has been hardened with 20 years of war and make no mistake, the Taliban trained an army,” Roggio tweeted, adding “the odds were long” for the Panjshir resistance.

“The Taliban army was injected with a massive amount of weapons and munitions after the US withdrawal and collapse of the ANA [Afghan National Army],” he added.

But former Vice President Amrullah Saleh, who is holed out in Panjshir alongside Massoud – the son of legendary anti-Taliban commander Ahmad Shah Massoud – warned of a grim situation.

In a statement, Saleh spoke of a “large-scale humanitarian crisis” with thousands “displaced by the Taliban onslaught”.

Pro-Taliban social media have boasted of capturing swaths of the valley, but Nick Waters from the investigative website Bellingcat said the posts did not include verifiable photographs to back up the claims.

“It will be quite easy to verify a video showing Taliban within the Panjshir valley,” Waters said.

The Panjshir Valley, surrounded by jagged snow-capped peaks, offers a natural defensive advantage, with fighters melting away in the face of advancing forces, then launching ambushes firing from the high tops down into the valley. 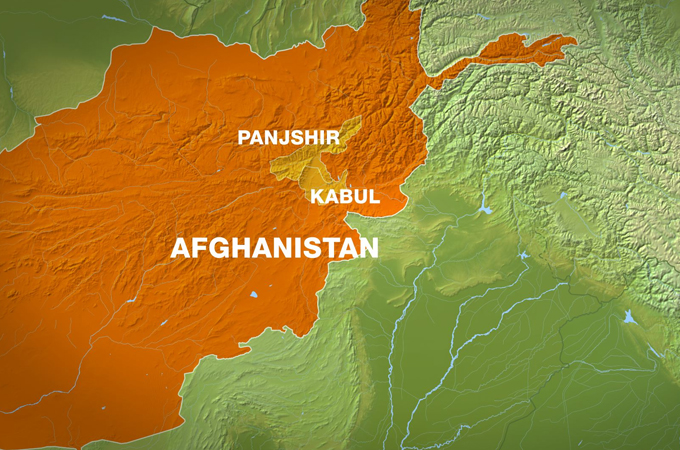