Ecuador’s national police force has said it sent hundreds of officers to a prison where a riot between rival gangs this week left at least 116 inmates dead and injured dozens more, in the deadliest outbreak of prison violence in the country’s history.

The national police said on Thursday that it sent 400 officers to the Penitenciaria del Litoral in Guayas province to regain control after Tuesday’s deadly violence.

The riot at the facility on the outskirts of Guayaquil, Ecuador’s largest city, is believed to be linked to a “war” between Mexican drug gangs. It is the fifth major incident in the port city’s prison in just more than a year.

So far in 2021, approximately 200 inmates have died in violence in Ecuador’s prisons, which have become a battleground for thousands of prisoners with ties to powerful Mexican drug cartels.

More than 100 died in violence last year alone, including many who were beheaded.

Ecuadorian President Guillermo Lasso declared a state of emergency late on Wednesday, decrying this week’s bloodshed as “bad and sad”.

“It is regrettable that the prisons are being turned into territories for power disputes by criminal gangs,” Lasso said during a news conference.

He promised to act with “absolute firmness” to regain control of the Litoral prison and free up funding to prevent the violence from spreading to other penitentiaries.

Asked on Wednesday night whether this week’s violence was linked to drug trafficking, Fausto Cobo, director of Ecuador’s Center for Strategic Intelligence, said it was “connected with other serious problems”.

“This is a problem that goes beyond an issue with the penal system,” Cobo told reporters. “It is a threat against the Ecuadorian state.”

Ecuador’s prosecutor’s office said late on Wednesday that it was still collecting information from within the detention centre.

On Thursday morning, family members of inmates at Litoral gathered outside a police morgue in Guayaquil awaiting information on the dead, a witness told the Reuters news agency. Soldiers stood guard around the prison’s perimeter. 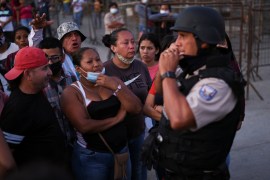 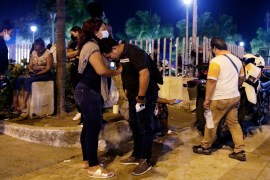 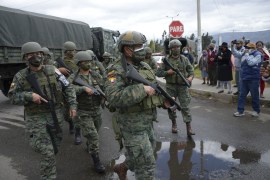 Death toll from two prison riots in Ecuador climbs to 22

President Guillermo Lasso declares a state of emergency in the country’s jail system as a new wave of violence erupts.