Al-Hakeem’s office announced on Friday that he died of a sudden medical condition it did not specify. A relative, Mohsen al-Hakeem, told The Associated Press news agency that al-Hakeem died at the Al Hayat hospital in Najaf where he was taken after suffering a sudden heart attack.

Funeral ceremonies will be held on Saturday in Najaf and its twin holy city of Karbala, a source within his office told AFP news agency.

Iraqi President Barham Salih in a statement paid homage to the “prominent figure” in Shia Islam.

The United States expressed its condolences in a statement from its embassy in Baghdad.

Grand Ayatollah Sayyid Muhammad Saeed al-Hakim (may God have mercy on him), who was a symbol of peace, love, and harmony across the region.

We ask God to bless him with His abundance of mercy.  Please accept our sincere condolences and sympathy on this great loss.

Born in Najaf in 1936, al-Hakeem was considered to be among the highest Shia religious authorities in the country.

At the time of his death, he was one of four ayatollahs of the Hawza, Najaf’s Shia seminary, along with Grand Ayatollah Ali al-Sistani, Iraq’s top Shia spiritual leader.

Along with the Afghan-born Mohammed Ishaq al-Fayadh, al-Hakeem was seen as the most likely contenders to succeed al-Sistani.

His second cousin, Sayyed Ammar al-Hakeem, leads the al-Hikma, or National Wisdom Movement, one of the largest Shia political parties in Iraq.

Al-Hakeem was imprisoned between 1983 and 1991 under the government of Saddam Hussein who feared neighbouring Iran’s 1979 Islamic revolution would set off “a similar event” in Iraq, political commentator Marsin Alshamary said on Twitter.

Al-Hakeem has written many books and publications, some of which were translated into several languages. He is survived by a wife and eight children. 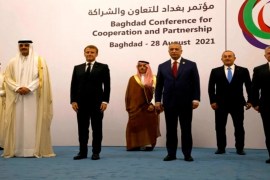 Can Iraq’s neighbours work together? 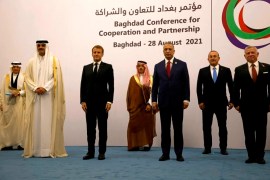 In a bid to become regional mediator and amid fears of an ISIL resurgence, Iraq hosts Middle East meeting. 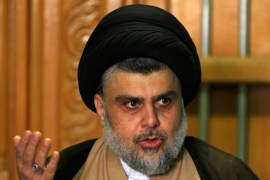 Moqtada al-Sadr says he will participate in Iraq general election

Shia scholar says political leaders had written to him with a ‘charter for reform’ to rid Iraq of corruption.