Japanese Prime Minister Yoshihide Suga has announced that he will not run in a ruling Liberal Democratic Party leadership race later this month, setting the stage for his replacement after just one year in office.

“Running in the race and handling coronavirus countermeasures would have required an enormous amount of energy,” he told reporters in Tokyo on Friday.

Suga, 72, who took over after former Prime Minister Shinzo Abe resigned last September, citing ill health, has seen his support ratings sink below 30 percent as the nation struggles with its worst wave of COVID-19 infections, ahead of a general election this year.

“Today at the executive meeting, [party] President Suga said he wants to focus his efforts on anti-coronavirus measures and will not run in the leadership election,” Toshihiro Nikai, the LDP’s secretary-general, told reporters after news of Suga’s departure was reported.

“Honestly, I’m surprised. It’s truly regrettable. He did his best but after careful consideration, he made this decision,” he added.

The shock announcement comes with Suga’s approval ratings at an all-time low over his government’s handling of the response to the pandemic.

But it was a decision that had not been foreshadowed, with Suga not dropping any hints of his plans to leave office after just a single year in power and before contesting his first general election.

Daiju Aoki, the chief Japan economist at UBS SUMI Trust Wealth Management, told the Reuters news agency that the announcement was a surprise.

“But it provided more certainty and forward-looking prospects rather than uncertainty” as the country tries to combat the coronavirus, Aoki said.

Suga had faced intense domestic criticism after deciding to go ahead with hosting the Tokyo Olympics, despite the ongoing health emergency due to the pandemic.

Ahead of the LDP meeting and leadership election on September 29, many younger legislators at the receiving end of the public’s discontent due to the administration’s handling of the health crisis expressed a loss of faith in the leadership and have hinted of a leadership challenge.

When Suga became prime minister last year, analysts had hoped that his insider’s knowledge of the complexities of Japan’s bureaucracy and skilful political deal-making from his long tenure as Abe’s right-hand man would help in the formidable challenges the country faced.

However, as the country’s pandemic situation worsened, the public soured on Suga, as he also defied the majority’s opposition to scrap the hosting of the Summer Olympics, which were already delayed for a year.

Before becoming prime minister, Suga had kept a relatively low profile and was overshadowed by Abe.

He only became better known to the public when he was the one to unveil the name of the new imperial era, Reiwa, a celebratory moment that marked the new emperor’s ascension and went viral, earning him the nickname “Uncle Reiwa”.

Behind the scenes, associates and analysts say Suga has been instrumental in shifting elements of decision-making from Japan’s sprawling bureaucracy to the prime minister’s office and taming factional rivalries within the LDP.

However, as prime minister, he was weighed down by criticism of the pandemic, which also affected efforts to revive the country’s economy.

The son of a strawberry farmer and a schoolteacher, Suga was raised in rural Akita in northern Japan and put himself through college after moving to Tokyo by working at a factory.

He was elected to his first office in 1987 as a municipal assembly member in Yokohama outside Tokyo and entered parliament in 1996. 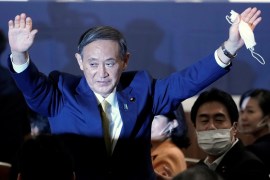 Yoshihide Suga: From cardboard factory worker to leader of Japan 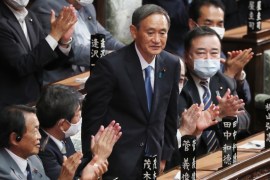 An ageing population, huge debts and a recession – we look at the challenges facing Japan’s new prime minister. 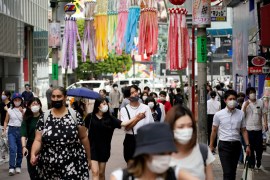 Anger over COVID-19 and prime minister’s determination to hold event despite opposition weigh on election chances.