By Joseph Stepansky and Usaid Siddiqui

World leaders and senior officials have spoken for a sixth and final day at the 76th session of the United Nations General Assembly in New York.

On Monday, Israeli Prime Minister Naftali Bennett addressed the assembly, followed by officials from the UAE, Yemen, Syria and North Korea, among others.

The annual event, held in a hybrid format due to the coronavirus pandemic, has seen new commitments to meet climate change goals and to address vaccine inequality, as well as a stark warning from UN Secretary-General Antonio Guterres of a world “on the edge of abyss”.

North Korea says it has ‘right’ to test weapons

North Korea’s ambassador told the UN General Assembly that “nobody can deny” the nuclear-armed country the right to test weapons.

“We are just building up our national defence in order to defend ourselves and reliably safeguard the security and peace of the country,” Kim Song said on Monday.

He took to the podium at the UN headquarters shortly after South Korea’s military said the North had fired an “unidentified projectile” into the sea off its east coast.

Jerandi told the General Assembly on Monday that Saied took “exceptional” measures within the constitutional framework to tackle the economic, political and health crises in the country.

“I assure you once again that democracy in Tunisia is an irreversible choice that cannot be revoked, and that human rights and collective and individual freedoms are guaranteed and protected,” Jerandi said.

On Sunday, hundreds gathered in Tunis to protest against what they called a “coup” by Saied, who suspended parliament in July and consolidated presidential powers.

Ned Price, the US Department of State spokesman, tested positive for COVID-19 and will be self-quarantining for the next 10 days.

Price, who is vaccinated, said he tested positive for coronavirus on Monday morning after returning from New York, where he attended the annual UN General Assembly meeting with Secretary of State Antony Blinken last week. Price said his symptoms were relatively mild.

“After experiencing symptoms for the first time this morning, I tested positive for COVID-19 shortly thereafter, & will now quarantine for the next 10 days,” Price said in a tweet. “I’m feeling under the weather but am grateful for the protection from severe illness offered by safe and effective vaccines.”

Syria’s foreign minister said his country’s doors are open for the safe return of refugees, and accused Western nations of taking advantage of the suffering of Syrians while pretending to care for their well-being.

“We have made it clear that Syria’s doors are wide open for the safe and voluntary return of all refugees to their country. All relevant institutions in Syria are tirelessly working towards that goal,” Foreign Minister Faisal Mekdad told the UNGA.

He said while the Syrian government and its allies are making honest efforts on this humanitarian issue, “some continue to take advantage of the suffering of Syrians to serve an agenda that has nothing to do with humanitarian objectives or the interests of Syrians”.

Republic of Cyprus leader Nicos Anastasiades rejected a two-state solution in Cyprus, disputed by his Turkish counterpart who said Northern Cyprus has been a state for six decades.

Greek Cypriot Anastasiades responded “no” when he was asked by Anadolu Agency if he was open to a two-state solution, adding “I am open to a bi-zonal and bi-communal federation.”

His remarks came before his meeting with UN Secretary-General Antonio Guterres and President of the self-declared Turkish Republic of Northern Cyprus Ersin Tatar at the UN headquarters.

The foreign minister of the United Arab Emirates called for an end to “crude regional interference in Arab affairs” that he said was undermining regional and international stability.

He also asserted that regional powers should not be excluded from negotiations on the Iran nuclear deal, which is aimed at limiting Iran’s development of nuclear technology but not its conventional arms programme.

“We cannot ignore Iran’s development of its nuclear and ballistic missile programmes, as well as its interference in the region,” al-Marar said.

Salih also accused the United States and “its European allies” of defending the “TPLF’s illicit and dangerous acts of insurrection and mayhem and marshal all the tools at their disposal to rehabilitate it at any cost”.

War erupted in Tigray in November after a political clash between Ethiopian Prime Minister Abiy Ahmed and the Tigrayans who had long dominated the national government. Eritrea has supported the Ethiopian government against the TPLF in Tigray.

The top diplomat of Yemen’s internationally recognised government in his remarks said his country needs millions more coronavirus vaccines to ensure some of the world’s poorest are not left behind.

Foreign Minister Ahmed Awad Bin Mubarak said the roughly one million doses Yemen was given are not enough to vaccinate even the most vulnerable portions of its population.

“These amounts are still not enough to cover the targeted groups,” Bin Mubarak told the UNGA.

“We hope that the donating countries will contribute to increasing the number of vaccines so that no one is left behind. No one is safe until we are all safe.”

Bahrain calls for ‘just and comprehensive’ solution for Palestinians

Minister of foreign affairs of Bahrain called for a “just and comprehensive” solution for the Palestinian people.

“My country stresses the need to achieve a just and lasting peace in the Middle East … primarily preserving the rights the brotherly Palestine people to live in a secure, stable, and prosperous nations,” Abdullatif bin Rashid Al Zayani told the UNGA.

“We call on the international community to work for a just and comprehensive solution to the Palestinian issue that meets the aspirations of the brotherly Palestinian people to establish their independent state with East Jerusalem as its capital, in accordance with the principle of the two-state solution, and resolutions of international legitimacy and the Arab Peace initiative.”

Algeria’s Foreign Minister Ramtane Lamamra reaffirmed the country’s “support for the rights of the Sahrawi people”, urging the UN to guarantee their “inalienable rights”.

“We call upon the United Nations to assume their legal responsibilities towards the Sahrawi people and guarantee inalienable rights with the organisation of a free and fair referendum in order to enable this courageous people to determine their future,” he said in his remarks.

“Their political future cannot forever be taken hostage by the intransigence of an occupying state, which has failed several times with regard to its international obligations.”

The Algeria-backed Polisario Front is fighting for the independence of Western Sahara, which was a Spanish colony until the mid-1970s and now largely occupied and administered by Morocco.

Belarus accused the West of waging a “wide-ranging hybrid war across all fronts” against the country during the past year.

“For more than a year, our country has been the target of belligerent pressure from the collective West, simply because they were not able to realise yet another “color revolution”, said Belarusian Foreign Minister Vladimir Makei.

Western countries imposed sanctions on Belarus for its crackdown on the opposition and independent news media in the wake of enormous protests against President Alexander Lukashenko last year.

Afghanistan’s ambassador to the UN has pulled out of delivering an address to world leaders at the General Assembly.

Ghulam Isaczai, who represented president Ashraf Ghani’s government that was overthrown last month, was due to defy the Taliban, who have requested with a speech but his name was removed from the list of speakers for Monday.

“The country withdraws its participation in the general debate,” Monica Grayley, a spokeswoman for the assembly’s president, confirmed to the AFP news agency, adding that Afghanistan’s mission to the UN had not given a reason for the withdrawal.

The Foreign Minister of Belarus Vladimir Makei told the UNGA that Western European countries have “fabricated” a migrant crisis along its western border.

The statement comes after Poland’s prime minister accused Russia and Belarus of a “mass organised, well-directed action” that has created a wave of migrants on the border in recent weeks. The migrants are seen as retaliation for EU sanctions on Belarus.

Belarus opposition leader Sviatlana Tsikhanouskaya has also accused Minsk of using the migrants and asylum seekers in “revenge against Lithuania, Latvia and Poland for supporting independent democratic forces, the movement for change in Belarus”. 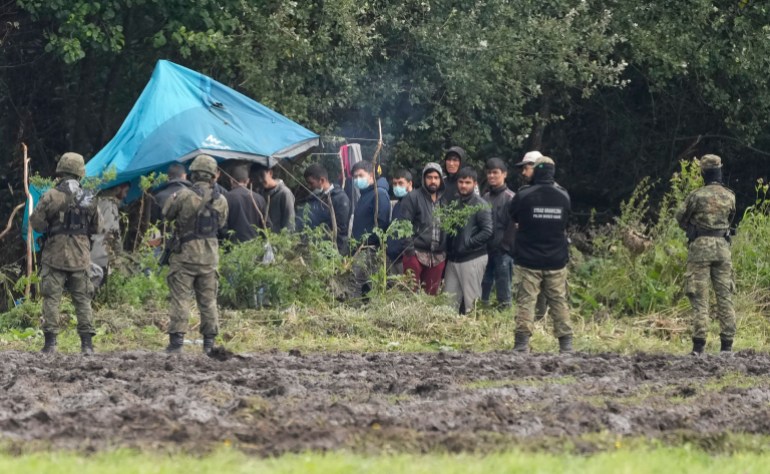 Naftali Bennett, in his first address as Israeli prime minister, gave a fiery condemnation of Iran, saying the Iran wants to rule the Middle East under a “nuclear umbrella”.

Bennett accused Tehran of crossing all “red lines” when it comes to its nuclear programme. That comes as the European powers are working to bring Tehran back to the negotiating table on the 2015 nuclear deal. Iran’s foreign minister on Friday estimated talks would start again “very soon”.

The prime minister, who did not address Palestine by name during his speech, instead referred to the normalisation of ties between Israel and several Arab countries under the US-brokered Abraham accords “rays of light”.

“We’re gaining new friends in the Middle East and beyond,” he said.

Israeli Prime Minister Naftali Bennett has promised to continue to strengthen ties after meeting with Bahraini Foreign Minster Abdullatif bin Rashid Al Zayani and UAE Minister of State for Foreign Affairs Khalifa Shaheen Almarar on Sunday, his office said, before his address to the UN in which he is expected to urge action against Iran’s nuclear programme.

Israel has trumpeted its new diplomatic relations with the UAE and Bahrain, brokered by Washington last year, as having helped create a regional bulwark against their shared foe, Iran.

Tehran denies pursuing atomic weaponry. It has been negotiating with world powers to revive a 2015 nuclear deal that curbed its uranium enrichment in return for the lifting of economic sanctions.

A summary of September 25’s UNGA session is here.