Berlin, Germany – Shortly after election exit polls began to show a slight but clear lead for Germany’s Social Democrats (SPD), its candidate Olaf Scholz took the stage of the party’s headquarters in Berlin to riotous cheers.

Scholz – whose robotic demeanour has earned him the nickname Scholz-o-mat – came uncharacteristically close to betraying emotion, as supporters and party officials drowned out his speech with minutes of applause and chanting.

As he spoke, he was being watched over by a statue of SPD icon Willy Brandt, the Cold War-era SPD chancellor who received the Nobel Peace Prize for building bridges between East and West.

Written off as a spent force until just a few months ago, Germany’s oldest and most storied political party is now in pole position to form the next government after winning its first election since 2002, as the party of outgoing Chancellor Angela Merkel – the Christian Democrats (CDU/CSU) – slumped to a historic defeat in their first contest after the announced departure of the 67-year-old.

“Our clear goal was to send the CDU and CSU to the opposition benches,” SPD co-leader Saskia Esken told reporters. “That seems to have succeeded. That is still our most important goal.” 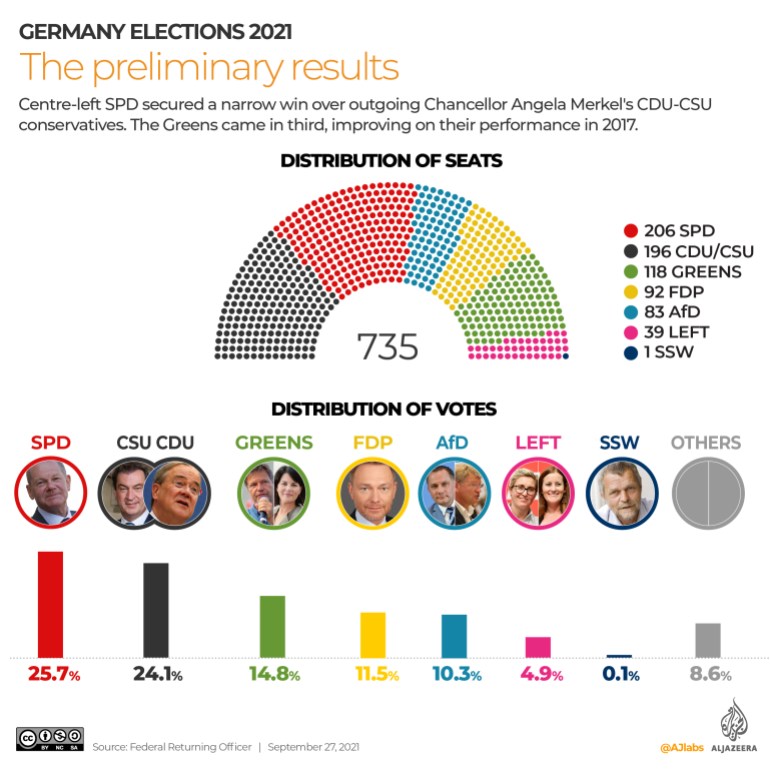 Preliminary results from the federal returning officer put the SPD at 25.7 percent and the CDU/CSU at 24.1.

Meanwhile, Annalena Baerbock’s Green Party is expected to increase its vote share by a third to 14.8 percent, and Christian Lindner’s free-market Free Democrats (FDP) is projected to reach 11.5 percent.

On Monday, Scholz said the SDP, Greens and FDP had all gained votes and had a “clear mandate” to form the next government, which he hopes can be concluded by Christmas.

The Greens’ Baerbock expressed disappointment that her party did not make larger gains, but reiterated that climate protection would form the basis of any coalition agreement.

According to Dresden-based political scientist Werner Patzelt, the mandate is “very unclear”.

He told Al Jazeera: “It is neither a mandate for the Social Democrats to go on with social democratic policymaking, the Green Party to put the focus exclusively on climate politics, nor the FDP to make sure that social justice policy and climate policy stays within the framework of a liberal market economy.

“The only thing which is clear is that most people wanted Olaf Scholz to become the next chancellor.”

The largest party is not guaranteed to form a government, which means the CDU/CSU could yet form a coalition, most likely a black-green-yellow “Jamaica” alliance with the Greens and FDP.

Negotiations between various parties are expected to last months, with Merkel to remain as interim chancellor until a new government is formed.

Electoral maps of Germany showed the SPD sweeping across much of the north and west of the country.

Exit polls analysis pointed towards the CDU losing approximately 1.4 million votes to the SPD and more than 800,000 to the Greens, which many party insiders have blamed on the underwhelming and gaffe-prone campaign of leader Armin Laschet.

“Laschet was the face of a party which no longer enjoys popular support. And he was not in a position to change this course because he was elected in order not to change [that of] Angela Merkel … So he had no choice. He was only the sad face of a mission impossible,” said Patzelt.

In Merkel’s Baltic Sea constituency, which she held since she entered parliament in 1990, the CDU dropped 14 points, losing its directly elected seat to a 27-year-old SPD candidate.

The far-right Alternative for Deutschland (AfD) is predicted to achieve 10 percent, down from 12 in 2017.

The party nevertheless consolidated its strength in the country’s southeast, capitalising on the conservatives’ collapse and increasing its share of directly elected candidates in Saxony and Thuringia.

The leadership of the socialist Left party has called for a “reinvention” after it lost almost half its support, failing to clear the parliament’s threshold of 5 percent. Its three directly elected seats will still qualify the party to enter the Bundestag, but a left alliance with the SPD and Greens is mathematically impossible.

The conservative bloc is meeting today in Berlin to discuss its historic defeat, with local media reports suggesting that fractures and recriminations have already emerged about whether the party should seek to enter government again.

There has been particular criticism from figures within the Bavarian CSU, whose leader Markus Soder has scarcely hidden his anger at being snubbed as chancellor candidate for the far less popular Laschet.

“Yes, it was a defeat,” Soder said in Munich on Monday, calling the outcome a “disappointing result for the entire Union.”

Michael Kretschmer, the CDU’s leader in Saxony, called on his party to accept its loss with humility. “I see a clear will of the electorate, which has made it clear that the Union is not the first choice this time,” he told local radio.

The Greens and FDP are well-positioned to be kingmakers, but will have to iron out substantial policy differences.

FDP leader Christian Lindner, who collapsed talks for a “Jamaica” coalition in 2017, has expressed a clear preference to work with the CDU/CSU.

His party is expected to demand the finance ministry, and has promised tax cuts and strict fiscal discipline – which runs contrary to the Greens and SPD’s plans to spend heavily on climate protection and social welfare.

Green co-leader Robert Habeck told local media on Monday that his party would enter talks with the FDP first, saying that “the parties that are initially furthest apart [should] see if they can manage it together.”