Polls in Germany have closed in one of the most unpredictable elections in its recent history, with Angela Merkel’s conservatives and the centre-left Social Democrats in a tight race for her crown as she prepares to leave the political stage.

Tens of millions of voters headed to polling stations on Sunday to determine the country’s next government and the chancellor who will lead it.

The election is the first since the county reunified in 1990 that Merkel will not run in as a candidate.

JUST IN: The first exit polls for #btw21 are in and show the CDU/CSU and SPD in a dead heat: pic.twitter.com/EeiQJ6B73R

Christian Democrats’ (CDU) Armin Laschet and Social Democrats’ (SPD) Olaf Scholz are frontrunners in the race to replace Merkel as the country’s next chancellor, as she prepares to leave office after 16 years in power.

First projected results put Laschet’s conservative bloc a whisker behind the Social Democrats. The CDU/CSU bloc won 25 percent of the vote, their weakest result in a post-war federal election.

“The SPD has the mandate to govern. We want Olaf Scholz to be chancellor,” SPD Secretary-General Lars Klingbeil said shortly after the first exit polls.

Laschet said his party could not be satisfied with the election results but that he would do everything possible to build a conservative-led government.

“We cannot be satisfied with the results of the election,” Laschet told his supporters.

“We will do everything possible to build a conservative-led government because Germans now need a future coalition that modernises our country,” he said. “It will probably be the first time that we will have a government with three partners.”

Sandra Plümer, a political researcher at the Duisburg based NRW School of Governance told Al Jazeera that the SPD is “currently ahead, even if the polls can still change in the course of the evening”.

“So the chances [of Scholz becoming chancellor] are good for now,” Plümer said.

“But now it also depends on who claims mandate for government and who ultimately leads the coalition.”

A tight result would mean that either the SPD or CDU could lead a governing coalition.

“It has already happened three times in German history that the party with the most votes did not provide the chancellor – so we have to wait and see”,  Plümer said. 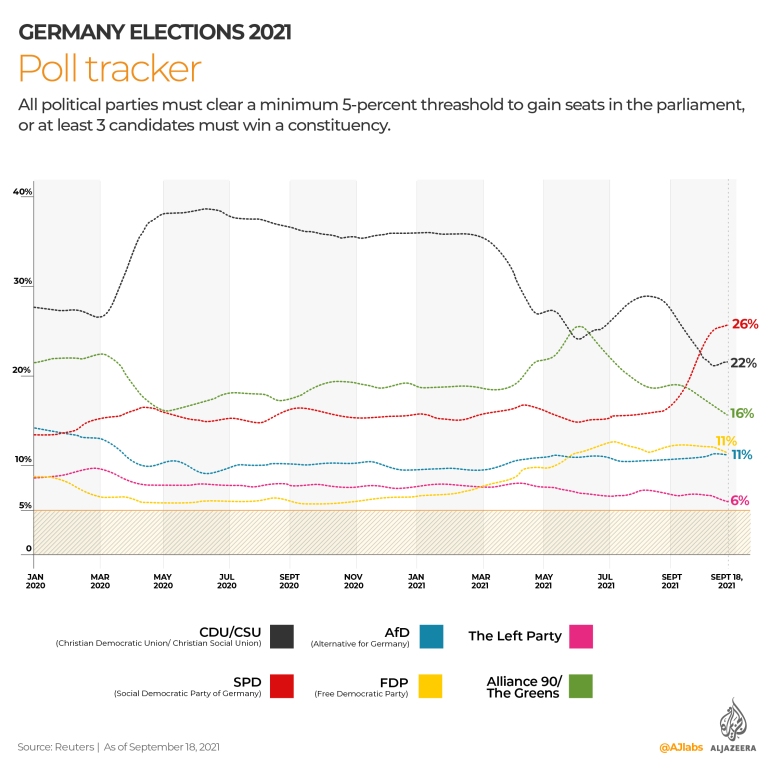 The small margin indicates the distribution of seats in the Bundestag will be very close, under Germany’s dual voting system where voters choose both an individual candidate, and a party.

Given the exit poll predictions, putting together the next coalition government for Europe’s biggest economy could be a lengthy and complicated process. Merkel will remain as a caretaker leader until a new government is in place.

The electoral system typically produces coalition governments but post-World War II Germany has never previously seen a winning party take less than 31 percent of the vote – or the Union bloc score less than that.

The environmentalist Greens have been predicted to make an historic breakthrough, winning 15 percent of the vote, becoming the third biggest political group in the parliament.