The two Canadians who were imprisoned by Beijing for nearly three years have returned home, local media has reported, where Prime Minister Justin Trudeau received them.

The Prime Minister’s Office did not offer an immediate comment.

“CSIS joins all Canadians in welcoming you back to Canada.”

CSIS joins all Canadians in welcoming you back to Canada.

Kovrig and Spavor were picked up in December 2018 on charges of espionage, shortly after Canadian authorities arrested telecoms giant Huawei’s chief financial officer, Meng Wanzhou on a US warrant.

The daughter of Huawei founder Ren Zhengfei, Meng was accused of bank fraud in the US in connection with violating sanctions against Iran.

After more than 1,000 days under house arrest in Canada, she was allowed to go home after a deal was reached with US prosecutors to end the fraud case against her.

The two Canadians were released on Friday a few hours after Meng, Trudeau has said.

“These two men have been through an unbelievably difficult situation, but it is inspiring and it is good news for all of us that they are on their way home to their families,” Trudeau told reporters in brief remarks on Friday.

Trudeau said that Kovrig and Spavor were accompanied home by Canada’s ambassador to China, Dominic Barton.

“I know that there’s going to be time for reflections and analyses in the coming days and weeks. But the fact of the matter is, I know that Canadians will be incredibly happy to know right now, this Friday night that Michael Kovrig and Michael Spavor are on the plane and they are coming home.”

In a statement, US Secretary of State Antony Blinken welcomed the release, “after more than two-and-a-half years of arbitrary detention”.

“We are pleased that they are returning home to Canada.”

Both Kovrig and Spavor were put on trial in March of this year.

In August, Spavor was sentenced to 11 years in prison, while there had been no decision in Kovrig’s case.

Their families at the beginning of September led hundreds of supporters marching 7,000 steps through the Canadian capital – the same number Kovrig said in letters to his family he walked in his small cell every day – to bring attention to their detention.

Representatives of 26 countries had also gathered outside the building in Beijing where his closed-door trial was held in March.

Canadian and other diplomats were also barred from attending Spavor’s trial in the northern Chinese city of Dandong.

The two Canadians had almost no contact with the outside world since their detention, and virtual consular visits only resumed in October 2020 after a nine-month hiatus that authorities said was due to the coronavirus pandemic.

“This has been a very long road, a worrisome road of over a thousand days,” she said.

But she also said that the episode has strained relations between Ottawa and Beijing, adding that the issue “is not going away anytime soon”.

“Where do we go from here in terms of the relationship between Canada and China?”

Although Beijing has insisted that the two cases were not linked, Trudeau’s Liberal government accused China of engaging in “hostage diplomacy”. Trudeau was not asked whether the two countries had struck a bilateral deal.

“I want to thank our allies and partners around the world in the international community who have stood steadfast in solidarity with Canada and with these two Canadians,” Trudeau said. 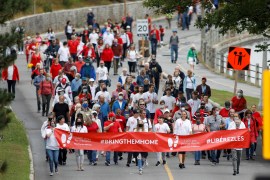 Beijing slams ‘gross interference’ by Canada as US expresses support for Canadians held in China amid Huawei dispute. 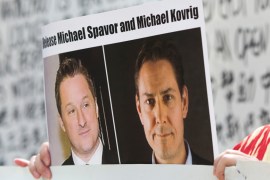 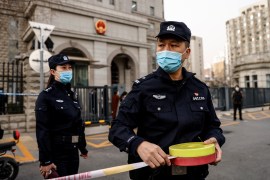 Diplomats refused access to espionage trial of Canadian who has been held in detention for 833 days.