London, United Kingdom – The murder of a 28-year-old teacher in a London park has reignited a national conversation over women’s safety, six months after the death of Sarah Everard, who was killed by a police officer, topped the United Kingdom’s political agenda.

Sabina Nessa, a primary school teacher, was killed a week ago on the evening of September 17 while walking in Cator Park in Kidbrooke, an area in the capital’s southeastern Borough of Greenwich.

It is understood that she was on her way to meet a friend at a bar less than a 10-minute walk away from her home on Astell Road when she was attacked at about 8:30pm, according to London’s Metropolitan Police Service (Met).

Her body was found by police officers in Cator Park the following afternoon, nearly 24 hours later, close to a local community centre.

A post-mortem carried out on Monday proved inconclusive.

On Thursday, a 38-year-old man was arrested in London on suspicion of murder. He remains in custody.

Police have also released images of another man they wish to speak to in connection with the case.

Officers have appealed for any witnesses or individuals with information of the incident to contact them.

“We know the community are rightly shocked by this murder – as are we – and we are using every resource available to us to find the individual responsible,” Joe Garrity, the detective inspector leading the Met’s investigation, said in a statement.

As the Met’s probe continues, calls are growing for authorities to tackle what campaigners say is an “epidemic of violence towards women in the UK”.

Emma Kay, co-founder of WalkSafe, a free mobile app aimed at safeguarding women in public spaces, said many women have been killed by men in the UK since March, when Everard’s murder by a Met officer shocked the nation.

Everard was 33. Wayne Couzens, 48, has pleaded guilty to murdering her and will be sentenced on September 29.

So far this year, at least 108 women in the UK have been killed by men, or in instances where a man is the principal suspect, according to Counting Dead Women, a group that tracks femicide in the country.

“Enough is enough,” Kay told Al Jazeera. “UK women are calling for action. We must be able to walk home safely and live without violence in our own homes.”

Kay said “a police and court system that protects women” was needed, as well as “concrete safety initiatives” such as improved CCTV and a free or subsidised transport system.

Andrea Simon, director of the End Violence Against Women Coalition (EVAW), said it was “devastating” that little had been done to address male violence against women despite widespread demands for action after the Everard tragedy.

The criminal justice system was too slow in responding to violence against women, she said, and routinely fails to prosecute rape and domestic abuse cases.

She also said support services should be granted more funding.

“We must not risk viewing these murders as isolated incidents. Violence against women is so deeply normalised that women must constantly carry out personal safety work – assessing our surroundings, researching the safest route, carrying keys in our hands and sharing our location with friends,” Simon told Al Jazeera.

“We need an approach that addresses the root causes of male violence against women and the attitudes that minimise and tolerate abuse.”

‘Every solution is reactive’

Politicians including London Mayor Sadiq Khan and Member of Parliament Janet Daby, who represents the constituency where Nessa was killed, have also demanded urgent action.

On Thursday, Khan called for officials to make misogyny a hate crime under UK law and criminalise harassment of women in public spaces.

Daby told Parliament on Wednesday that Nessa’s life had been brutally taken by “misogynist violence”.

“How many women’s lives must be stolen before this government takes serious action?” she said.

Sabina Nessa was a 28 year old teacher, described as "kind, caring, and dedicated to her pupils".

She was killed on Friday. She was a woman in a public space – and that simple fact made her vulnerable.

The government has said it is prioritising reducing violence against women, citing its Tackling Violence Against Women and Girls plan introduced in July.

But campaigners said such efforts were overdue, citing Nessa’s killing as evidence.

“Every solution we offer is reactive … yet we are never prepared to have a hard conversation in the mainstream about why this is happening. We never want to talk about masculinity and the way our society develops it.

“Women and marginalised genders aren’t safe from male violence no matter what we do.” 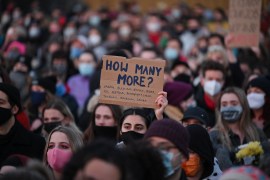 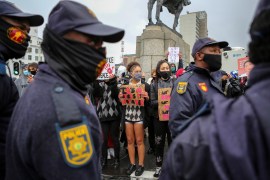 A woman is killed every four hours in South Africa. Here are the stories of some of those killed on June 5 last year. 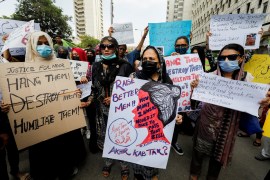 Activists are urging officials to increase accountability for perpetrators and boost support for survivors. 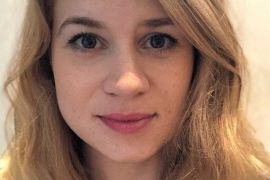 Prosecutor says victim was a ‘total stranger’ to the officer who has pleaded guilty to kidnap, rape and murder.