Planes have been grounded on the island of La Palma in Spain’s Canary Islands due to a fresh volcanic eruption, in the first cancellation of flights since the Cumbre Vieja volcano came to life this week.

New evacuations were also ordered on Friday as large explosions and new openings were reported at the volcano, which spewed a large cloud of thick, black ash into the air.

There were seven flights scheduled for Friday operated by Binter, Canaryfly and the national carrier, Iberia, but all were scrapped.

“It is not yet possible to say when we can resume flights,” Spanish carrier Binter said on Twitter.

“No one knows what scenario comes next … The cloud of ash shoots up, cancelling all flights in the area … When the second crater erupted, we heard a sonic boom, windows shutter, a real sense of fear of what is to come,” he said.

The compulsory evacuation order was issued in parts of La Palma island “given the increased risk for the population due to the current eruptive episode”, the regional government said.

Video footage from the civil guard showed a garden in the area completely covered in thick ash.

The speed of the lava flowing from the mouth of the volcano has steadily slowed its pace in recent days, and experts are hoping it will not reach the coast.

If the molten lava reaches the sea, experts fear it will generate clouds of toxic gas into the air, which will also affect the marine environment.

Authorities set up a no-go zone this week to head off curious onlookers. 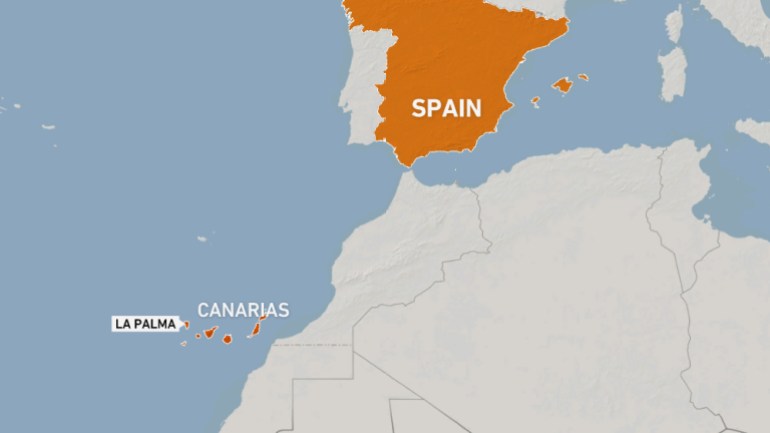 Hundreds of homes and large swaths of land have been destroyed by the eruption, and regional authorities estimate the damage to be more than 400 million euros ($470m).

No casualties have been reported so far.

The Spanish government plans to designate the island a disaster zone and to draw up a comprehensive reconstruction plan, Prime Minister Pedro Sanchez said on Friday.

The last eruption was in 1971 when another part of the same volcanic range – a vent known as Teneguia – erupted on the southern side of the island. More than 20 years earlier, the Nambroque vent erupted in 1949.