United States immigration officials said they have launched an investigation after images emerged of mounted US border guards appearing to use horse reins to threaten migrants camped along the Texas-Mexico border.

Photos and videos showed border guards on horses chase migrants near an encampment under a bridge connecting Del Rio, Texas with Ciudad Acuna, Mexico. That came as officials sought to expel the mostly Haitian migrants from the camp, which had housed as many as 12,000 people in recent days.

US Border Patrol chief Raul Ortiz said the incident was being investigated to make sure there was not an “unacceptable” response by law enforcement. He said officers were operating in a difficult environment, trying to ensure the safety of the migrants while searching for potential smugglers.

Department of Homeland Security Secretary Alejandro Mayorkas said the long reins are used by mounted officials to “ensure control of the horse”.

“But we are going to investigate the facts,” he said during a news conference in Del Rio.

On Tuesday, Mayorkas said the images “horrified” him.

The White House criticized the use of horse reins to threaten Haitian migrants after images circulated of a U.S. border guard on horseback charging at migrants near a riverside camp in Texas https://t.co/pma6y9RJVq pic.twitter.com/xb4X9doX6f

“I don’t think anyone seeing that footage would think it was acceptable or appropriate,” White House spokeswoman Jen Psaki told reporters.

“I don’t have the full context. I can’t imagine what context would make that appropriate,” she added.

US officials have sought to clear the camp and close the border between Del Rio, Texas and Mexico as crossings surged in recent days.

Many of the Haitians present had fled their homeland following the 2010 earthquake, initially heading for South America before heading north.

On Sunday, the first flight of Haitian migrants from the camp landed in Haiti. Repatriation flights were set to continue throughout the week.

US authorities have used the controversial, pandemic-related Title 42 health rule, created under former President Donald Trump, to expel many of the migrants without offering them the chance to seek asylum.

Rights groups have blasted the Biden administration’s actions, saying the returns are inhumane given the dire security and economic situation in Haiti.

In a statement, the UN High Commissioner for Refugees Filippo Grandi said he was “shocked by images of the deplorable conditions” of the makeshift migrant camp in Texas.

“The summary, mass expulsions of individuals currently under way under the Title 42 authority, without screening for protection needs, is inconsistent with international norms and may constitute refoulement,” Grandi said according to the statement.

This morning I requested a federal emergency declaration from Biden for the State of Texas.

His failure to enforce immigration laws & to halt illegal crossings on a dam on federal property created a dire situation on the Texas-Mexico border.

Meanwhile the Republican Governor of Texas Greg Abbott blamed the Biden administration for the surge in migrants to his state and said authorities would arrest and jail undocumented migrants.

Haitian President Jovenel Moise was assassinated in July, thrusting a country already grappling with political turmoil into deeper uncertainty. A month later, a 7.2 magnitude earthquake struck, killing more than 2,000 people and devastating the southern region of the small Caribbean island.

On Monday, US Secretary of State Antony Blinken spoke to Haitian Prime Minister Ariel Henry over the phone about repatriating migrants on the US southern border, the State Department said in a statement. 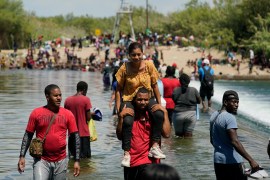 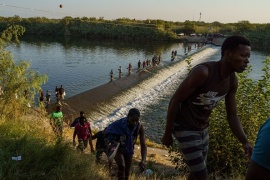 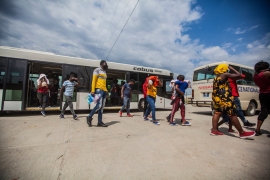