Australia has recently cancelled a multibillion-dollar order for diesel-electric submarines from France in favour of nuclear-powered vessels from the United States and the United Kingdom, setting off an unprecedented diplomatic dispute between the allies.

Canberra scrapped the $66bn order on Wednesday as it announced it was joining a new security alliance – dubbed AUKUS – with the US and the UK in an apparent attempt to counter China.

France has since recalled its ambassadors to the US and Australia, saying the move was a “stab in the back”. French Foreign Minister Jean-Yves Le Drian in an interview on France 2 television decried the “duplicity, disdain and lies” behind the Australian move.

What is the difference between the French submarines and those the UK and US will supply? And, is a nuclear-powered submarine better than a conventional one?

Submarines can either be diesel-electric or nuclear-powered. Either type can hold nuclear warheads.

Here’s how they differ. Diesel-electric submarines use electric motors charged by diesel engines to move. These engines require air and fuel to operate, which means they need to resurface more frequently, making them easier to detect. When running on electric mode, these submarines are much quieter than when the diesel engines are running.

Most submarines today are conventionally powered (diesel-electric) and tend to be smaller and cheaper to maintain.

Nuclear-powered submarines run off of steam generated by an onboard nuclear reactor that turns the turbines. Having a source of power that runs for so long means that they can remain submerged for years – effectively limited only by the food and water needs of their crews – limiting their detection.

These tend to be larger but require more expensive infrastructure and maintenance.

Common submarine acronyms are listed below:

Who has nuclear-powered submarines?

There are six countries with nuclear-powered submarines. Under the new security pact, the US and UK will enable Australia to become the seventh.

Australia has stressed that the submarines being nuclear-powered does not mean they will be carrying nuclear warheads.

The first nuclear-powered submarine was built by the US in 1954. Named the USS Nautilus, the 97m (319-foot) vessel was much larger than the diesel-electric submarines that preceded it. According to the International Institute for Strategic Studies (IISS), all of the US’s 68 operational submarines are nuclear-powered, and 14 of them are strategic nuclear-powered ballistic missile submarines (SSBNs).

In 1957, the Soviet Union launched its first nuclear-powered submarine, the K-3 Leninsky Komsomol. Today, Russia has 49 submarines, including 29 nuclear-powered ones, of which 11 are capable of launching long-range ballistic missiles.

China built its first nuclear-powered submarine in 1974. With the world’s largest armed forces, China has increasingly worked to advance its naval capabilities. Beijing has at least 59 operational submarines, 12 are nuclear-powered and half of those are SSBNs. 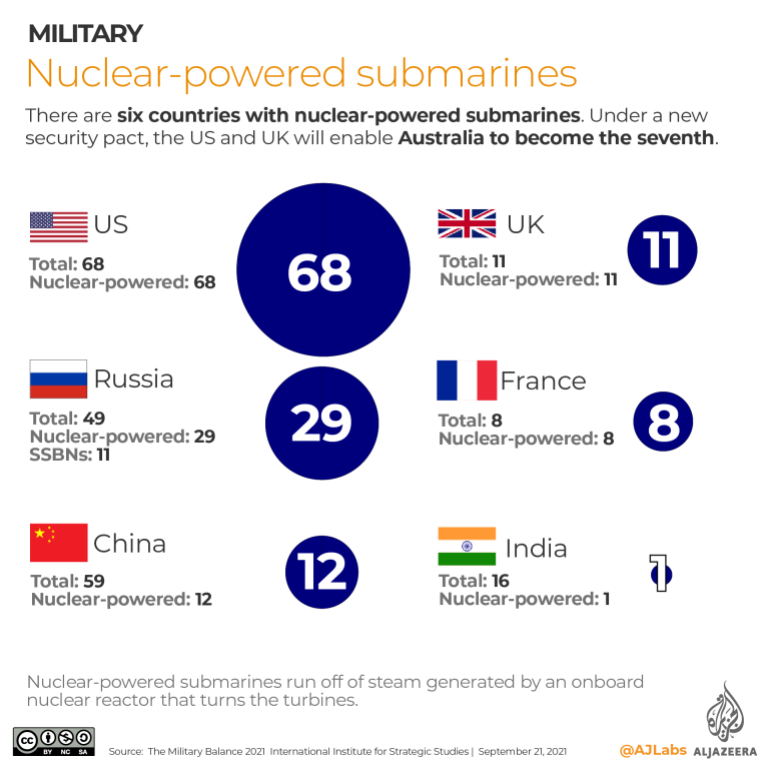 According to the IISS, 42 countries have at least 485 military submarines – mostly diesel-electric.

With 71 submarines, North Korea operates one of the world’s largest submarine fleets, of which at least 40 are older Sang-O and Sang-O II-Class coastal submarines.

North Korea has criticised the AUKUS deal, describing it as “extremely undesirable and dangerous” and warning of unspecified countermeasures if its security is undermined.

On September 15, South Korea, which has at least 18 of its own submarines, said it had successfully tested a submarine-launched ballistic missile (SLBM) becoming the first country without nuclear weapons to develop such a system.

Other countries that have tested or developed SLBMs, including China, France, India, North Korea, Russia, the UK and the US, and have typically designed them to carry nuclear warheads.