A river of lava gushing from an erupting volcano in Spain’s Canary Islands has forced authorities to evacuate hundreds more people on the crisis-hit island of La Palma.

About 500 people were evacuated from the El Paso municipality late Monday and early Tuesday after a new stream of lava started flowing from another crack on the slope of the Cumbre Vieja volcano, according to local officials.

The new fissure opened after what the Canary Islands Volcanology Institute said was a 3.8-magnitude earthquake late on Monday.

The volcano first erupted on Sunday after a week of thousands of small tremors, shooting lava hundreds of metres into the air and sending molten rock tumbling downhill across the island’s countryside.

“The lava on its path to the sea has been a bit capricious and has diverted from its course,” El Paso’s mayor Sergio Rodriguez told state broadcaster TVE.

Experts said that if and when the lava reaches the sea, it could trigger more explosions and clouds of toxic gases.

Marine authorities have set up an exclusion zone spanning 3.7 kilometres (two nautical miles) at sea in the area where the lava is expected to arrive.

The move was taken to “prevent onlookers on boats and prevent the gases from affecting people”, Mariano Hernandez, the president of the island’s council, told the Cadena SER radio station.

As of Tuesday morning, the lava has covered 103 hectares (255 acres), according to data from the European Union’s Copernicus Emergency Management service.

Night shift for our #RapidMappingTeam

They released at 04:14 UTC a grading map for the #LaPalma eruption using #Sentinel1🇪🇺🛰️ & COSMO-SkyMed radar images

The lava flow was initially expected to reach the sea on Monday evening, but its speed has reduced in recent hours.

Authorities do not expect it to arrive at the shore before Wednesday at the earliest, the Spanish private news agency Europa Press reported.

Scientists monitoring the lava measured it at more than 1,000C (more than 1,800F), and believe the flows could last for weeks or months.

The volcano has been spewing out between 8,000 and 10,500 tonnes of sulfur dioxide a day, according to the Canary Islands Volcanology Institute.

No fatalities or injuries have been reported to date, but hundreds of homes have been destroyed since Sunday.

Emergency authorities have said residents should not fear for their safety if they follow recommendations.

He said the damage amounted to more than 400 million euros ($470 million), which qualifies the archipelago for emergency EU aid, as he described the region as a “catastrophe zone”.

Spain’s King Felipe VI and Queen Letizia are due to visit the affected area on Thursday. 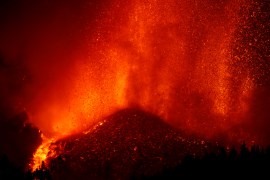 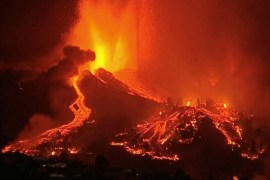 Some 100 houses have been destroyed so far near Cumbre Vieja, one of most active volcanic regions of Spanish islands. 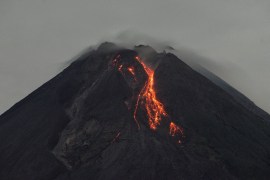 Ash from the eruption blanketed several villages and nearby towns, officials said.