Russia’s opposition has denounced the parliamentary election as a sham, after results handed the pro-Kremlin United Russia party victory, while the European Union and Germany also expressed reservations about the electoral process.

With 98 percent of ballots counted on Monday, the Central Election Commission said United Russia had won nearly 50 percent of the vote, with its nearest rival, the Communist Party, at just less than 20 percent.

Kremlin critics denounced the results as rigged, pointing to alleged large-scale irregularities and violations during the three-day poll.

Meanwhile, EU foreign affairs spokesman Peter Stano said on Monday, “What we have seen in the run-up to these elections was an atmosphere of intimidation of all the critical independent voices.”

“There was no international independent observation … but independent local observers were reporting a lot of irregularities during these elections.”

German government spokesperson Steffen Seibert told reporters in Berlin that allegations of violations must be “taken seriously and should be clarified”.

Golos, an election watchdog accused by Russian authorities of being a foreign agent, recorded thousands of violations, including threats against observers and ballot stuffing, blatant examples of which circulated on social media.

“With such a colossal number of violations, the results of the State Duma elections cannot be recognised as clean, honest or legitimate,” said Lyubov Sobol, an ally of jailed Kremlin critic Alexey Navalny.

The scale of United Russia’s victory means the party will have more than two-thirds of deputies in the 450-seat State Duma lower house of parliament.

The Kremlin hailed the result, saying United Russia, which President Vladimir Putin helped found, had confirmed its role as the leading party.

It said the election had been competitive, open and honest.

“The Communists have improved their results and there are new parties that have done well,” said Kremlin spokesman Dmitry Peskov.

The build-up to Russia’s parliamentary poll was marred by controversy, with concerns about an electronic voting system used in seven of Russia’s 80-plus regions.

Critics claimed the system, lauded by Putin, lacked transparency and the tools to verify voters.

Several opposition figures were banned from taking part in the poll, while critical media and non-governmental organisations were targeted by authorities.

The Kremlin also moved to block a tactical voting campaign organised by Navalny’s allies that was designed to drain support from United Russia.

Authorities pressured technology giants Apple and Google to remove an app featuring the so-called “smart voting initiative” from their Russian online stores as voting got under way on Friday. 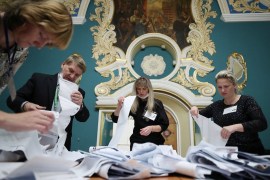 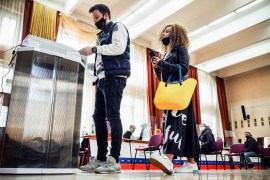 United Russia party is set to win the polls after Kremlin critic Alexey Navalny’s allies barred from running in June. 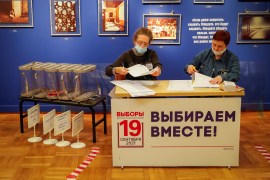 Parliamentary and local polls in the world’s largest country spread across 11 time zones began on Friday.