US President Joe Biden has approved a declaration of emergency for the state of California and federal assistance to help firefighters combat the Caldor Fire – a sprawling blaze near the popular tourist destination of Lake Tahoe.

The White House announced the moves late on Wednesday as crews fought back the wind-driven wildfire, managing to save South Lake Tahoe, the largest town along the rim of North America’s largest alpine lake.

Late Wednesday, fire crews deployed from around the country had managed to carve so-called containment lines around just 23 percent of the fire, which had destroyed at least 700 homes and other buildings and forced the evacuation of an estimated 50,000 people.

Jason Hunter, a spokesman for the Caldor incident command, told Reuters news agency that crews had “steered the fire away” from South Lake Tahoe, where more tightly packed buildings could have spelled further devastation.

The fire was now moving to the northeast, towards the California-Nevada border. Evacuations have been ordered in the neighbouring state.

After three days of strong winds accelerated the spread of the fire, authorities offered tentative hope that calming winds going into Saturday could calm the blaze.

The Caldor Fire is one of more than 24 fires currently burning in California, where climate change has created increasingly tinderbox-like conditions over the last 30 years.

Nearly 4,200 personnel and a squadron of more than 24 water-dropping helicopters have been assigned to the Caldor fire, the cause of which is being investigated.

No deaths have been reported but three firefighters and two civilians were injured in recent days.

During an operational briefing for firefighting personnel on Wednesday, the team’s safety officer warned that “fatigue can and will set in”, and urged crews to pace themselves for what was still a long, arduous battle. 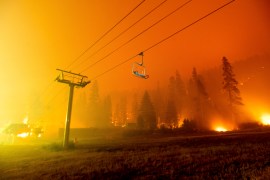 Some 22,000 people were ordered out of their homes, joining tens of thousands of others trying to escape the blaze. 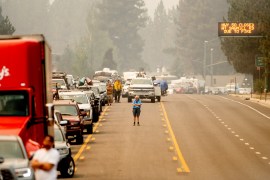 The resort area is in the path of California’s Caldor Fire, which is raging due to strong winds and dry conditions. 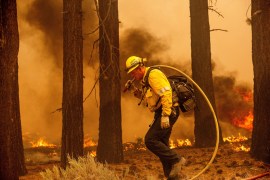 The wildfire, which started on August 14, has scorched 808sq km (312sq miles) in the Lake Tahoe area.