Kabul, Afghanistan – A member of the Taliban government is calling for action and help from the international community, including donor agencies, to help displaced Afghans ahead of the approaching winter.

In an interview with Al Jazeera, the Taliban’s minister for refugees, Khalil-ur-Rahman Haqqani, said thousands of Afghans had been displaced, including an estimated 20,000 from Panjshir Valley who had come to Kabul.

“Winter is just weeks away, we must act quickly,” Haqqani said. “Everyone who cares about the people of Afghanistan should come together to help those who were displaced.”

Aid groups have warned in recent days that Afghanistan faces an “impending humanitarian crisis” if aid cannot be delivered to the country.

Poverty could soar to 97 percent by the middle of next year, according to the United Nations’ World Food Programme, as famine and drought force thousands to move to the cities in search of livelihoods.

Haqqani told Al Jazeera his government hopes to support the internally displaced people (IDPs) in phases, now that “there is peace in Afghanistan and everyone can return home”.

The first would be providing assistance to IDPs to go back to their towns and “rebuild their homes if they had been damaged”.

The next phase would be to designate support zones in the provinces from which IDPs fled, to provide returnees with facilities, employment opportunities, and other services.

The plan Haqqani discussed envisions that the Ministry of Refugees will be in charge of streamlining and allocating all aid flowing into Afghanistan in order to have one point where all needs are reported, reduce waste, prevent corruption, and ensure that aid is delivered to those most in need.

The Taliban has been facing an extreme cash crunch since it swept into power in Afghanistan a little over a month ago, with billions of dollars of its foreign reserves frozen by the US and international finance organisations.

Haqqani admitted that there was a “cash-flow problem but God willing, we will slowly overcome this problem as well”.

But any international community interactions with Haqqani will be difficult as the US government has designated him a “global terrorist” and placed a $5m bounty on him. He has also been sanctioned by the UN, with charges including associating with al-Qaeda.

The Taliban says the sanctions should have been removed following the signing of a deal between it and the US in Qatar last year.

On Friday, the UN High Commissioner for Refugees Filippo Grandi called on countries to engage with the Taliban or risk a humanitarian crisis.

Speaking in Islamabad, the capital of neighbouring Pakistan, Grandi said the international community should not only provide aid to the poverty-stricken nation but also accept Afghan refugees.

On Wednesday, Pakistan’s national security adviser, Moeed Yusuf, also called on the international community to engage with the Taliban or risk a return to instability in Afghanistan.

Prior to the Taliban takeover, one-third of the country’s gross domestic product (GDP) came from foreign funding.

No government has yet recognised the interim Taliban government. 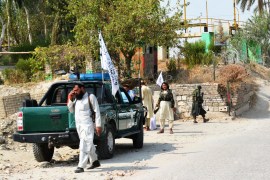 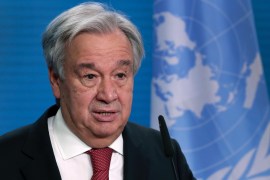 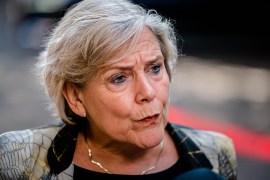 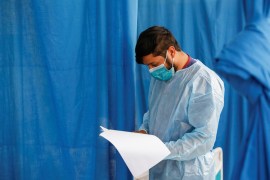